Thirty years ago, TIME named Planet Earth its Man of the Year, featuring a cover by the artist Christo of the earth encased in plastic on a beach in Long Island, NY.

For this week’s special issue cover on climate change, TIME returned to sand — albeit this time on the shores east of Toyko.

Japanese sand sculptor Toshihiko Hosaka and his seven-person team spent 14 days creating the 98-foot by 65-foot TIME cover on the playground site of the former Iioka Junior High School in Iioka, Asahi. The school, just a few hundred yards from the Pacific, closed after the East Japan Earthquake in 2011. But the natural disasters that threatened Hosaka’s project flowed from the slower, but no less deadly changes the cover raises a warning about.

“The biggest enemy of my work is the heat,” says Hosaka, who started building the sculpture on August 9, when temperatures hit 96. “I have been making sand sculptures for over 20 years and most of my work is outdoors. I feel that the heat has increased compared to before.”

Hosaka spent one day preparing the ground and two days laying out the design. The sculpture process involves raking the sand for 8 hours a day, which the team did for seven days, followed by two days of fine adjustments. The entire cover was then photographed with a Phantom 4 Pro drone camera capable of shooting 4k video.

“We sculpt letters, frames, and earth parts using shovels, forks, and rakes used for gardening,” says Hosaka, who graduated in sculpture from Tokyo National University of Fine Arts and Music. “It was necessary to always moisten because if the ground was dry it did not form. It is a huge work. I carved it a little and shot it with a drone to adjust the balance and depth. A dust spray is sprayed thinly on the finished part. This spray is used for road construction. This will withstand some rain and dryness.”

The typhoon that swept across Japan in mid-August carried more than “some rain,” however. With climate change, extremes in weather have grown more intense and frequent across the globe, and Typhoon Krosa could have erased the image Hosaka and his team had labored over for two weeks “We were all worried,” the artist recalls. “But the course changed a little and we were able to avoid a direct hit.” 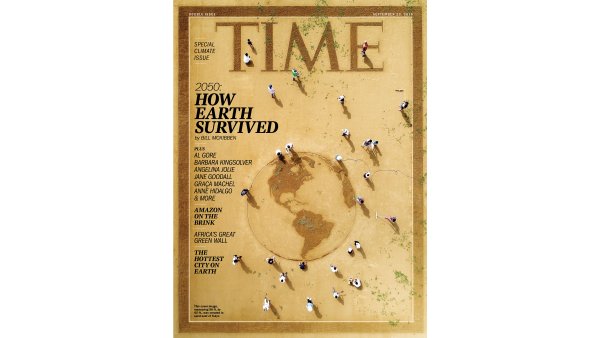 Why TIME Devoted an Entire Issue to Climate Change
Next Up: Editor's Pick