Julio Gomez has flown the MD-80 for his entire 20-year career at American Airlines. But he can’t bring himself to make that final trip into the New Mexico desert.

“I just cannot take that airplane to its grave,” Gomez, 52, said of the iconic jets’ retirement flights on Wednesday. “It’s just too heartbreaking.” Instead, the veteran pilot made his closing flight late Tuesday.

The retirements mark the end of an era at American for the workhorse known as the Super 80, whose old-school design and noisy rear engines spawned a love-hate relationship among industry employees over the four decades it flew. The plane once provided the backbone of American, powering the carrier’s expansion through the end of last century on bread-and-butter routes such as Chicago to New York or Dallas to St. Louis.

The single-aisle jet could be challenging to fly, but it sharpened pilots’ skills and earned the loyalty of pilots like Gomez, who relished having more control over every aspect of the plane.

Airlines now have moved on to models with better fuel efficiency, additional seats and the latest technology, including a more computerized cockpit. The routes dominated by the MD-80s have been taken over by newer versions of jet families such as the Boeing Co. 737 and Airbus SE’s A320.

So on Wednesday, after 36 years, American will operate the last commercial trip of the MD-80, flying from Dallas to Chicago. It’s Flight 80.

American will ferry the last 24 of its MD-80 jets to a desert parking lot in Roswell, New Mexico. Two more will be donated to flight-training schools.

But it was the original MD-80, dubbed “Mad Dog” by pilots, that once seized the industry’s imagination when it was introduced by McDonnell Douglas Corp. It earned other nicknames through the years: “silver bullet,” for its polished aluminum fuselage; “Harley” because it was loud and fast; and “the Long Beach sewer pipe,” because it was manufactured in Long Beach, California, and had an extended length.

Two engines positioned on either side of the fuselage in front of the tail were so loud they made the plane easily recognized. While the pilots and first-class passengers enjoyed an unusually quiet ride up front, flight attendants complained about the noise of the two engines in coach.

“My husband used to say, ‘I can tell you’ve been flying the Super 80 because you are yelling when you are talking,’ ” said Jennifer Brissette, a 23-year flight attendant at American.

The airline, led at the time by Chief Executive Officer Robert Crandall, leased its first 20 of the new commercial jet from McDonnell Douglas in 1982, then quickly added 13 more. The airline began operating the aircraft the following year.

In March 1984, American placed what was then the largest-ever order for commercial aircraft, for 67 MD-80s with options to buy 100 more. The fleet got another boost when American acquired Trans World Airlines and its 104 MD-80s in 2001.

The planes had 12 first-class seats and 130 in coach, with two on one side of the aisle and three on the other. They flew routes of as long as 1,800 miles for American, and helped to launch the airline’s hub-and-spoke operating system.

Neil Roghair, an American pilot who flew Mad Dogs earlier in his career, recalls that it was a struggle to learn to land the MD-80 well, and it wasn’t a good plane at high altitudes.

American pilot Sam Mayer moved up to captain on the MD-80 in 1999 after a decade flying as a first officer on Boeing Co.’s 727 and then the 767 — both of which had a much higher level of cockpit automation.

“I remember thinking it was the most un-ergonomic cockpit I had ever seen, with switches and dials seemingly placed at random spots all over the cockpit, bearing no semblance to any other aircraft I had ever seen,” Mayer said. “When they talk about ‘seat of the pants flying,’ the MD-80 will be the last of the breed.”

The MD-80 lacked a central window post, so the compass was mounted behind the co-pilot’s seat to avoid interference from other equipment. Pilots could confirm display headings by looking into small flip-up mirrors atop the instrument panel and reading the compass setting.

“It’s almost as if they built the airplane and, at the very end, finished up and said, ‘We forgot to put the compass in,’” Kent Wien, an American captain who used to fly the MD-80, said in a video posted online about the plane. “It’s a relatively goofy system, but it worked.”

The MD-80 had other quirks. The interior of the planes would get so hot while sitting on airport tarmacs during the summer — particularly in sweltering Texas — that passengers weren’t allowed to board until the cooling system got the temperature below 90 degrees.

Air conditioning condensation would flow to the back of the aircraft and drip onto the flight attendant sitting in the plane’s tail cone. Many flew with an umbrella to keep from getting wet, said Brissette, who arranged to work a recent MD-80 flight for a final ride.

“You loved it and you hated it,” she said. “I would not purposely ever fly that plane again. Good riddance.”

Nonetheless, more than 1,100 American employees signed up to fly the Mad Dog on one of its final flights. Unable to accommodate the free trips, the carrier instead provided commemorative boarding passes for the MD-80.

Gomez was first hooked when he took a night flight on the jet when he was young. One glance into the darkened cockpit with its dazzling constellation of lighted dials and gauges was part of the reason he became a pilot.

He remained loyal to the Super 80, even passing up a promotion to captain on other aircraft so he could keep flying it. There’s no plane left that gives pilots the same sense of control as they input data manually instead of commanding on-board computers, he said.

“On the Super 80, you are figuring in your head, planning descents, when to start down, when to start reducing speeds,” Gomez said. “Your mind is always moving. With the MD-80, you’re flying.” 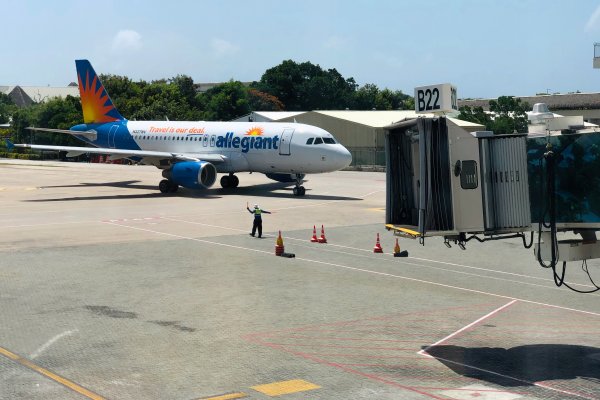 A Budget Airline Known for Packing in Passengers Tries a New Amenity: More Legroom
Next Up: Editor's Pick