Italy’s Stromboli volcano erupted on Wednesday, spewing ash and a huge cloud of smoke into the air and sending tourists and residents running for shelter.

The volcano, on a small island of the same name just off the coast of Sicily, erupted at around midday. The explosion caused vegetation fires and created a tower of smoke and ash more than a mile high.

Italy’s National Institute of Geophysics and Vulcanology said the explosion caused a pyroclastic flow (a fast-moving current of hot gas and volcanic matter) that extended for several hundred meters into the sea.

Elena Schiera, who was sailing on a boat with her family near the island when the volcano erupted, shared several videos of their escape from the cloud of smoke. “All of a sudden we heard a loud bang and saw a large black cloud spewing out of the Stromboli crater and pouring into the sea,” she told CNN.

The video shows the huge cloud of smoke advancing quickly just yards away from her boat. The caption reads: “Stromboli volcano eruption at 12:17…we survived miraculously. Moments of panic.”

Stromboli is one of Italy’s three active volcanoes, and one of the most active in the world. Wednesday’s eruption came barely two months after another eruption that killed a hiker near the summit on July 3.

No injuries or damage were reported this time.

Italy’s fire and rescue service said on Twitter: “A high intensity explosion in the centre-north section of Stromboli’s crater. Intervention by firefighters for widespread vegetation fires, teams on motorboats and helicopters. No one appears to be affected for now.”

According to the Italian news outlet La Repubblica Wednesday’s eruption was apparently not as strong as the eruption in July. Residents told CNN that firefighters were putting out the fires caused by the explosion with sea planes.

Marco Giorgianni, mayor from the neighboring island of Lipari, told La Repubblica: “The situation is under control, we have however activated all the civil protection procedures. I have banned the docking of non-public transport boats.”

“We were expecting this eruption, even if we didn’t know the exact day,” Gianluca Giuffrè, resident of the island’s town of Ginostra, told news agency Adnkronos. “But we knew that after July 3 the eruptive activity remained very high. There have since been several small explosions, and in the past week there have been lots of spills of volcanic sand.” 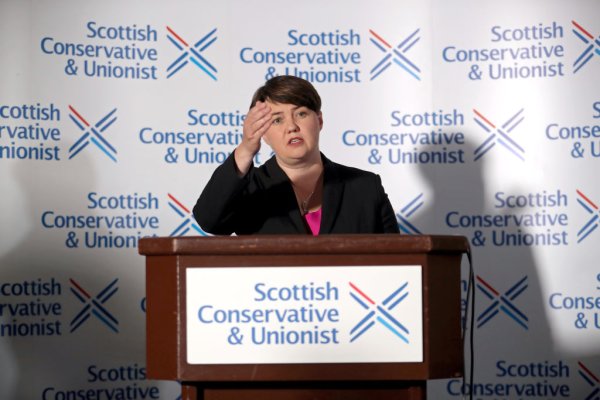 Why the Resignation of a Key Scottish Leader Is a Sign the U.K. Could Break Apart Over Brexit
Next Up: Editor's Pick