A ferry in the southern Philippines caught fire early Wednesday, killing at least two passengers while more than a hundred were rescued, according to the country’s Coast Guard.

At least 172 people were on board, including 136 passengers and 36 crew members, according to the Associated Press. A spokesperson for the Philippines Coast Guard said the number rescued was as high as 245, far more than the number listed on the vessel’s manifest.

A one-year-old girl and a 60-year-old male passenger were reportedly among those killed. The spokesperson said the Coast Guard did not have patrol vessels in the area and called on nearby boats to assist with the emergency, the AP reports.

By some accounts, it took hours for help to arrive.

According to local newspaper the Philippine Daily Inquirer, the ferry departed the province of Cebu at around 6 p.m. Tuesday and was headed for Dapitan City. The blaze was believed to have started in the engine room just after midnight.

As of 8 a.m. Wednesday, 102 passengers had been rescued and brought to hospitals, a disaster management officer in Dapitan said according to local news site Rappler.

The cause of the fire has yet to be determined.

Scores of people die yearly from ferry accidents in the Southeast Asian nation, which has a poor record of maritime safety. In August, 31 people were killed after three ferries sailing in bad weather conditions overturned. 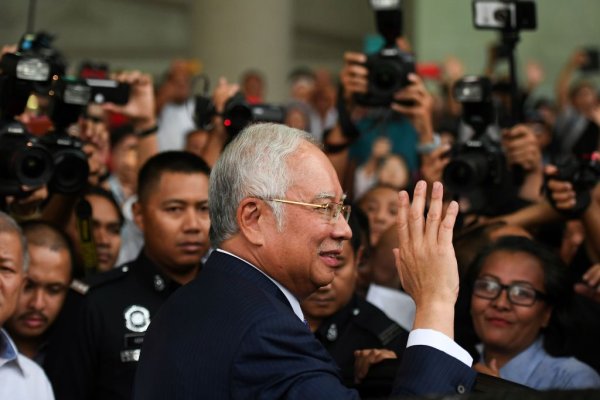 Malaysia's Najib Razak Back in Court for Biggest 1MDB Trial
Next Up: Editor's Pick