REVIEW: Mad Men Returns, with a California Dream (or Nightmare)

SPOILER ALERT: The following review of the season premiere of Mad Men uses specific examples and concrete information to substantiate points, because it is a review, which is a thing that, if you are the sort of person who is highly sensitive to spoilers, you should probably never read in advance of anything.

Each season, Mad Men expands its world, introducing new characters out of the blue (Bob Benson), putting familiar characters in new situations (Betty Draper, now Betty Francis) or revealing that once-peripheral characters are now central (Megan Draper née Calvet, Ted Chaough). In the season 7 premiere of Mad Men, “Time Zones,” there is a guest star appearance or two, but most notable is that a recurring guest character has been promoted to the role of series regular:

The state of California.

As I wrote after the season finale of season 6, California–which the show’s business and personal plots were both slouching toward by late 1968–has always had a special role in the Manhattan-centric Mad Men. It’s a place of reinvention, of experiment. It’s where Don Draper got a new identity (his Korean War namesake, and the original Draper’s wife Anna, were Californians) and where he proposed to his new wife Megan (in the aptly named “Tomorrowland”). It’s the antithesis to New York’s thesis. When characters have visited there over the years, they seem different–liberated, but also warped, refracted by the light. In season 3, when Don suggests a p.r. pitch for the razing of New York’s old Penn Station (a move later remembered as an architectural atrocity), he mentions that he’s recently been to California, where everything is “clean” and “new.” It’s a golden wrecking ball, clearing out old hierarchies and orders. It’s the future. It’s like Death in a Tarot deck–it represents change, which could mean a second chance for some characters and an ending for others.

“Time Zones” finds Don dealing with the consequences of the end of season 6, in which he was put on leave from Sterling Cooper & Partners for revealing his whorehouse-orphan childhood in a pitch meeting, he opened up to his kids about his real history, and he decided to stay in New York while Megan moved to Los Angeles for her acting career–to be “bicoastal.” As we pick up with Don, he’s dealing with the last of these, flying out to visit Megan. (In this way, all those much-scrutinized pre-season publicity photos, with their airplane imagery, were telling us something.)

Like a lot of Mad Men stories, the visit is a story whose significance is all in the details. It begins with sexiness and swagger: Don’s introduced to the beat of The Spencer Davis Group’s “I’m a Man,” and Megan picks him up wearing a powder-blue baby doll dress and driving an Aston Martin, as though she were a Bond Girl and James Bond all at the same time. But as the trip plays out, you see what you’re really watching: two people working very, very hard to convince themselves everything is all right. Outside her house, rising up from the valley, we hear the sound of coyotes.

I’ll spare you excessive plot detail, nor–as usual with a Mad Men premiere–do you really need it. As I wrote in my Time feature on Mad Men, the show has never been about wrapping up a plot, catching a criminal, or solving a riddle. It’s simply, like the “7 Up” documentary series, about taking a certain group of characters over a set span of time–the 1960s–and showing us who they are at the beginning and the end of it.

So we see Peggy, apologetic and tentative back in 1960, now singularity confident and competent (but not without obstacles to bump her head up against). Joan, who won her partnership through a night with icky Herb from Jaguar, is now finding ways to show a value to the firm beyond keeping the books and keeping up her appearance. Ken Cosgrove, once an aspiring writer who vowed never to let himself become his day job, is now so cranked up with pressure he could blow an eyepatch. And Pete–no, I’m going to let you see Pete for yourself.

There are a lot of such stories Mad Men has set up, and “Time Zones” doesn’t try to touch on each of them in an hour. (The final season has 14 episodes to wrap up, seven this year and seven next.) But in each one that we do see, there’s a sense of urgency in the face of change, of characters figuring they have maybe one more chance to get themselves where they want to be.

For Don, right now, the challenge may be deciding where that is. In a quiet moment, he flicks on a TV and sees the beginning of an old movie, Lost Horizon. In the on-screen legend: “In these days of wars and rumors of wars–haven’t you ever dreamed of a place where there was peace and security, where living was not a struggle but a lasting delight?”

The answer, and not only for Don, is emphatically yes. The question, still uncertain, is whether you can get to that place by airplane. 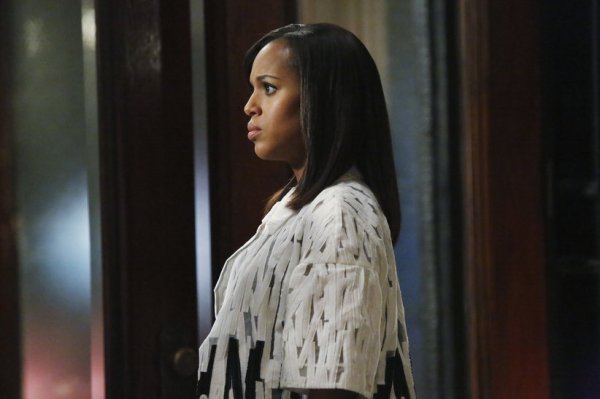 Scandal WATCH: In Which Relationships (And Buildings) May Blow Up
Next Up: Editor's Pick