The U.S. Border Patrol Has a Drug Dog Named Adolf—And Has No Plans to Change Its Name

The U.S. Customs and Border Patrol Agency has a drug dog named Adolf––and the agency has no plans to change its name.

A now-deleted tweet by the Customs and Border Patrol (CBP) Buffalo sector for International Dog Day on Monday named Adolf, along with other working dogs Delta, Doris and Pistol. A few people on Twitter immediately responded in shock that the dog shared a name with Nazi leader Adolf Hitler.

The revelation comes amid scrutiny of immigration enforcement officials’ behavior on social media. CBP launched an investigation in July after ProPublica reported on a secret Facebook group made up of 9,500 immigration officials who shared derogatory content about immigrants and Latino members of Congress.

CBP Buffalo spokesperson Michael Niezgoda confirms that the dog’s name is Adolf. The Shepherd dog was purchased from the Netherlands by the CBP Canine Center in El Paso, Texas in July 2013 and has become one of the top dogs in the sector for his drug seizures, Niezgoda tells TIME.

“However people think, that’s their own thoughts, but Adolf is a common name,” Niezgoda says.

Adolf was not among the more than 500 most popular names in the Netherlands in the last three years. In the U.S., it was not in the top 1,000 most popular baby names any year since 1900.

CBP credits Adolf with seizing more than 230 pounds of narcotics valued at more than $1.3 million including a currency seizure of more than $340,000 during his career with Border Patrol.

This screenshot taken by Kayla Nelson shows a now-deleted tweet by Customs and Border Protection praising Adolf, one of CBP's top drug dogs in the Buffalo region.
Courtesy Kayla Nelson

Niezgoda says he deleted the tweet because the CBP’s canine unit had not been notified yet that images of their dogs would be shared on social media, and “with some sensitivity of what’s going on along the southern border, we pulled the tweet.” Niezgoda says the tweet was not re-posted because it wasn’t until the end of the day that the dog’s handlers approved of the photos being shared.

Adolf was trained in the Netherlands and has assisted CBP in drug seizures in Buffalo since he was purchased in 2013. Niezgoda says because the dog’s name is officially registered as Adolf, changing his name would present a legal challenge.

“We don’t change the names because they have a training history,” he says. “And furthermore, the dog, Adolf…he’s a top dog for the northern border of New York and has received three top dog awards for his seizures.”

Kayla Nelson, spotted the tweet on Monday morning while drinking her coffee, and tells TIME she was shocked when she saw the dog’s name. Nelson immediately took a screenshot of the tweet and then attempted to reply to the post, but then discovered the tweet had already been deleted.

“At first I thought, ‘oh, dogs,’ but then I was like, ‘one of them is named Adolf? You have got to be kidding me,” she says. She went on to share her screenshot on her own Twitter account.

She says learning the dog was named in the Netherlands changes her opinion, but only slightly. She believes CBP should still change the dog’s name.

“The name Adolf evokes only one person, and we all know who that person is,” Nelson says. “CBP should know. I get that it’s a more common name in Europe, but that dog isn’t in Europe anymore.” 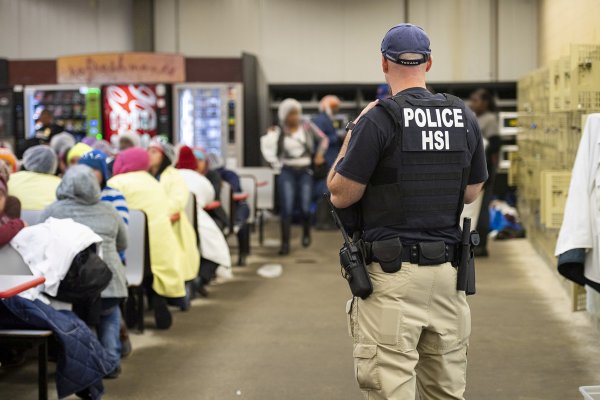 Children Left Alone For 8 Days After Mississippi ICE Raids
Next Up: Editor's Pick