(Bloomberg) — Johnson & Johnson shares rose as much as 5.4% after an Oklahoma judge ordered the company to pay far less than some investors expected in the first trial by a state seeking compensation for the public-health crisis spawned by opioid painkillers.

Judge Thad Balkman ruled Monday that J&J created a “temporary” public nuisance by duping doctors into overprescribing its opioid-based medications, and ordered the company to pay $572 million to the state. Oklahoma had sought as much as $17.5 billion in reimbursements for tax dollars spent dealing with an epidemic of addiction and overdoses. J&J said it would appeal the ruling.

Balkman’s decision may be an important benchmark for pharmaceutical executives facing thousands of similar lawsuits across the U.S. from cities, counties and states. While several companies have reached settlements in a few cases, some analysts have predicted opioid makers and distributors may have to pay a total of $100 billion to resolve their liability for the crisis.

Because some expected J&J to face as much as $2 billion in damages in the Oklahoma case, “the market will extrapolate this as a positive to the other opioid-related stocks,” Wells Fargo analyst David Maris wrote in a note to investors.

J&J and others, including Teva and McKesson Corp., face their next courtroom test two months from now when the first federal cases targeting their marketing of opioid painkillers are set for trial in Cleveland.

Judge Balkman heard the case without a jury during almost eight weeks of trial testimony that ended in mid-July.

“It’s a loss for J&J in that it validates the trial theory that pharma companies can be held liable for creating a public nuisance with their drug marketing,” said Elizabeth Burch, a University of Georgia law professor who teaches about mass torts. But it’s also a partial win “because the judge didn’t order them to pay $17 billion,” she said.

Officials of J&J and its Janssen unit, which was also a defendant in the Oklahoma case, said they have “strong grounds” for an appeal of Balkman’s ruling.

“Janssen did not cause the opioid crisis in Oklahoma, and neither the facts nor the law support this outcome,” Michael Ullmann, J&J’s general counsel, said in an emailed statement. Janssen made and marketed the company’s opioid-based painkillers.

Oklahoma Attorney General Mike Hunter accused J&J and other opioid makers of overstating the painkillers’ benefits and understating their risks in relentless marketing campaigns that duped doctors into prescribing the drugs for ailments not approved by regulators.

Hunter claimed J&J was a “kingpin” of the crisis because it once owned companies that grew poppies used to make the painkillers. J&J sold its Tasmania-based unit that processed opium in 2016.

Hunter told Balkman in court J&J has accepted “zero responsibility” for its central role in fueling the public-health crisis tied to opioids. He said the company — rather than Oklahoma taxpayers — should pick up the tab for the epidemic.

J&J argued it was being blamed for the bad acts of others, including Purdue Pharma LP and Teva. New Brunswick, New Jersey-based J&J says the state was overreaching in asking for $17.5 billion in reimbursement. While originally named as defendants in the case, Purdue agreed to a $270 million settlement before the trial began in May and Teva agreed to pay $85 million to resolve the state’s allegations.

“While Teva respectfully disagrees with the court’s decision, the ruling supports Teva’s rationale for a settlement before trial, and it remains a decision that was in the best interest of the Company,” Kelley Dougherty, a U.S.-based spokeswoman for Teva, said in an emailed statement.

J&J’s lawyers derided Oklahoma’s claims that the company flooded the state with sales reps eager to use flawed studies to tout the effectiveness of their opioid-based pain patches and pills.

“The state would have you believe we marshaled an army to come here to mislead doctors about risks and benefits of opioids,” J&J attorney Larry Ottaway said. “Not true.”

Opioids were involved in 400,000 overdose deaths from 1999 to 2017, according to the U.S. Centers for Disease Control and Prevention. During that same period, more than 4,000 Oklahomans died from opioid abuse and thousands were left hooked on pills, according to the state. 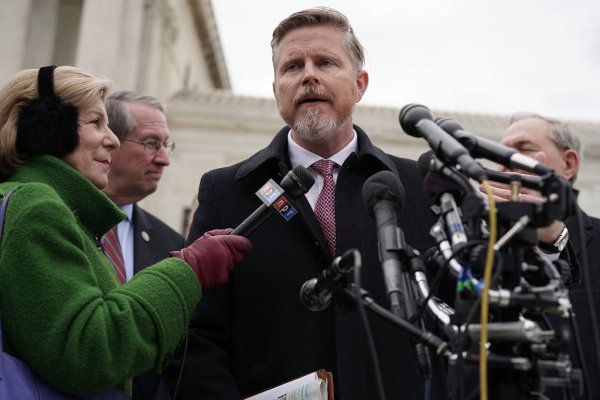 Interim Overstock CEO Talks to TIME About Scandal
Next Up: Editor's Pick