Sports movies, at least the ones not based on true stories, aren’t exactly known for prioritizing believability — but Draft Day, the football flick out April 11, tackles that trend.

“What I don’t like when I see sports movies is that they usually turn out to be puff pieces. It’s all about how great the sport is. Baseball movies are kind of ridiculous because they turn into the magic of the ball and the magic of having a bat and the magic of walking into a park. Come on, already. It’s not that magical,” says actor and former NFL-er Terry Crews, who plays the dad of a potential draftee. (Crews spoke to TIME in March about The Single Lady’s Club; his thoughts on football didn’t make it to the published version of that Q&A.)

“What’s so cool about Draft Day,” Crews says, “is it showed the warts, all the little problems, the fact that people are treated like commodities, and actually showing that relationships are very hard to keep in the NFL.”

Emotional accuracy isn’t the movie’s only touchdown in the truth department — and that’s because the NFL was deeply involved in making sure that every football-related plot point was 100% feasible. Tracy Perlman, the NFL’s vice president for marketing and entertainment, describes as Draft Day‘s relationship with the NFL as the deepest, most detailed partnership of its kind in NFL history.

This isn’t the first time the NFL has worked with movie producers — there was what Perlman describes as a “trademark deal” for the film Invincible, and The Blind Side used licensed footage, for example — and Perlman herself is no stranger to high-profile marketing ideas, but Draft Day goes beyond that. For one thing, the movie was actually shot at the 2013 draft, as the real thing was going on around it: the scenes that take place backstage were shot during the draft, and the ones of the draft itself were shot during off-hours. Real football players and NFL analysts appear in those scenes; Roger Goodell, the NFL’s Commissioner, also appears at length as himself. For the scenes at football stadiums around the country, the real arenas — and in some cases real players and staffers — also stood in for their fictional selves. Perhaps more importantly, the NFL’s football operations team went through the script and made sure that its portrayal of the mechanisms of the draft would be spot-on.

“We’re really careful about how our brand is portrayed,” she says. “This, to me, was really about the chess match that is the draft and how smart these people have to be to build a team. It’s really understanding that this is much deeper than a guy standing at a podium calling out names. It elevates the draft itself.”

At the same time, being careful about the brand didn’t mean just making sure the facts checked out. Perlman says the league had approval rights and that she saw every daily during filming — partially to make sure that NFL-sponsored products were in the shots. So, in its own way, Draft Day is both one giant ad for the NFL and something akin to a documentary getting photobombed by Hollywood. The “warts” that Crews was so happy to see in the script are limited to the characters’ personal lives, not the depiction of the league.

Unlike the world of journalism, where fact-checking doesn’t involve letting the story subject vet the finished product, movie-making’s business side requires a trade-off: let us use your name and your facilities and your footage and your people, and we’ll let you determine how. And, because that bundle of NFL-branded elements is the subject of pretty much every scene in Draft Day, that trade-off is a big one. But if you’re willing to make that trade, as Draft Day shows, you may well end up with the most accurate fictional sports movie ever. 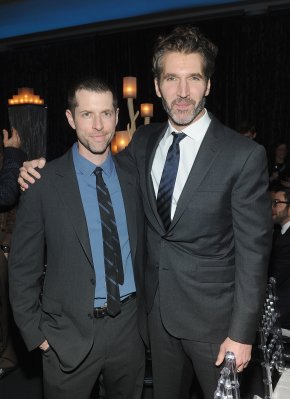 Game of Thrones Showrunners Are Making Their First Movie Together
Next Up: Editor's Pick