What I've Learned From Teaching the 'Snowflake Generation' About Trauma

Opened book on the desk
Witthaya Prasongsin—Getty Images
Ideas
By Kate McQuade
Kate McQuade teaches at Phillips Academy in Andover, Massachusetts, and is the author of the short-story collection Tell Me Who We Were.

Every September, as summer ends and the first day of school approaches, I spend a lot of time thinking about darkness.

Perhaps other teachers would say the same, jokingly. But I teach a high school course on trauma literature, and my students belong to a generation described as the most coddled, stressed and easily traumatized in history. So the question of darkness—of how much trauma to expose my students to, and why I’m doing it—is often, very sincerely, on my mind.

Until recently, my students were “millennials”; now, “Generation Z.” Whatever you call them, they’re a cohort stereotyped as too fragile for difficult literature, too desirous of trigger warnings to survive being challenged, too self-involved to think beyond their own insular bubbles and face the hard truths of the real world. In 2016, Collins Dictionary included “snowflake generation” among its Words of the Year, defining young adults of the 2010s as a group “less resilient and more prone to taking offence than previous generations.” (The dictionary also clarified, perhaps unnecessarily, that the noun is considered “informal, derogatory.”)

But after twelve years of teaching this course, which covers some of the most emotionally difficult texts in contemporary literature—narratives of war, genocide, slavery and their still-present aftermaths—I’m pretty sure the popular characterization of my young students is wrong.

In particular, I don’t buy the narrative that this generation lacks the resilience necessary for difficult literature, nor that trigger warnings facilitate their rejection of it. For years, I’ve watched my students circle tirelessly around questions so difficult their answers regularly elude us. Is Toni Morrison’s Beloved a ghost, or is Beloved actually a real-life survivor of the Middle Passage, and what does it mean that we can’t decide between hauntedness and history? Why do so many novels about the Vietnam War have an unsolvable mystery at their center? “How could a hole make him feel more full?” wonders a character (a gunshot victim) in Tommy Orange’s There There, and the paradox asks us to consider the many holes—historical, personal, representational—that define not only the lives of Orange’s Native American characters, but also our country’s origin story.

Gaps, mysteries and missing answers are endemic in trauma literature. Absence is often made manifest because absence is representative not only of trauma (an experience that regularly precludes its own registration) but also of the American historical record that these books aim to reexamine. In the novels I teach, “truth” is almost always given the air quotes it deserves.

I believe a comfort with unanswerable questions is one reason my Gen Z students are especially good at grappling with this literature. Perhaps more than any generation before them, they recognize within it glimpses of the adult world they are about to enter—not necessarily a traumatic world, but certainly a world where history is perforated, where facts are under attack. Earlier this summer, the Pew Research Center released a study noting that Americans see “made-up news” as one of the most urgent problems threatening America today—more threatening than climate change, racism, sexism and terrorism. That statistic surprised me, but I doubt it would surprise my students, who seem to understand the existential threat of a truthless world from a very young age. “In any war story,” writes Tim O’Brien in The Things They Carried, “but especially a true one, it’s difficult to separate what happened from what seemed to happen.” I remember one student pointing to that quote during class discussion. “That’s the danger of fake news,” he said, and the rest all nodded soberly—recognizing, I suppose, that the adulthood they’re about to be drafted into is one at war with truth itself.

My students connect with this literature because they recognize their world within it, a world of multiple, often unbridgeable realities. We grown-ups, with our separate news stations and our ideological echo chambers and our stiflingly atomized communities, have made it that way. Their desire for trigger warnings isn’t, I think, an incurious attempt to hide from that world, but rather to change its infrastructure in a way that will allow them to navigate it—to seek its deeper truths with the aid of warning signs and safety rails that any explorer moving through increasingly uncertain terrain would appreciate.

This is why every September, I assign my students the most difficult books I can find. I don’t do this to traumatize them, nor to take a stand against trigger warnings (which I give my students regularly). And I’m certainly not trying to expose my students to a literature that will “toughen them up” for the world beyond our school’s walls. Literature is neither contagion of nor inoculation against trauma. Literature is practice. And I want my students, through these difficult books, to practice living. I want them to practice recognizing historical gaps—the oppressed silence of untold stories—and to bridge them. I want them to practice having clear and easy answers taken away so they don’t grow up to be like the rest of us, content in our echo chambers of clear and easy answers.

“But this too is true: stories can save us,” writes Tim O’Brien in The Things They Carried. I hang on tight to that idea, year after year, on the first day of school. Not because these stories will save my students. But because I’m hoping my students will grow up and save the rest of us. 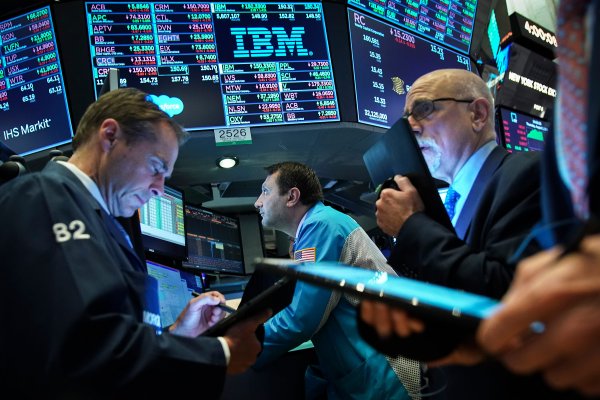 Yes, the Market Has Been Volatile. No, a Recession Is Not Imminent
Next Up: Editor's Pick