Divers Visited the Titanic's Wreck for the First Time in Over a Decade. Here's Why They Were Shocked by the Ship's Condition

New footage detailing the condition of the Titanic has scientists speculating that the shipwreck will have disintegrated entirely within the next 30 years.

An expedition team led by Caladan Oceanic CEO and deep-sea explorer Victor Vescovo recently dove to the wreck in the five times over the course of eight days, sourcing the most up-to-date images of the famous sunken liner. Vescovo also recently broke the world record for deep-diving with a recent descent 35,853 feet into the Mariana Trench in the Pacific Ocean, the deepest natural trench in the world

The wreck of the Titanic has lain at the bottom of the Atlantic Ocean off the coast of the Canadian province of Newfoundland since April 1912, when it hit an iceberg and sank on its maiden voyage from Southampton, England, to New York City. Of the 2,207 passengers and crew on board, more than 1,500 died.

Atlantic Productions London, the team behind an upcoming documentary that is set to air the explorers’ findings, captured footage of a particularly affected area located on the starboard side of the ship. “The team of experts and scientists examined the remains of the ship, capturing for the first time extraordinary native 4K footage using specially adapted cameras,” a statement from Atlantic Productions read. “Using the submersible camera systems, the team performed dedicated photogrammetry passes on the wreck, allowing highly accurate and photoreal 3D models of RMS Titanic to be produced.”

A bathtub, part of one of ship's cabins, photographed on the Atlantic Ocean seabed in 1996.
Xavier DESMIER—Gamma-Rapho via Getty Images

In recent years, a mapping project has been undertaken to track and memorialize Titanic’s resting place; in 2012, the wreck became a UNESCO cultural heritage site. And with the ship’s continued deterioration to consider, the urgency of such projects is increasing. The “captain’s bathtub,” a well-known part of the wreck (pictured above) has now disappeared completely due to disintegration, Titanic historian Parks Stephenson noted in Atlantic Productions’ statement.

The ship, which fell to the seabed in two parts, can now be found 370 miles off the coast of Newfoundland at a depth of roughly 12,600 feet. Fields of debris surround each part of the wreck, including some of the ship’s bunkers, passengers’ luggage, wine bottles and even the intact face of a child’s porcelain doll. The team’s August expedition is the first time in 14 years that the wreckage site has been visited by a human-occupied vehicle.

Henrietta Mann, a researcher at Dalhousie University in Halifax, Nova Scotia, has studied the Titanic’s wreck for years. In 2010 she co-discovered a new species of bacteria — Halomonas titanicae — found in rusticle samples taken from the wreck. Halomonas titanicae is among the bacteria found on the wreck, which eat away at the ship’s iron, breaking it down. This process results in rusticles, fragile rust formations which resemble icicles. Rusticles can be seen all over the wreck, in a constant state of disintegration and regrowth.

Mann tells TIME that she has seen the explorers’ footage and cites a number of key factors — corrosion, oceanic eddies and undercurrents, and the impact of the iron-eating bacteria — as contributing to the shipwreck’s current state (as well as its future prospects). She also cites the weight of the wreck as a supplementary factor in its deterioration. In essence, it is working against itself. “If one level deteriorates at the top [of the wreck], it drops to the next one,” she explains, “which means it … impacts on the lower levels. Damage is done layer after layer.”

Mann says it’s impossible to know exactly how long it will take for the ship to completely fall apart, but the observed damage can offer clues. Her best estimation is that there remain approximately 30 years until the wreck has disintegrated entirely. Even then, its condition is likely to grow increasingly worse over time, she says. “Logic tells you [that] more structurally it is damaged, the more quickly it will deteriorate.”

Read more: See Photos of the Wreck of the Titanic When It Was First Discovered

Triton Submarines president Patrick Lahey piloted three of the team’s five dives. He said that the shipwreck is returning to its “elemental form.”

“The most fascinating aspect was seeing how the Titanic is being consumed by the ocean while providing refuge for a remarkably diverse number of animals,” he said in a statement.

Expedition team leader Vescovo tells TIME that the shipwreck was actually in better condition than he expected. “I had read some projections by some scientists that major portions might have utterly collapsed since the last photo survey in 2010, but, at least at the bow, they haven’t,” he says. “There was less of a ‘collapse’ than just a slow, steady, degradation of the exterior areas. The fact that there are still many glass portholes intact amazed me, and really impressed me just how durable this ship is.”

“Biology and current are slowly eroding the wreck as one would expect it to,” he continues. “But we should remember that the wreck has been down there 107 years in strong currents and seawater, so it is a matter of not if, but when, the sea will reclaim it in its entirety.” 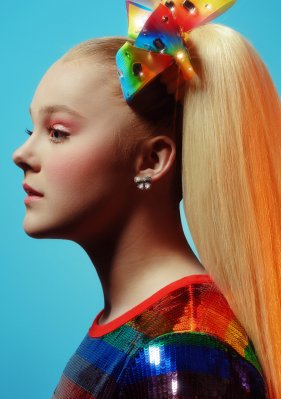 'What Do People Want Me to Do? Wear Black Every Day?': How Child Star JoJo Siwa Built Her Sparkly Empire
Next Up: Editor's Pick