Yes, the Market Has Been Volatile. No, a Recession Is Not Imminent

Traders and financial professionals work ahead of the closing bell on the floor of the New York Stock Exchange on Aug. 1, 2019 in New York City. Following large gains earlier in the day, U.S. markets dropped sharply after an afternoon tweet by U.S. President Donald Trump announcing his plans to impose a 10 percent tariff on an additional $300 billion worth of Chinese imports.
Drew Angerer—Getty Images
Ideas
By Douglas Holtz-Eakin
Holtz-Eakin, a former director of the Congressional Budget Office and adviser to John McCain, is president of the American Action Forum

Recent economic commentary has tended to focus on White House tactics and market volatility, but it is useful to assess both the good and the bad of the President’s economic stewardship.

There has been a meaningful improvement in the pace of economic growth, propelled mostly by business investment that had seemed dead in the water–and there is no doubt Trump’s policies deserve credit. His U-turn on regulation offered a dramatic reduction in operating costs for businesses, and the Tax Cuts and Jobs Act not only lowered taxes but featured reforms to business taxation that improved the incentives to invest domestically and keep headquarters in the U.S.

Yet the report card is hardly one of straight A’s. The President’s trade policies are the major obstacle to growth and leave him with a mixed record. The aluminum and steel tariffs hurt consumers of metals far more than they helped U.S. producers. The negotiations to transform the North American Free Trade Agreement into the United States–Mexico–Canada Agreement were costly and achieved little–if the deal even gets ratified. The periodic threats of tariffs on Mexico or on imported autos or other goods and trading partners are part of an environment that has suppressed trade and diminished global growth, with negative effects on the U.S. economy. And while Trump correctly identified China as the culprit, his punitive-tariffs approach amounted to a $100 billion (annualized) tax hike on Americans.

It’s true that the economy has grown more slowly lately, but the obsession with an imminent downturn stems from too much focus on the daily ups and downs of the market. The household sector remains nearly three-quarters of the U.S. economy and displays a healthy mix of low unemployment and rising wages. As long as that continues, we will avoid a recession.

Holtz-Eakin, a former director of the Congressional Budget Office and adviser to John McCain, is president of the American Action Forum 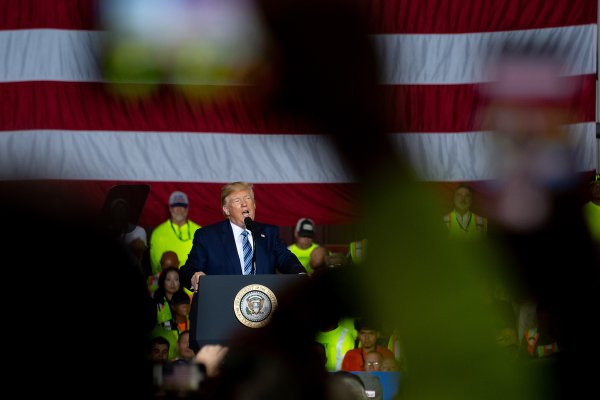 The Economy Under Trump Is Very Good. But Don’t Get Too Comfortable
Next Up: Editor's Pick