(Bloomberg) –– The U.S. budget deficit is growing faster than expected and President Donald Trump’s trade war is weighing on the economy, according to a new Congressional Budget Office forecast that highlights key challenges ahead of the 2020 elections.

The shortfall is set to widen to $1 trillion by fiscal year 2020, two years earlier than previously estimated, according to the non-partisan group’s annual budget outlook released Wednesday in Washington. That’s up from an estimated $960 billion in the 12 months that ends Sept. 30. The CBO said in January saw a gap of $890 billion next year and didn’t see it topping $1 trillion until 2022.

Widening the nation’s fiscal gap is legislation that raised spending levels, though the effect will be somewhat moderated by the expectation of lower interest rates, which reduces the government’s debt-service burden. Trump has badgered the Federal Reserve to cut its policy rate and market rates are low, too.

It would be the first time the deficit exceeded the $1 trillion mark since 2012, as the economy recovered from the financial crisis and could give Democrats potential ammunition as Trump runs for re-election. Fiscal hawks say the rising wave of red ink also limits the federal government’s ability to provide stimulus in the event of a downturn.

He may have a point when the projected deficits are measured as a share of the economy. According to the CBO’s numbers, the deficit will be 4.6% of gross domestic product and stay under 5% of GDP through 2026. That’s about half the level it reached during the financial crisis a decade ago.

The bigger problem is government debt, which is forecast to rise as a share of the economy over the next decade, from 81% this year to 95% by 2029.

Economists are increasingly warning that a recession may be on the horizon, with a key segment of the yield curve briefly inverting last week in what’s historically presaged a recession. The odds of a U.S. downturn in the next 12 months rose to 35% in Bloomberg’s August survey of economists, from 31% forecast previously.

“The nation’s fiscal outlook is challenging,” CBO Director Phillip Swagel said in a statement. “Federal debt, which is already high by historical standards, is on an unsustainable course, projected to rise even higher after 2029 because of the aging of the population, growth in per capita spending on health care, and rising interest costs.”

To help counter any slowdown, Fed officials cut interest rates on July 31, marking the first reduction since the financial crisis 10 years ago, and signaled more easing may be coming.

The growing U.S. debt load could add to strains on the economy, now in its longest expansion on record. It’s a troubling factor amid Trump’s ongoing trade war with China that’s delaying some investment and slowing global growth.

The CBO singled out tariffs as weighing on the economy. As a result of levies imposed by the U.S. and others since last year, the CBO said U.S. GDP will be 0.3% lower by 2020 than it would have been otherwise and real average household income will be reduced by $580.

The U.S. last ran a budget deficit bigger than $1 trillion between 2009 and 2012, when former President Barack Obama ran a large bailout for the financial markets and a stimulus plan to yank the country out of the financial crisis.

The deficit has expanded under Trump, amid the Republican‘s $1.5 trillion tax cut package, increased federal spending and an aging population that’s boosting the cost of social programs like Medicare.

In a move that would further add to the debt load, Trump said recently “a lot of people” would like a cut in payroll taxes and he’s floated the idea of a capital gains tax break, as his administration examines ways to juice the economy. 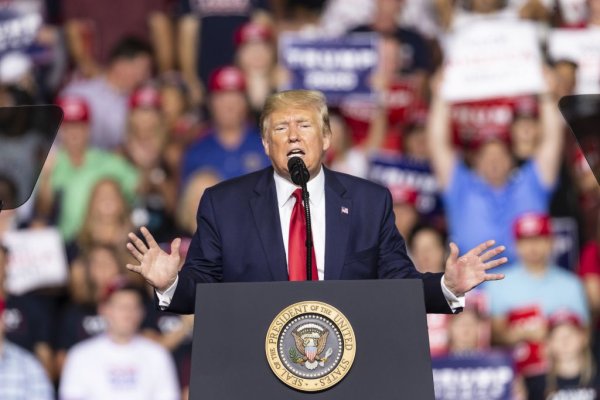 Independents Are Losing Confidence in the Economy. That's Bad News for President Trump
Next Up: Editor's Pick