It Takes Black Women in the U.S. 20 Months to Earn What White Men Make in a Year. Here's the History Behind That Wage Gap

More than four months after Equal Pay Day, black women are only now catching up.

Back in early April, American women could mark the day on which, based on median salaries, they had earned as much in 2018 and 2019 combined as men had earned the prior year alone—but not every American woman had cause to celebrate. While white and Asian women evened out in the spring, Thursday marks Equal Pay Day for black women, who have had to work all those extra weeks for their pay to match that for white, non-Hispanic men. (And Native American and Latina women won’t celebrate their Equal Pay Days until Sept. 23 and Nov. 20, respectively). Nationally, black women earn 61 cents for every dollar earned by white men, and in parts of the country that disparity is even starker. Black women in Louisiana are paid just 48 cents, and in Mississippi and New Jersey 55 cents, for every dollar paid to white, non-Hispanic men. These wage disparities take an extraordinary toll over the course of an individual’s life, and one 2017 study shows that over a 40-year career, women overall lose $418,800 as a result of the wage gap, with women of color losing almost $870,000.

This day—like the staggered equal pay days to follow—begs us to understand how such inequities came to be, and why they have been so difficult to move beyond.

In order to understand the present day race and gender wage gaps we must first look to slavery and the Jim Crow era that followed. The legacy of those two periods—periods characterized by the exploitation of black women’s physical and reproductive labor—distinctly shaped labor market opportunities and outcomes for women of color for decades. The rules of that time had a durability that long outlasted it. In 1930, 40% of black workers were employed in agriculture (vs. 26% of white men) and more than 60% of black women worked as domestic workers (vs. 20% of white women). Even as new labor-market opportunities became available to women, rules and guidelines were adapted to ensure the dynamic remained the same. For example, the practice of tipping—today a source of poverty among working women—emerged in resistance to black workers moving into formal employment and, as my colleague Rakeen Mabud has written, was “explicitly used to avoid paying black Americans for their labor in this period.”

The New Deal, which created pathways to the middle class for white workers, cemented these early race and gender inequities and erected new barriers for black Americans. The 1935 Social Security Act, the National Labor Relations Act and the Fair Labor Standards Act—among the slate of New Deal policies that transformed the labor market for so many white workers—all excluded domestic and agricultural workers from unemployment benefits and a wide variety of protections such as a 40-hour workweek and a national minimum wage. This was not an accident, but rather a deliberate choice to get Southern members of Congress to support the new laws.

In the decades following WWII, the growth of the service sector opened up new opportunities for black women. In many ways these jobs were an improvement on the insecure and exploitative work of domestic labor, but they were still low-paying and offered few, if any, protections.

The second half of the 20th century saw an ushering in of more inclusive rules that led to more equitable opportunities and outcomes. The passage of the Civil Rights Act in 1964—which removed many exclusionary rules and also put forth a set of statutes that explicitly promoted inclusion—began what would be a promising, albeit short, period of progress. The range of policies and programs promoted in the post-Civil Rights Act era focused on increasing human capital through education and greater skills development, and opened up two key paths to the middle class for black Americans: unionized manufacturing jobs and public-sector employment.

The major expansion of public-sector employment in the 1960s and ’70s—coupled with President Johnson’s Executive Order 11246, banning discrimination in the federal government and by federal contractors and requiring affirmative-action policies—and the growth of public-sector unions opened up new economic opportunities for black Americans. Those opportunities multiplied in the wake of additional affirmative action efforts between 1965 and 1980. The new rules of the Civil Rights era not only increased the full participation of black Americans in the economy, but also in American democracy, trends that were mutually reinforcing. As my colleagues and I argue in our book The Hidden Rules of Race, the increased representation of black Americans in elected office and in other public-sector positions had a positive effect on black employment outcomes and fueled a new and expanded black middle class.

Thanks in part to that history, women of color today represent the highest share of workers the public sector. As of 2016, nearly 18% of public-sector workers were black women, compared to 16.9% for white women, and 11.5% and 11% for black and white men, respectively. Jobs in the public sector have tended to be unionized, offering higher wages, more stability and more comprehensive benefits than the service-sector jobs that black women had long been channeled into.

But the progress of the Civil Rights era would be incomplete and short lived. Starting in the late 1970s—amid a backlash to the increased inclusion of people of color in American democracy and the economy—the wins of the Civil Rights era began to be walked back. In contrast to those of decades prior, the new rules purported to be race- and gender-blind, in keeping with a mentality that said racism and sexism were things of a distant past and that hard work was all one needed to succeed.

Forty years of stagnant wages later, many Americans have come to believe that the rules are stacked against them and that the up-by-your-bootstraps story is a myth.

The wage gap is problem that profoundly impacts individuals and families, but it isn’t caused by the people affected by it. It is driven by numerous intersecting systemic failures, many of which are steeped in the country’s history of racism and sexism. Even today, domestic workers—nannies, housekeepers and home health aides, who are disproportionately women of color—remain overwhelmingly unprotected thanks to exclusions that began with the New Deal (Democrats aim to change that with a newly-introduced Domestic Workers Bill of Rights).

The race and gender pay gap is not a bug in America’s economic system: it’s a feature. Making the labor market more equitable today and in the years to come will require understanding and accounting for our history, acknowledging how sexism and racism have been baked into our economy for centuries and continue to shape opportunities and outcomes for women and their families. But we need not avoid repeating all of our past. After all, history also tells us a different kind of rules—like those of the Civil Rights era—can move the needle toward equity and inclusion. Today reminds us just how overdue we are for more of them.

Andrea Flynn is a fellow at the Roosevelt Institute, where she researches and writes on race, gender, and economic inequality. She is a co-author of The Hidden Rules of Race. 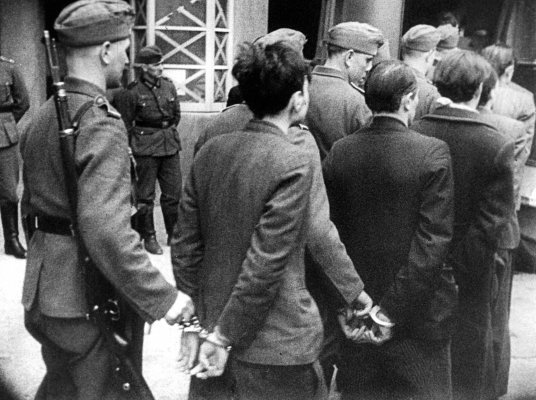 'I Have Only One More Test to Pass.' The Enduring Message of the Last Letters From WWII's Captured French Resisters
Next Up: Editor's Pick