Dale Earnhardt Jr. and His Family Survived a Plane Crash in Tennessee. Here's What to Know

Dale Earnhardt Jr. and his family survived a plane crash without any injuries in Elizabethton, Tennessee Thursday.

The small Cessena Citation private jet they were in crashed toward the end of a runway as it landed at the Elizabethton Municipal Airport and caught fire on Thursday afternoon, the Federal Aviation Administration said in a statement. Earnhardt, his wife, Amy Earnhardt, and daughter, Isla were able to escape the plane, as were the two pilots on board, according to a statement from NASCAR. The FAA confirmed that two pilots and three passengers were aboard the plane. They were taken to a local hospital; Earnhardt was discharged later on Thursday.

What happened in the plane crash?

Video footage of the crash posted on Facebook shows people walking away from the plane as thick clouds of smoke billow from the wreckage. Sirens are heard as authorities arrived.

The FAA said the plane that crashed was registered under the number N8JR. The owner listed on the FAA’s website for the aircraft is JRM Air, based in Mooresville, North Carolina. The Nashville Tennessean reports that Earnhardt’s race team, JR Motorsports, is also based in Mooresville, where the NASCAR legend is from.

Elizabethton fire chief Barry Carrier told NBC all five people aboard had gotten off the plane by the time the deputy fire chief arrived. The response time took about two to three minutes, Carrier said. “It looks like they were able to get out fairly quickly and under their own power,” he said.

Firefighters worked to extinguish the flames from the crash, Carrier said. He added that the crash caused a large fuel spill and that officials are working to prevent it from running into any nearby water.

Speaking with CNN, Carrier said the plane crashed through a fence. “If the fence had blocked the exit that could have been really bad,” Carrier told reporters at a press conference. “They were very lucky.”

The FAA said the National Transportation Safety Board will investigate the crash.

Earnhardt and his family were likely on their way to Bristol Motor Speedway, where NASCAR races are set to take place this weekend. Earnhardt, who is an analyst for NBC Sports, will not be covering the weekend’s events, a network spokesperson said.

Earnhardt retired from racing in 2017.

“We’re incredibly grateful that Dale, his wife, Amy, daughter, Isla, and the two pilots are safe following today’s accident. After being discharged from the hospital, we communicated with Dale and his team, and we’re all in agreement that he should take this weekend off to be with his family,” said a statement from NBC Sports. “We look forward to having him back in the booth (September 1) at Darlington.” 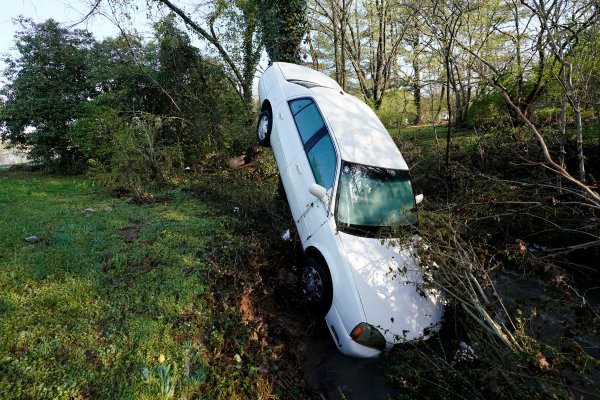