Former Texas Rep. Beto O’Rourke returned to the campaign trail on Thursday morning with a major address from his hometown of El Paso for the first time since the shooting that left at least 22 dead and dozens of victims injured earlier this month.

His return to campaigning comes amid calls for him to drop out of the presidential race and run for Texas Sen. John Cornyn’s seat — including from the Houston Chronicle’s editorial board — and as he sits in the low single digits in most polls. It also comes in the midst of reports that former Colorado Gov. John Hickenlooper is expected to put an end to his struggling presidential campaign to run for Senate.

In his speech, O’Rourke rejected those calls, however.

“We must take the fight directly to the source of this problem, that person who has caused this pain and placed this country in this moment of peril, and that is Donald Trump.”

O’Rourke will spend Friday in Mississippi, where last week the largest single-state enforcement operation by Immigration and Customs Enforcement raids occurred. On Saturday, he will be in Arkansas to headline the state Democratic Party’s Clinton Dinner.

It was clear that the shooting was an inflection point for O’Rourke, and in his speech it became clearer how. O’Rourke outlined the future of his campaign and suggested he will spend more time bringing attention to issues and telling other people’s stories and confronting President Donald Trump.

“To those places where Donald Trump has been terrorizing and terrifying and demeaning our fellow Americans, that’s where you will find me and this campaign,” O’Rourke said, pointing to the Iowa State Fair as the type of typical early-state event he would spend less time at. (He intentionally skipped the fair to stay in El Paso after the shooting.) “Anyone that this president puts down, we’re going to do our best to lift up.”

Since the shooting, O’Rourke has gone out of his way to focus on the victims and their families. He did that again Thursday morning. His speech, according to his campaign, was done without prepared remarks. At one point O’Rourke talked about Antonio Basco, the man who gained national attention this week when he invited the public to his wife’s funeral. Margie Reckard died in the shooting, and she was Basco’s only family. So many people are now expected at her funeral that it has reportedly been moved to a larger venue. O’Rourke met Basco last week at the memorial near the Walmart where the shooting took place.

O’Rourke was born and grew up in El Paso, where he later served on the city council and represented the area in Congress. He did not seek reelection for his seat in the 2018 midterms, when he chose instead to run against Texas Sen. Ted Cruz. Though he narrowly lost the race, it put him on the national stage and gave him buzz for a presidential run. 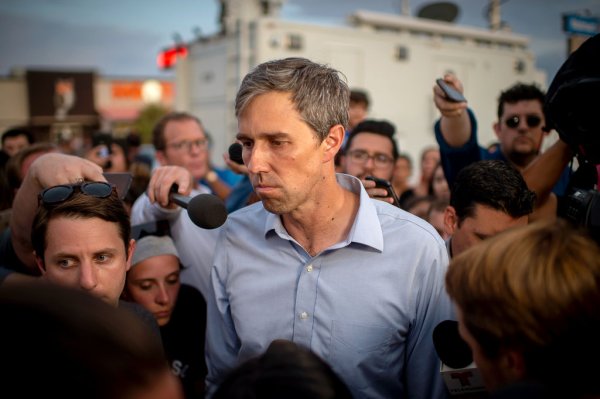 Beto Finds His Voice in Helping El Paso Grieve
Next Up: Editor's Pick