What happens to us when we die? In the world of Gravity Ghosts, an indie platformer from developer Ivy Games, spirits ascend to a celestial realm where they collect stars, help animals, and uncover the mysteries of their life and death. That’s Iona’s path, anyway, the game’s 12-year-old recently deceased protagonist.

Gravity Ghost is a brief but beautiful and moving video game that first came out in 2015. You might have missed it, but that’s OK — it’s just been re-released as a Deluxe Edition on the PlayStation 4 with new music and additional levels for $10. It’s a short game, perfect for an afternoon, and a must-play for anyone interested in seeing a stellar example of a video game that’s as affecting as a painting or novel. If video games are art — and they are — then Gravity Ghost is high art.

In Gravity Ghost, players control Iona, a deceased little girl who’s navigating the afterlife looking for the spirit of her fox friend. She lived on an island with her family, who kept the local lighthouse. But tragedy struck several times over. Part of the fun of Gravity Ghost is uncovering Iona’s story, and that of her family.

To do that, Iona navigates a series of planets by jumping from orbit to orbit. The larger the planet, the greater its gravitational pull. To break free of these mighty bodies, Iona uses their gravity to launch herself slingshot-style, like an interstellar probe.

Each level is brief. Iona needs to collect a star to open a door to proceed. As she collect stars, they fill up the sky of her afterlife with animal constellations. There’s a total of seven animal constellations and about 100 stars. At the end of each constellation, Iona confronts the associated animal spirit and gets some advice and a small view on the mortal world she left behind.

As Iona explores the cosmos, she collects power-ups that let her manipulate her mass (and thus gravity’s effects on her spirit) and elements that let her terraform planets. With fire, Iona can transform a planet into a ball of flame and use the updraft to reach far away portions of a level. A flowing river of ghostly hair trails Iona, growing as she gains power. She uses the hair to power her terraforming and trap the spirits of animals who, once returned to their bodies, give her glimpses of her life and tell the story of her death.

The music is a gorgeous Phillip Glass-style piano accompaniment that sets the tone perfectly. Iona’s voice actor, Ashely Burch, hits just the right notes, too. She’s excited at the prospect of soaring through the stars, sad that she’s dead and yearning to help her family, and silly when dealing with some of the stranger guardian spirits.

Gravity Ghost blew audiences away in 2015, and the Deluxe Edition is perfect for anyone who missed its first release. In addition to the new music, Gravity Ghost: Deluxe Edition also comes with a new constellation of 13 challenge levels, so Iona can keep exploring the stars once she’s resolved her unfinished business back on earth. 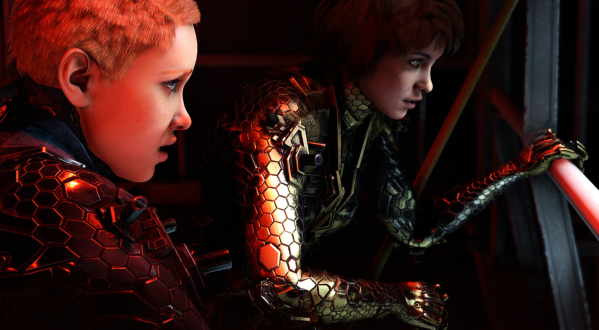 Wolfenstein: Youngblood Review: Grab a Pal and Fight Some Nazis
Next Up: Editor's Pick