Police in Houston are looking for the attacker and his accomplice, Assistant Police Chief Bobby Dobbins told reporters Thursday night.

Daniel Gotera, a sports reporter at KHOU-TV was on the freeway during the attack. He described the event on Twitter as an “unreal scene.” According to Gotera, the man got “out of his car with gun just shooting in the middle of freeway.”

CNN reports that the altercation began when two eastbound cars crashed just before 6 p.m. The suspects hit the victims’ car, causing it to spin out. According to Fox 26 in Houston, police said the alleged attackers intentionally struck the other vehicle.

The suspect in the first car then got out and began to follow the hit car as it rolled down a hill. According to Dobbins, when the second car came to a stop one of the men fired multiple times through the windshield, killing both the passenger and the driver.

Dobbins said that the shooter then turned toward a nearby witness, who took out his own gun and fired at the shooter in self defense. The shooter and his accomplice then fled to his car and escaped the scene. It is not clear if he was hit by the armed bystander.

According to CNN, when questioned about potential motives, Dobbins said, “Road rage? An accident? Narcotics? We just don’t know yet so I won’t speculate.” Dobbins said narcotics were found in the victims’ car.

Dobbins said that there were multiple witnesses that the police were interviewing. He also urged anyone with information to come forward. 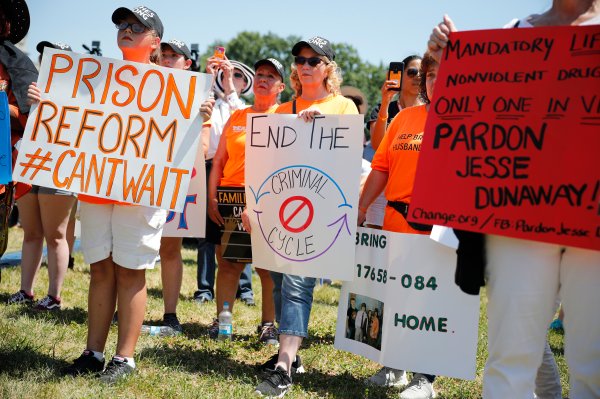 Fewer People Are in Prison in the U.S. — and Crime Rates Are Going Down Too, Study Shows
Next Up: Editor's Pick