Arrow Has Given DC Comics the Best On-Screen Superhero Franchise

Stephen Amell as The Arrow in "The Man Under the Hood" episode.
Diyah Pera—The CW
By Eric Dodds

Captain America: The Winter Soldier has received plenty of praise since its release last Friday, not only for its quality but also for the fact that it reinforces and enhances the superhero universe that Marvel has spent the last six years (not to mention the next 14) trying to build. But following the conclusion of Christopher Nolan’s Dark Knight trilogy, the state of the DC Comics superhero universe is not as prosperous, nor its future as well-assured. Green Lantern was a complete flop. Man of Steel received middling reviews and failed to outperform any of the Iron Man films or The Avengers at the box office. The sequel to Man of Steel is scheduled to be released in 2016 and will add a new Batman to its universe, but has already received a wave of criticism because that Batman will be played by Ben Affleck. Point being, the outlook for DC Comics’ big-screen future isn’t particularly sunny.

The good news for DC is that it is has the best, most fully-realized superhero franchise out there — it’s just not on the big screen.

When Arrow debuted on the CW in the fall of 2012, it did so to little fanfare. Based on DC’s Green Arrow series, Arrow tells the story of billionaire businessman Oliver Queen (Stephen Amell) who, after being shipwrecked on a deserted island for five years, returns home to Starling City and vows to “save” his city by eradicating the pervasive criminal element. As far as superhero origin stories go, Arrow‘s doesn’t exactly reinvent the wheel — especially given his similarity to another masked, crime-fighting businessman billionaire in the DC family. And if Arrow had been a movie, it likely would have made no greater impact than other movies based on lesser superheroes (i.e. The Punisher) did.

Fortunately, Arrow was not a movie. Countless critics have noted that television is no longer film’s little brother — not an inferior storytelling medium. Instead, television has increasingly become the mode used to tell more artfully realized stories, and Arrow demonstrates that nowhere else the opportunity to create a universe like the ones that Marvel and DC want be found. The obvious drawbacks — smaller budgets, fewer explosions, less CGI, more obscure actors — are easily outweighed by the ability to tell a more complete story, to develop characters beyond their abilities and readily apparent flaws.

Part of the reason that superhero origin stories have been critiqued as cookie-cutter and derivative in recent years is that — with few exceptions — they all cram the same basic story into the span of an hour or two, with little room for deviation or innovation. Arrow has shown itself capable of telling that origin story in a manner that, if not entirely original, is better implemented when flashbacks tell their own story, instead of just serving as annotation for the narrative’s main action. Chronicling Oliver Queen’s time on the deserted island in each episode gives the backstory a thorough, organic feel that that’s all-but impossible for a movie to match.

It’s not just the format that distinguishes Arrow. Calling it the best show on the CW may be damning it with faint praise, but it’s head and shoulders above its competition on the network. The acting — particularly by Amell as the titular character — isn’t prone to the over-dramatics that plague the prime-time soaps that typically populate the CW’s schedule. The writing follows the same pattern, employing some of the traditional superhero cliches at just the right moments without overusing them. Arrow‘s understated moments provide just as much tension and drama as its larger set pieces (which, though not the same level as those in a movie like The Avengers, still pack an appropriate punch) It’s a superhero show that exists in the real world — just a slightly different version of it.

Crucially, television provides producers with the opportunity to build other superhero (or superhero-adjacent) characters from within the show itself. Since the first episodes of its first season, Arrow has made a concerted effort to do just that. In the comic books, Green Arrow was often accompanied by Red Arrow, Speedy and Black Canary, among others. Though there have been hints (perhaps obvious ones) all along at the characters in the show that would ultimately become those superheroes, Arrow has afforded audiences the opportunity to get to know the characters not simply as their superhero alter-egos, but as the people they were before inhabiting those roles.

The show has also provided a venue for other major superheroes to be introduced, all within the same DC Universe. “There are so many characters in the DC Universe who haven’t gotten their due in TV and film,” executive producer Andrew Kreisberg said before the show’s premiere in 2012. “We’re so excited to reach into [the DC comics] roster and take some of these lesser-known characters that are beloved by fans, and do our spin on the characters.” On such character is Barry Allen (better known as The Flash), who showed up in Starling City midway through the current season. The original plan was to have one of this spring’s episodes serve as a backdoor pilot for a Flash spinoff series, but earlier episodes in which Allen appeared turned out so well that the CW went ahead and gave The Flash its own pilot. It’s a safe bet that Arrow‘s devoted fans will be eager to follow to his own show a character in whom they’re already invested.

If you need further convincing that the model is working, Marvel launched a TV show of its own, Agents of S.H.I.E.L.D., last fall on ABC. Despite ratings that have dropped by well over 50% since the pilot, the series could still be picked up for another season. The problem that Agents has run into is that, unlike DC with Arrow, Marvel hasn’t been willing to use its superheroes with name recognition to lead its TV show. 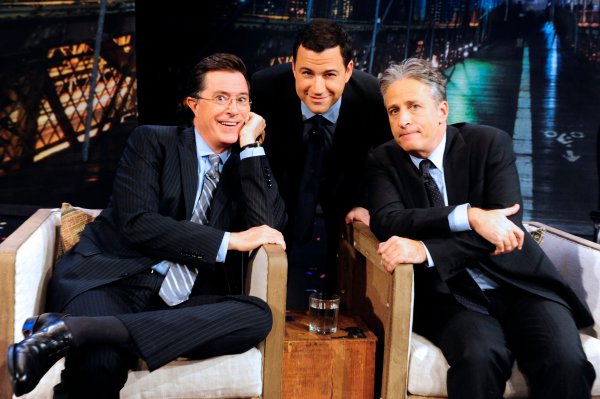 Who's Honoring Him Now: Comedians Commend Colbert on His Late Show Gig
Next Up: Editor's Pick