Global warming, drugs and corruption are among the oft-touted threats to society at large. But according to Thailand’s Department of Mental Health, a more pressing danger is threatening the future “development of the country” — the selfie.

On Sunday, government psychiatrist Dr. Panpimol Wipulakorn warned that young Thais who post pictures of themselves on social media but don’t receive enough positive feedback are encountering emotional problems, which in turn is creating a dearth of well-balanced citizens and could eventually spell trouble ahead for the Southeast Asian nation.

“If they feel they don’t get enough Likes for their selfie as expected, they decide to post another, but still do not receive a good response,” she said in a statement, according to the Bangkok Post. “This could affect their thoughts. They can lose self-confidence and have a negative attitude toward themselves, such as feeling dissatisfied with themselves or their body.”

She added: “This could affect the development of the country in the future as the number of new-generation leaders will fall short. It will hinder the country’s creativity and innovation.”

While you’d be hard-pressed to find a smartphone owner anywhere who hasn’t indulged at some point, that Thais have a penchant for narcissistic camerawork is undeniable — even celebrated royals are selfie-obssessed, and recent antigovernment protests in Bangkok were inundated with hordes of selfie-snapping demonstrators.

“We call them Instagram protesters,” Pakkarat Phattanathanya, a producer with SpokeDark TV, tells TIME. “They turn up and take photos of themselves, but when we interview them they can’t say what the protest is about.”

Pakkarat, 29, herself admits to probably posting two selfies in the past two weeks, but because she’s “not a girlie girl” it’s likely that many of her peers take more. “I don’t think it’s a problem, but some people may get depressed,” she says, adding that “obviously the more Likes, the better.”

Panpimol warns young Thais to guard against selfie addiction by placing themselves in situations where photos are socially taboo. “If you can pass that point,” she says, “next time you will be able to control your selfie-taking behavior.” And who knows? It could even save the country. 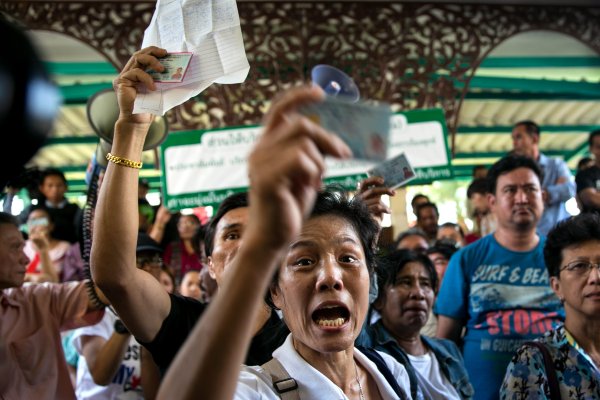 Thai Protesters Disrupted the Elections and Now the Country Is in Total Limbo
Next Up: Editor's Pick