'Joy, Excitement, and Togetherness at the Border.' With Three Hot Pink See-Saws, These Architects Turned the U.S.-Mexico Border Wall Into a Playscape

A spot of brightness recently emerged amid the the gray desert sand and the dark steel fencing laid across the border of Sunland Park, New Mexico, and Ciudad Juárez, Mexico: flamingo pink see-saws that cut through the border wall were installed over the weekend, allowing American and Mexican children an opportunity to play together — with the very wall that separates them serving as part of the playscape.

The three see-saws, which were in use for about a half hour of play-time on Sunday, were intended to bring togetherness and unity to people on either side of the border. The duo responsible, Ronald Rael, an architecture professor at UC Berkeley, and Virginia San Fratello, an interior design professor at San Jose State University, first conceived of the project ten years ago. (Rael and San Fratello are also the co-founders of the 3D printing company Emerging Objects.)

In a caption accompanying a video and pictures of the see-saws in use, Rael wrote that that the project was “One of the most incredible experiences of my and [San Fratello’s] career, bringing to life the conceptual drawings of the Teetertotter Wall from 2009 in an event filled with joy, excitement, and togetherness at the border wall.”

The installation was put to use by the children on both sides of the fence. Rael and San Fratello both posted images on social media showing kids — and some adults — playing together on the seesaws. According to San Fratello, the children lived close to the border fencing in both countries, and were already outside when the see-saws were installed. “As soon as someone comes up to the border wall, they come up and will engage you,” she tells TIME. “When we showed up with the teetertotters, they were there and ready to play.”

Rael and San Fratello began conceiving the project while doing architectural work near the border following the passage of the Secure Fence Act of 2006. “We had been traveling in that region and saw the increased border security and the construction of the wall over the years,” San Fratello says. “We started to develop these counter proposals and commentary as a way of rethinking what the border is.”

While the border is quite literally a dividing line between the United States and Mexico, San Fratello says that is “also a place where people come together. We wanted to create scenarios that would celebrate togetherness. And also highlight the ridiculousness of the border wall.”

They did not seek permission from either government before the installation, she says. In a statement to TIME, a U.S. Customs and Border Protection official says U.S. Border Patrol agents “encountered a small group who identified themselves as local university faculty/staff at the border wall. They had placed boards through the wall and appeared to be playing with residents of Mexico while recording the engagement.”

“The group removed the boards and left the area without incident after it was established that there was no advance coordination,” the statement continues. “Agents ensured that no people/goods were crossed during the encounter.”

Though the border has become politicized since Donald Trump was elected President following a campaign built on the promise of wall between the United States and Mexico, San Fratello emphasized that she and Rael had been doing projects like this long beforehand. Rael had previously given a TED Talk highlighting novel hypothetical uses for the border wall — as fencing for a baseball field, say, or as a giant instrument. “Honestly, [Trump’s] presidency has just brought attention to the work that we’ve been doing,” San Fratello says.

“Children and adults were connected in meaningful ways on both sides with the recognition that the actions that take place on one side have a direct consequence on the other side,” wrote Rael on Instagram.

According to San Fratello and Rael worked with artisans in Juárez to build the see-saws. They are made of lightweight steel, she explains, and “designed to be installed quickly and easily using the wall itself as a fulcrum.”

“We could literally set [them] up in one minute,” she says.

They chose the location because it was a place where people in either country could directly approach the fence. The see-saws were painted hot pink to “pop and be vibrant, but also to honor the women who died during the femicides and the time of violence in Juárez,” says San Fratello, referring to the hundreds of women and girls murdered in Ciudad Juárez since 1993.

San Fratello says she and Rael hope, “that people will see this act of joy and happiness and positivity and togetherness and realize that we’re all the same, on both sides of the fence. And that we want the same things for our lives and for our children.”

“We should be together not apart,” she adds. 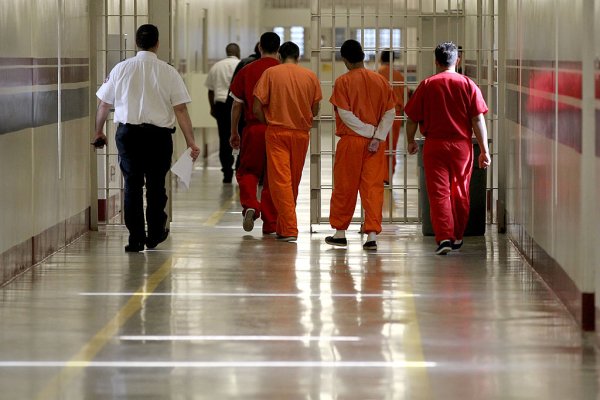 A Mexican Man Awaiting Deportation Has Died in ICE Custody
Next Up: Editor's Pick