By the time the fire at Notre Dame cathedral in Paris was extinguished in April, the entire roof had vanished. Made from hundreds of tons of lead, it had melted in the high heat, dispersing toxic particles across nearby streets and buildings and into the cathedral itself.

Now, an environmental group has accused Paris authorities of doing too little to mitigate the risks of lead poisoning after the fire, alleging that both city authorities and the diocese had allowed residents, visitors and workers to be exposed to a “toxic fallout.”

After the Notre Dame fire, officials said there was no danger to people living and working in the surrounding area. But the lawsuit, filed by the group Robin des Bois, alleges the city knowingly put people in danger by doing too little to tackle the fallout.

TIME exclusive: Inside the Fight Over How Notre Dame Should Rise From the Ashes

Lead poisoning, caused by ingesting too much of the substance through the air or through food and drink, can be especially dangerous to pregnant women, leading to developmental problems in unborn babies or miscarriage. But it can also affect children and other adults. Symptoms can include high blood pressure, memory loss and hearing loss.

A worker prepares to install a net in the cathedral.
Patrick Zachmann—Magnum Photos for TIME

An investigation by the French news site Mediapart revealed that French authorities did not carry out lead tests at kindergartens and schools near Notre Dame until a month after the fire. When the tests were finally carried out, according to Mediapart, one found levels of lead that were 10 times higher than the lowest level considered to be dangerous to human health.

Now, several schools are being “deep cleaned” to remove lead, according to the Guardian.

Cleanup at the cathedral was paused earlier this month over concerns that precautions to avoid lead poisoning were not stringent enough, according to Sky News. When TIME visited the Notre Dame site in July, we were obliged to wear disposable overalls and advised to launder all clothing afterward to disperse dangerous lead particles. 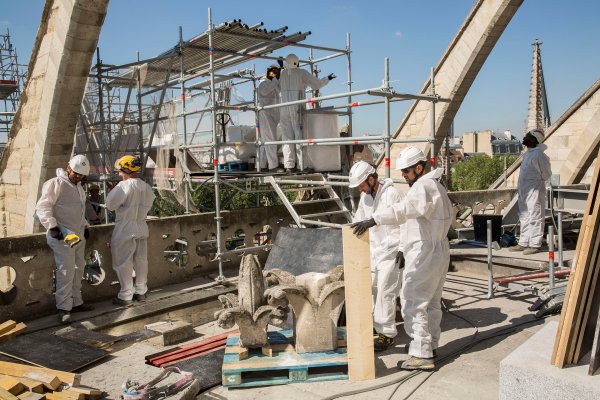 Inside the Fight Over How Notre Dame Should Rise From the Ashes
Next Up: Editor's Pick