Gwendolyn Aloia doesn’t know if her late husband Louis’s ashes are actually his.

In 2013, Aloia donated her husband Louis’s body to science, signing a consent form that willed his remains to medical or scientific testing. The Biological Resource Center, a now-closed for-profit company that accepted bodies of the deceased, took Louis, returned his ashes to Aloia and later sent her a letter claiming that his parts had been used for scientific purposes.

Any closure Aloia, 69, had regarding her husband’s death evaporated about 10 months later, when she turned on the TV to see hazmat suit-clad FBI agents raiding the Biological Resource Center as part of criminal investigation.

Inside, the FBI found freezers stuffed with cut-up body parts and piles of limbs unrelated to each other in various locations throughout the facility, according to a civil lawsuit filed against the Biological Resource Center and its former owner Stephen Gore. In addition, as part of what investigators described as a morbid joke, was the torso of a large man whose head had been replaced by that of a very small woman, according to the lawsuit.

Gore, who is representing himself in the lawsuit according to court documents, did not respond to TIME’s requests for comment. He pleaded guilty in 2015 to federal charges of conducting an illegal enterprise, the Arizona Republic reports, and was sentenced to four years of probation and a deferred one year sentence in jail, which he avoided serving due to good behavior.

Aloia, who was told her husband’s body parts were being used for research, later found out that some of his remains were sold to another company in Illinois, which in turn, sold them to a Michigan-based business, according to the lawsuit. It’s not clear what the box containing what the company said were Louis’s ashes really carries.

Now, Aloia is one of 33 plaintiffs who are suing the Biological Resource Center for deceiving them about the fate of bodies of their deceased family members. The company is accused of mutilating bodies and selling them to a variety of third parties without consent. Evidence collected by FBI agents from the Phoenix-based facility, and other companies throughout the U.S. were made public in the lawsuit.

The plaintiffs suing the Biological Resource Center say the remains of their family members were taken through “false statements” and that they were misled about how the bodies would be treated. Multiple people alleged the bodies of their family members were sold, without their consent, to the Department of Defense for use in military testing—even though the bodies were donated for scientific testing for other specific purposes, such as research on cancer or Alzheimer’s.

While it’s not uncommon to donate the remains of deceased people to the military or to law enforcement for training purposes, families or next-of-kin must authorize such actions, says Michael Burg, one of the attorneys representing the plaintiffs.

“If you want to donate a loved one’s body to be blown up by the Department of Defense, there’s a special consent form,” he tells TIME. “If you want to train police dogs to find bodies using your mother’s leg, you have to say so.”

Being misled about what happened to a family member’s body “brings back the grief,” he tells TIME. “You don’t get closure. You feel stupid.”

“They’re grave robbers, but they don’t even have to do the physical work to get the body,” he says.

Arizona’s body-parts industry remains highly unregulated, despite a state law passed in 2017 that bans body-donation companies from operating without a state license that has not been implemented and no licenses have been issued. That leaves little oversight over companies that take dead bodies, and then sell them for parts. According to Burg, the problem is not just in Arizona—similar cases have cropped up in places like Colorado, Illinois, Michigan and Washington. FBI agents found conditions in Illinois and Michigan to be “at least as horrific, if not worse,” than what they found in Arizona, the lawsuit says.

Sharona Hoffman, a professor of law and bioethics at Case Western Reserve University, tells TIME that while the organ donation industry is heavily regulated at the federal level, donations of whole bodies are not.

“It just not a high priority,” she says. “One issue is, the person is deceased. Nobody is getting physically hurt. It’s just disrespectful and often not what the family thought when they made the donation.”

For Aloia, a cancer survivor who would love for her body to eventually be studied to find a cure, the experience with the Biological Resource Center has corrupted the entire notion of body donation. She hopes the lawsuit and impending trial will bring about legislation that makes sure the body-donation industry is fully monitored so others don’t have to face the same questions she did about her late husband’s remains.

“It’s beyond words that human beings can do this,” she says. “For all I know, that could be my husband’s body that they attached someone else’s head to.” 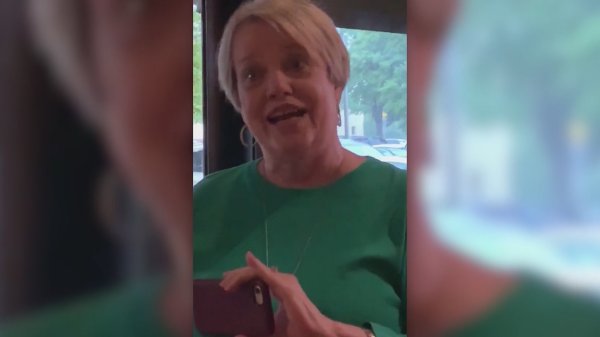 North Carolina Woman Who Called Black Restaurant Customers a Racist Slur Says She Would Do It Again
Next Up: Editor's Pick