Snow-covered personal effects of those deported to the Auschwitz concentration camp in Poland litter the train tracks leading to the camp's entrance, circa 1945.
Hulton Archive—Getty Images
By Elliot Ackerman

In the darkest years of the Second World War, Witold Pilecki, a Polish cavalry officer turned resistance fighter, undertook the most audacious of missions: to get himself arrested by the Germans and sent to the Nazi concentration camp at Auschwitz. On September 19, 1940, he went out during a Warsaw street round up and was arrested. He was also successful in the mission that followed: to sabotage the camp and smuggle news to the world through Polish resistance networks of the atrocities occurring within. Only the world wasn’t ready to listen. In his new book, The Volunteer: The True Story of the Resistance Hero Who Infiltrated Auschwitz, veteran foreign correspondent Jack Fairweather has unearthed the lost story of Auschwitz inmate number 4859, Witold Pilecki, who organized resistance in the camp for nearly three years and who after the war was relegated to the obscure corners of history, until now.

I recently spoke with Fairweather about his new book and research to tell this extraordinary story.

How did you first come across Witold Pilecki?

In 2011, I had met up with a reporter friend, Matt McAlester. We’d covered the wars in the Middle East together and were trying to make sense of what we’d witnessed. Matt had travelled to Auschwitz and learned about a resistance cell in the camp. I remember being blown away by this idea. There were guys in Auschwitz who were assassinating SS officers, stealing radios to broadcast messages, sabotaging facilities, copying and smuggling out records. I thought of the camp as the ultimate symbol of suffering and victimhood. But Pilecki offered a whole new way of thinking of the camp through the eyes of someone bent on taking the place down. He was this phenomenal problem-solver who brought an amazing creativity and resourcefulness to everything he did in the camp.

Pilecki’s mission was pretty audacious. Can you tell us about his motivations?

Before the war Pilecki was living a pretty uneventful life in eastern Poland, farming and raising his kids with his wife. That was one of the things that drew me to him – here was an ordinary guy who was presented an incredible choice. And in that moment of decision he was suddenly prepared to risk everything. Pilecki was a patriot and a devout Catholic and his faith helped sustain him in the camp. But what I came to realize was that his mission itself had this revolutionary power. The Nazis were trying break people down along racial lines, to dehumanize them, and strip away their common bonds. In Auschwitz, the prisoners were being starved to death, beaten, abused. When Pilecki started recruiting in the camp, he was entrusting people with the secret of his mission and demonstrating crucially that something greater than themselves could endure.

Poland’s post-war communist government virtually erased Pilecki from the record. What was it about his story that upset them and why did it take so long for his story to emerge?

After the war, Poland was occupied by Soviet forces and a Communist government installed. Pilecki insisted on fighting on against this second occupation but he was captured, put on trial, executed and all traces of his wartime record destroyed or locked away in the vaults. His family only learnt details of his mission to Auschwitz in the mid-1990s. Since then his story has slowly emerged.

You’re known for your immersive approach to your research and reading the book feels like plunging into a film. How were you able to recreate Pilecki’s world in such detail?

One of the amazing things I discovered in my research was just how many people were still alive who had known Pilecki. Some had never shared their memories before – either because they’d dared not, or simply because no one had asked them. I also wanted to follow in Pilecki’s footsteps as much as possible. The route of his extraordinary escape from the camp in 1943 was unknown beyond the names of a few places where he sheltered. There was only one way to connect the dots – that was to recreate his breakout down to the exact moment at 2:00 am when he dashed for freedom from the camp, and then sleeping rough like he did along the way. It gave me a deep appreciation for his physical stamina – he crossed 100 miles of Nazi-occupied territory in little more than a week – but best of all I ran into some of the families who sheltered him and even remembered snatches of dialogue from that time. It gave me chills to hear words he’d spoken 80 years ago being spoken once again.

Ultimately, Pilecki’s greatest challenge when trying to raise the world’s awareness to the holocaust wasn’t from the Germans, but from the Allies, can you discuss a bit about why that was and what lessons we can glean from his experiences?

What Pilecki witnessed in the camp was absolutely unprecedented in human history. He had to figure out what the Nazis were doing with each new step they made towards developing a death factory. He couldn’t always grasp the scale of the murder unfolding before him. I think everyone who read the reports he was able to smuggle to the Polish resistance – first in Warsaw, then in London, and in Washington D.C. – struggled to make sense of the unimaginable. What made Pilecki stand out was that he was compelled to act. His story remined me that empathy is a choice – just like his decision to volunteer for Auschwitz in the first place. The Nazis were counting on the world turning away from their crimes. The Italian survivor Primo Levi recounts being told by an SS guard upon arrival in Auschwitz in 1944. “However this war may end, we have won the war against you; none of you will be left to bear witness, but even if someone were to survive, the world will not believe him.” Pilecki asks us, no matter how gruesome the subject, no matter how difficult our own circumstances, that we never stop trying to understand the plight of others. Witold died believing that he had failed to deliver his message. My hope is that this book will help us hear him. 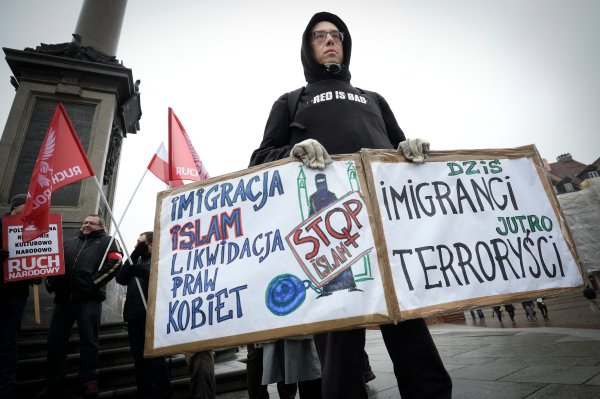 We Analyzed How the "Great Replacement" and Far Right Ideas Spread Online. The Trends Reveal Deep Concerns
Next Up: Editor's Pick