'This Might Be My Last Night': What Chaplains Saw in World War II

An exasperated Father Henry Heintskill, C.S.C., a Notre Dame chaplain posted to naval duty in the Pacific, faced the same issue with which almost every military chaplain grappled during World War II—how to perform the multiple tasks that normally required the services of two or three chaplains. “There are all sorts of problems the men have,” Father Heintskill wrote in a letter to his superior, “they’re worried about conditions at home, etc. We have to do what we can.” He explained that after one Friday evening service, at least 200 men gathered for Confession, requiring him to remain an hour after lights out at 9:30 p.m. “If ever I felt that I ought to be five priests it was that week.”

Chaplains celebrated Mass and helped the men complete government forms. Some soldiers, not long out of high school, wondered what combat would be like. Others asked about the morality of taking another man’s life.

One duty, however, was paramount—to be at the side of a soldier or sailor as the young man died. It was then that the chaplain could administer Last Rites and its promise of dying with a clear conscience.

That was evident as soon as the first day of war, when 90 Japanese aircraft struck Clark Field in the Philippines shortly after noon. Father John Duffy, a Notre Dame diocesan priest from Ohio, eluded bullets and bombs as he ran to the field, littered with dead and wounded, to hear confessions and administer Last Rites. To avoid wasting precious moments by inquiring about the soldier’s faith, he gave Last Rites to any dying serviceman he came across. “I knew it would be effective for the members of my faith & that it would do the others no harm,” he explained later. “There wasn’t sufficient time for inquiry about religious tenets of the wounded.”

Four months later, Father Duffy lay at the receiving end of the sacrament. After enduring severe abuse at the hands of cruel Japanese guards on what became known as the infamous Bataan Death March—“Extreme Unction, Baptism, Confessions administered daily on march,” wrote Father Duffy. “Death, pestilence, hunger, exhaustion, depleted all.”—the priest lay on the ground, apparently dying from bayonet slashes to his body. A Protestant chaplain knelt beside his friend, held Duffy’s head in his hands, and prayed, “Lord, have mercy on your servant. He’s a good man who served you well. Receive his soul.” Within moments another Catholic chaplain came upon the scene and, also thinking the priest was dying, anointed Father Duffy.

The importance of Last Rites extended even to the enemy. Two and one half years later, during the bitter combat in Normandy following the June 6, 1944, invasion, Father Francis L. Sampson spotted a German soldier lying in a creek a few feet away. He crawled over to do what he could for the enemy soldier, but as Sampson lifted him into his arms, the German groaned a few times and died. Because he saw a higher duty, the Catholic chaplain from Notre Dame, wearing an American uniform, gave absolution to a German soldier dying in a French creek.

Father Joseph D. Barry, C.S.C., recognized that a paralyzing fear for a wounded or dying soldier was to lie alone on the battlefield, left to contend with his fears. During his more than 500 days in European combat with the 45th Infantry Division, Barry exerted every effort to reach a boy prone on the ground and bring him the peace of knowing that someone was there with him. “After 54 years, I can still see Father Barry administering last rites to soldiers in the field while enemy shells exploded all around him,” wrote Albert R. Panebianco, a soldier in the 45th Infantry Division.

On one occasion Barry talked with a soldier who, due to go into battle in a few hours, feared that “this might be my last night.” The soldier confided that he accepted fear as part of his task, but wondered if he would control his panic and still perform when it counted.

Barry inquired if there was anything the priest could do for him. Above all, the boy told Barry, he had wanted to be a good soldier—for his men, his family, his country and his God—and if he died, would Barry please tell his family that he had fulfilled that wish. During combat later that night, German fire cut down the youth. Father Barry rushed to him, cradled the mortally wounded boy in his arms, and with explosions and combat nearly drowning out his words, shouted into the dying boy’s ear, “Remember how we talked last night. Here it is. And I can say you were a good soldier.”

Father Barry consoled more people than the soldiers he tended. He also penned letters to parents and loved ones, often at the behest of the dying soldier who asked the priest to inform his mother or wife that he loved her. Above all, he made certain that they knew that their son had died with a priest at his side. “I wrote to so many. You could write what they wanted to know more than anything else, ‘I wonder if there was a priest with my boy,’” Barry explained in an interview. “And that is the only reason I wrote,” he said.

In Okinawa, Father John J. Burke, C.S.C., knew the difficulty of fashioning letters to grieving loved ones. After a Japanese torpedo struck the aft portion of his battleship, USS Pennsylvania, on Aug. 12, 1945, killing 20 men, Father Burke mailed 20 responses to loved ones in which he relayed, with dignity and compassion, information about the loss of their son, brother or husband. Rather than send a similar form letter to each family, he instead crafted similar opening and ending paragraphs, but inserted personal information unique to each individual in the main portion. “God bless you in your present sorrow,” Father Burke began each letter. “As the Catholic Chaplain aboard the U.S.S. Pennsylvania I want to assure you that your son [here he inserted their first name] received Catholic Burial. The Holy Sacrifice of the Mass was offered several times for the repose of his soul.”

He then added personal information about each sailor. To Mrs. Angeline Ortbals of Ferndale, Mich., whose son, 19-year-old Seaman 1/c Robert J. Ortbals, died, he wrote that Robert “had a heart of gold” and went out of his way to help his shipmates. To the parents of a sailor named Roemer, he wrote that, “I feel that a boy so young must very soon, if not already, be enjoying the eternal happiness of heaven which is beyond human description and to which, in God’s mercy we all look forward.”

Father Burke closed all letters by explaining that their son had recently attended Mass and received Communion, and that as far as he knew, had led a religious life. “It is impossible for me to express anything that will lessen the sorrow which you must endure. You have returned to God your beloved son on your Country’s Altar of Sacrifice. In this supreme sacrifice your son is most like our Divine Savior; and you, I trust, most like his Blessed Mother. God bless you with the humble and Christian spirit of resignation to His Divine Will.”

Though they conducted many rigorous tasks, the chaplains cherished the knowledge that they had comforted dying young men, and subsequently their families, in these final moments. As Father Duffy related, “I did what I could for each regardless of his faith, and a look of ineffable peace came to the face of many a tortured soul in that last bitter hour on earth.”

John Wukovits is a military historian specializing in the Pacific theater of World War II. The author of numerous books including Soldiers of a Different Cloth: Notre Dame Chaplains in World War II, Tin Can Titans (winner of the 2018 Samuel Eliot Morison Award for Naval Literature), Hell from the Heavens, For Crew and Country, One Square Mile of Hell, and Pacific Alamo, he has also written articles for such publications as WWII History, Naval History, and World War II. He lives in Michigan. 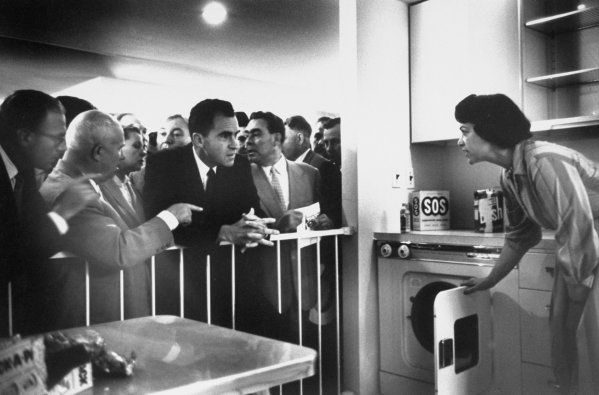 Is Capitalism or Communism Better for Women? How the Kitchen Debate Gave a New Meaning to the Cold War 'Home Front'
Next Up: Editor's Pick