President Donald Trump appeared to be in his element Tuesday night: In a conference room in a five-star D.C. hotel, Trump delivered an animated speech at a summit hosted by the conservative NGO Turning Point USA, touching on topics ranging from securing U.S. borders to what he calls the “fake news” media.

But one thing didn’t look quite right. A reporter for the Washington Post spotted a few peculiarities in what at first glance appeared to be the presidential seal. But upon closer inspection, it looks to have been doctored to incorporate a two-headed eagle — resembling the bird on the Russian coat of arms — clutching a set of golf clubs.

How the seal, which was widely photographed, made its way onto the walls of the Marriott Hotel conference room remains unclear. A White House spokesperson told the Post they did not see the fake seal before it was displayed on-screen.

The Turning Point was also stumped. “It was an A/V mistake… it certainly wasn’t our intention,” a representative from the organization said, adding that he “can’t figure out who did it yet.”

“Someone is going to be getting in trouble,” he said, “but they got one heck of a good laugh out of it.” 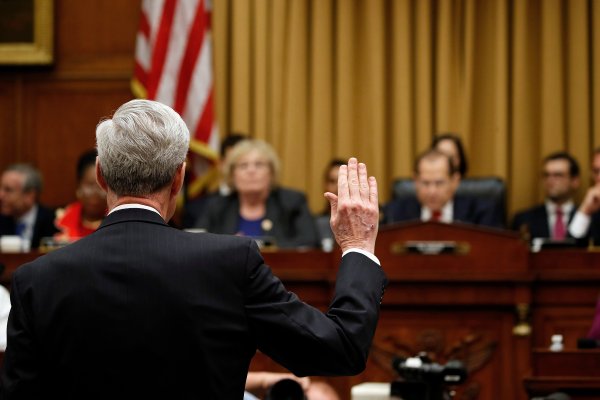 These Are the Facts Behind Trump's Mueller Tweets
Next Up: Editor's Pick