In a Summer of Vapid Hookup Shows, There’s Only One Worth Watching

We should probably have learned by now that reality TV is the wrong place to look for love. It was almost 20 years ago that Darva Conger won Fox’s Who Wants to Marry a Multi-Millionaire?—only to discover that the man she’d wed in front of 22 million viewers had been accused of domestic violence by a former girlfriend. The marriage was quickly annulled. Despite its longevity, ABC’s The Bachelor franchise has a notoriously poor track record for making permanent matches.

Not that long, fulfilling marriages have ever really been the goal of these shows. We watch them because they light up our primal pleasure centers—the parts of us that respond to Darwinian mating competition, in sexual situations that walk the line between tawdriness and network-television propriety. And in the years since Conger became a cautionary tale, reality TV creators figured out how to deliver maximum sex and conflict with minimal bad PR or pressure to commit: Just fly a bunch of good-looking young adults to a tropical paradise; provide them with luxurious lodgings (but not a lick of privacy), a never-ending supply of booze and a pool that will keep them in swimsuits 24/7; and let nature take its course.

Although it has its roots in the roommate romances that ignited on The Real World, this approach solidified into a strategy with early-2000s network TV competitions like Fox’s Paradise Hotel—a sort of musical chairs, but for shared bedrooms—and Temptation Island, in which couples were separated and put in close quarters with alluring people of the opposite gender to see if they’d cheat. In place of The Bachelor‘s fairy-tale artifice, these shows offered unapologetic cynicism and skin. And after disappearing more than a decade ago, both have returned as part of this year’s tidal wave of trashy reality TV. With CBS airing new episodes of its take on UK obsession Love Island (which is essentially Paradise Hotel plus some snarky voiceover narration) five days a week, this is turning out to be the summer of the hookup show. And yet, the sole series of this variety that I still enjoy watching is MTV’s Are You the One?

Now in its eighth season, Are You the One? transports a slew of 20-somethings who admit to “sucking at relationships” to a beachy idyll where they’re tasked with identifying their perfect match—an unknown fellow cast member who, through some byzantine process involving psychologists and interviews with exes, producers have determined is their objectively compatible one true love. In every episode, a series of games, one-on-one dates, a “truth booth” and a formal ceremony in which the housemates pair up with a potential match provide clues as to whether they’re on the right track. If everyone in a given season finds their secret soulmate by the finale, the cast shares a prize of up to $1 million.

The show has been going strong since 2014, but I’m only interested in the current season, which features its first sexually fluid cast. While previous editions limited themselves to male-female couples, each of these 16 singles could potentially match with any other person in the house. From MTV’s perspective, the appeal here is obvious: A pansexual dating game is both novel and likely to resonate with the network’s young target audience. And the mathematical possibilities for sex and drama in a season where everyone could conceivably be attracted to everyone else were sure to be a draw. (That wager recently yielded a fivesome that was captured on fuzzy night-vision video and caused plenty of conflict the next morning.)

I won’t pretend to be immune to the show’s messiness—or, for that matter, to buy into its premise that a panel of experts is capable of identifying genuine soulmates. But for the most part, I enjoy AYTO? (which airs on Wednesdays) because it doesn’t conform to the same gendered clichés that have always plagued heterosexual dating shows. On Love Island and its ilk, all the women are slim, taut and tan, with a propensity for accessorizing their bikinis with stiletto heels and full faces of makeup; the men are tall and broad, with 12-pack abs. Real talk is confined to homosocial groups. While every cast member is conventionally attractive—this is still reality TV—AYTO? offers a range of gender expressions, from androgynous to macho to high-maintenance femme.

Yet the diversity goes beyond the superficial. Two of the singles, transmasculine Kai and gender-fluid Basit, identify as nonbinary. (Basit, who also has a drag persona named Dionne Slay, explains that “my preferred pronoun is ‘Basit.'”) And when the roommates decide to throw a queer prom, cross-dressing abounds. It may not be shocking, in 2019, to see a man in a crop top and mini skirt, but the gender play does fly in the face of rigid, often degrading dating-show norms. Reflecting on the history of AYTO? in an interview, Kai admitted, “I do have a huge problem with the way the cisgendered heterosexual men from past seasons talk about and talk to women. They’re really disrespectful and gross and misogynistic in a lot of ways, right? The house that we had did not have that.”

Fluidity of both sexuality and gender roles helps free the characters from story lines that aren’t just regressive but boring. Whereas dating shows usually juxtapose the same three kinds of women (bubbly, bossy, “crazy”) with the same three kinds of men (charming, aloof, caddish), on Are You the One?, those archetypes and many more are in play across the gender spectrum. Despite bonding over their shared insistence on emotional intelligence, ride-or-die Jenna and Kai, who looks at his cast mates the way kids look at candy stores, fall in amour fou at first sight. No-nonsense Amber immediately vibes with Nour—who grew up in a traditional Muslim family and is finally embracing her queerness in the wake of a failed marriage to a man—only to find that her new love has a dark side. In one of the show’s most emotional story lines, Justin and Max work through issues of trust, fear of commitment and identity to stabilize their initially chaotic relationship. Remy, bless him, is a flamboyantly kinky troublemaker in a mesh T-shirt who just wants to get with as many people of all genders as possible.

I have a theory that, aside from their cost-effectiveness for networks, shows about people hooking up in close quarters are back because viewers—and contestants—raised on Tinder long for the bygone days of IRL courtship. (Never mind that reality TV is arguably several degrees farther removed from meeting in a bar than any dating app.) We want to watch strangers become partners, or at least witness real human chemistry. But the Ken-and-Barbie pairs on most of these shows are too generic to hold our attention. They function more as eye candy. And judging by the dismal ratings for both Paradise Hotel and the American Love Island, that just isn’t enough for audiences who have literally seen these series before. (Though AYTO? has a smaller audience by virtue of airing on cable, season 8’s viewership has grown substantially since the premiere.)

What separates the new season of Are You the One? from Love Island, Paradise Hotel, Temptation Island and MTV’s own ghastly Ex on the Beach isn’t necessarily that its pansexual characters are better people. (Over the course of five episodes, plenty of cast members have revealed themselves to be every bit as shallow and fickle as their straight counterparts.) It’s that instead of representing small variations on ideal male and female bodies in search of their diametric opposite on the gender spectrum, each comes across as an individual looking for a person who really gets them. I’m not confident they’ll all succeed; in fact, midway through the season, they’ve yet to identify a single “perfect match.” But it’s fascinating to watch them try. 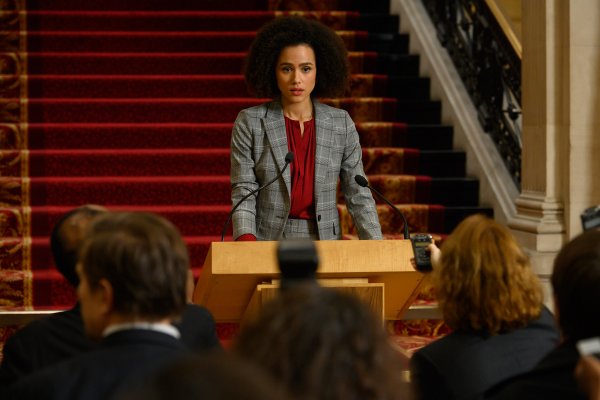 Hulu’s Four Weddings and a Funeral Wants to Say Something About the Rom-Com But Can’t Find the Words
Next Up: Editor's Pick