If Eleven’s (Millie Bobby Brown) reaction to Hopper’s (David Harbour) death in the Stranger Things season 3 finale somehow didn’t already have you bawling your eyes out, then this heartbreaking callback to Hopper’s backstory may do the trick.

Right before Hopper heads down into the secret underground Russian lab to close the gate to the Upside Down, he and El share an emotional moment in Starcourt Mall where they hold hands with the blue bracelet that El frequently wears wrapped around both of their wrists. But as was pointed out by eagle-eyed Reddit user caveemaaan, this blue bracelet holds a deeper significance.

Back in season 1 when a series of flashbacks revealed that Hopper had a daughter who died of cancer when she was 7 years old, she’s shown wearing a blue hair tie. Later, Hopper can be seen wearing the same blue hair tie around his wrist. But after Hop officially adopts El in season 2, she wears the hair tie as a bracelet to go to the Snow Ball with Mike (Finn Wolfhard). El then continues wearing it as a bracelet throughout season 3.

Hopper had clearly walled off his emotions following the death of his daughter. But as soon as El came into his life, some of those walls began to fall. Thanks to the blue bracelet, we know that Hopper and El’s final conversation not only gave him a chance to express how important she was to him, but also cemented their father-daughter bond more than ever. 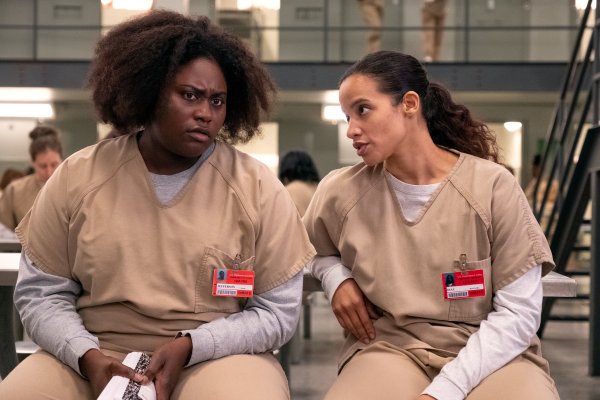 Forget Game of Thrones. Orange Is the New Black Is the Most Important TV Show of the Decade
Next Up: Editor's Pick