A black lawmaker in Georgia says a white man verbally harassed her and told her to “go back where you came from” during a confrontation at a Publix grocery store on Friday.

Erica Thomas, a Democrat and Georgia state representative, alleges that the man cursed at her and called her “ignorant” and “lazy” because she was checking out in an express lane with more than 10 items. Thomas’ young daughter was present at the time.

“Yes, I have 15 items, but I’m nine months pregnant and I can’t stand for long,” Thomas said during an emotional Facebook live video she posted after the altercation.

Thomas said she was so surprised by the man’s remarks that she didn’t think to take out her phone and record them. She also says she never identified herself to him as a state representative.

The exchange took place days after President Donald Trump tweeted that four congresswomen of color — including Reps. Alexandria Ocasio-Cortez and Ilhan Omar — should “go back and help fix the totally broken and crime infested places from which they came.” After the racist tweets, Trump also failed to swiftly shut down “send her back” chants that broke out during a Wednesday campaign rally in North Carolina, in reference to Omar.

“People need to see the hate that is going on in our country,” Thomas said through tears in her Facebook video.

The man who allegedly confronted Thomas at the grocery store, Eric Sparkes, admitted to using expletives toward Thomas however, he denied uttering a racist phrase like “go back where you came from.” Thomas was about to be interviewed by local reporters at the Publix on Saturday, when Sparkes also showed up at the store. A new argument unfolded.

“I called you a lazy (expletive),” Sparkes said to Thomas. “That’s the worst thing I said.”

Sparkes told WSB-TV he is a Democrat of Cuban nationality and believes that Thomas is trying to use the situation to advance her political career.

“This woman is playing the victim for political purposes because she is a state legislator,” Sparkes said.

When local reporters talked to Thomas after the initial interview, they tried to discern if the man really said Thomas should “go back where you came from.”

“I don’t want to say he said, ‘Go back to your country,’ or ‘Go back to where you came from,'” Thomas said. “But he was making those types of references is what I remember.”

WSB-TV reported that Publix has surveillance video and that police are investigating. Thomas says a Publix employee asked Sparkes to leave following the altercation. 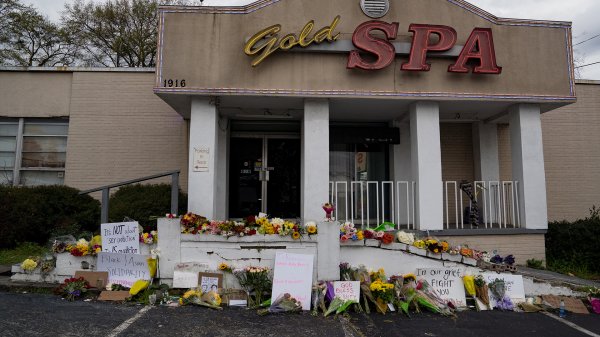