Caster Semenya Won’t Stop Fighting for Her Right to Run, Just as She Is

Caster Semenya walks along the side of the Stanford University track in late June, stopping to take selfies with her fans, who crowd around a fence to get a glimpse of her. “We love you, Caster!” shouts one onlooker. A guy gives her a thumbs-up. “I can’t believe I’m this close to her,” says a woman who, like Semenya, hails from South Africa. The two-time Olympic gold medalist and triple world champion in the women’s 800 m has just won the prestigious Prefontaine Classic at Stanford, finishing the race in 1 min. 55.70 sec., the fastest 800-m time ever clocked on American soil. “When you’re great,” Semenya tells TIME while enjoying the adoration, “you’re great.”

If the global governing body for track and field had its way, however, the scene at Stanford would be a mirage. Last year, the International Association of Athletics Federations (IAAF) issued new rules mandating that female athletes with “differences of sex development”–defined as the presence of XY chromosome pairings normally found in men–could not compete in women’s races from the 400 m to the mile, unless through medical intervention they lowered their natural testosterone to a level closer to what the IAAF calls the “female range.” The IAAF argues that the high levels of testosterone produced by athletes with such a genetic makeup provide them with an unfair advantage over other female athletes in these races. Semenya, who has faced scrutiny surrounding her gender for a decade and would be ineligible to run the women’s 800 m naturally under these new rules, challenged them in the Court of Arbitration for Sport (CAS), which settles global sports disputes. In May, the CAS announced it was upholding the IAAF regulations; Semenya then took her case to Switzerland’s Supreme Court, which ordered a temporary suspension of the rules until it issues a decision. So Semenya ran the Prefontaine race without having to suppress her hormones, and she can compete at the world championships that begin on Sept. 27 in Doha, Qatar.

Her case has stirred passions around the world, as it touches on essential questions about genetics, gender identity and fair play. Is it even possible to classify athletes as men and women when the human body sometimes sends out more complicated signals?

Semenya was born a woman, was raised as a woman and is legally recognized as a woman. “Of course I’m a woman,” she says back at her hotel north of Palo Alto, Calif. “I have a vagina. I don’t have a penis.” She considers the IAAF rule discriminatory. “What they’re saying is, when a woman performs at a high level, it’s a problem,” says Semenya. “But when a man performs, ohhhh great, all hail the greatest.” Even the CAS said in its decision that the IAAF regulations are “discriminatory,” but that such discrimination is reasonable and necessary to promote a level playing field for female athletes.

Semenya insists if the IAAF rule holds up, she’ll refuse to take medication to lower her testosterone. “If I have to walk away, of course I will walk away,” she says. “It’s like killing yourself.” In CAS testimony, Semenya revealed from around 2010 to 2015, at the IAAF’s insistence, she took birth control pills to lower her testosterone; she said the drugs caused her to feel sick constantly, suffer from regular fevers and experience abdominal pain, among other symptoms. Her confidence suffered. She felt like the IAAF treated her like a “lab rat,” and she says she won’t take part in another experiment.

What baffles Semenya most: Why would the IAAF want to drive a star attraction from its sport? With her name consistently in the headlines for both her dominant performances–she has won 31 straight 800-m races dating back to 2015–and the biological controversies, Semenya is probably track and field’s biggest celebrity. She’s endorsed by Nike, which featured her in a new ad campaign. Last year, LeBron James caught one of her races in Berlin. One fan at the Prefontaine Classic swears she “never felt more alive” than when she just watched Semenya glide. “If people want to come watch Caster Semenya run, then let them watch Caster Semenya run,” Semenya says. “What they care about is just seeing one human inspiring another human. Don’t destroy it! Is it that much to ask?”

Semenya, who earned a university sports-science degree in South Africa in 2018, has taught herself to silence all the noise around her. She believes the IAAF is “obsessed” with her. By paying track officials little mind in return, she’s already a step ahead. “You’re a free soul,” she says. “I run my race, then I’m going home. You’re thinking of me. I’m giving you nightmares. I’m not even thinking about you.” Semenya, however, does use our interview to call out IAAF president Sebastian Coe. She considers him a “chicken” for making his arguments against her in court and the media, rather than engaging with Semenya directly. “He must have balls to come tell me that, ‘Look, Caster, I don’t want you,'” says Semenya. “Then I will tell you, that’s your problem.” (In a statement, the IAAF writes that Coe and the organization “feel very strongly” about preserving fair competition for female runners. “This has never been about one athlete.”)

Semenya talks in a direct manner, with a sort of contagious defiance. She’d seem to make a good psychologist, pastor or politician. (When I mention this to her, she tosses aside public office and preaching. But she’s open to a sports-shrink practice.) From a young age growing up in a rural village in the South African province of Limpopo, Semenya knew she was different. “I have a deep voice, I don’t have boobs, I play around with boys,” she says. “It’s O.K.” But she never questioned her gender. “It does not change that I’m a woman,” she says. “I’m not a man; I’m not going to live like a man. But then if I like trousers, I’m going to wear trousers. If I like suits, I like suits. I’m not going to go around wearing skirts, wearing dresses if they don’t suit me.” So when the IAAF said in court that Semenya was “biologically male,” the description hurt her “more than I can put in words.” It cut to her very being. “You’re calling me something I’m not,” says Semenya. “You should be careful on that.”

With all her gold medals, Semenya could easily abandon this legal fight and walk away from her sport with her place in the record books. But she still has work to do, both on and off the track. Semenya’s in her 12th international season: her idol, 800-m runner Maria Mutola of Mozambique, ran for 21 years and competed in six Olympics. “Why can’t I do that?” Semenya says. The 800-m world-record time, set in 1983 by Jarmila Kratochvilova of Czechoslovakia, is within reach: Semenya ran her fastest-ever race just a year ago, less than a second off Kratochvilova’s pace and the fourth best time ever. “I want to break records and then be the greatest of all time,” Semenya says.

Then there’s the larger battle for her rights, and the rights of others to run free. “There are a lot of athletes who will have the same problem as me, but they cannot fight,” says Semenya. “If I don’t fight for them, no one will fight for them.”

So she plans to run at the Tokyo Olympics next summer, plus Paris in 2024 and Los Angeles in 2028. In June, she gave a pep talk to South Africa’s World Cup team in Paris: she says she could give soccer a shot too. At the 2032 Olympics–wherever they take place–Semenya would be 41: maybe, she jokes, she’ll run a marathon. Or maybe that’s not a joke. “The train is moving, I’m not stopping, you understand?” says Semenya. “I’m here to stay. You’d better get used to it. Or walk away.” 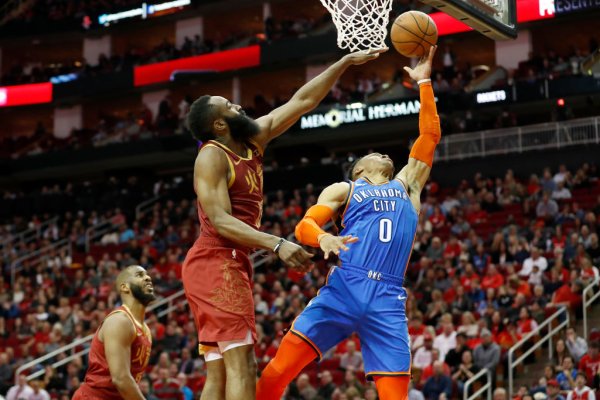 Russell Westbrook Traded to Houston Rockets for Chris Paul
Next Up: Editor's Pick