In this courtroom artist's sketch, defendant Jeffrey Epstein, left, and his attorney Martin Weinberg listen during a bail hearing in federal court, Monday, July 15, 2019 in New York. Epstein's lawyers want him released on house arrest to his Manhattan home while he awaits trial. (Elizabeth Williams via AP)
Elizabeth Williams/AP
By Katie Reilly

A federal judge denied bail to wealthy financier Jeffrey Epstein on Thursday, ruling that he will remain in jail as he awaits trial on charges of sex trafficking and conspiracy.

U.S. District Judge Richard Berman rejected a request by Epstein’s lawyers that he be allowed to live under house arrest in his $77 million Manhattan townhouse until his trial begins.

Berman said concerns about Epstein being a danger to the community were the “heart of the decision.” He cited testimony by two of Epstein’s alleged victims, Annie Farmer and Courtney Wild, who spoke at a bail hearing on Monday and urged Berman to deny Epstein bail, arguing he posed a threat to other girls.

“I find … that the government has established danger to others and the community by clear and convincing evidence,” Berman said.

He called the bail package proposed by Epstein’s attorneys — which included house arrest at his New York City mansion and an offer to put the property up as collateral — “irretrievably inadequate.”

“I’m not suggesting a different bail package would be appropriate because I doubt that any bail package could overcome danger to the community,” Berman said.

He also said prosecutors had provided a “preponderance” of evidence that Epstein, 66, posed a flight risk, citing Epstein’s wealth and resources, including a residence in Paris, and the trove of items discovered by investigators in his mansion, including cash, diamonds and a fake passport.

“He is in a grave position, and he has every motive and means to flee,” Assistant U.S. Attorney Alex Rossmiller had said at Monday’s hearing, the Associated Press reported.

Epstein, who was arrested on July 6, is facing up to 45 years in prison over charges of sex trafficking of minors and conspiracy to engage in sex trafficking of minors. He is accused of sexually abusing dozens of girls as young as 14 from 2002 to 2005 at his residences in New York City and Palm Beach, Fla., enticing them with hundreds of dollars in cash and sometimes paying them to recruit other girls.

He pleaded not guilty last week.

The new charges revisit years-old allegations of sexual abuse against Epstein, who received a more lenient plea deal in 2008 that has been the subject of recent criticism. A November 2018 story by the Miami Herald found about 80 women who said they were sexually abused by Epstein from 2001 to 2006. The story led to a public outcry about the deal, which allowed Epstein to avoid federal charges, plead guilty to state prostitution charges and register as a sex offender.

Epstein served 13 months in jail, but was granted work-release privileges and allowed to work in his office six days per week. On Tuesday, an attorney for some of Epstein’s accusers alleged that Epstein continued to have “improper sexual contact” with female visitors to his office during that time. Epstein’s attorneys did not respond to a request for comment about those allegations. 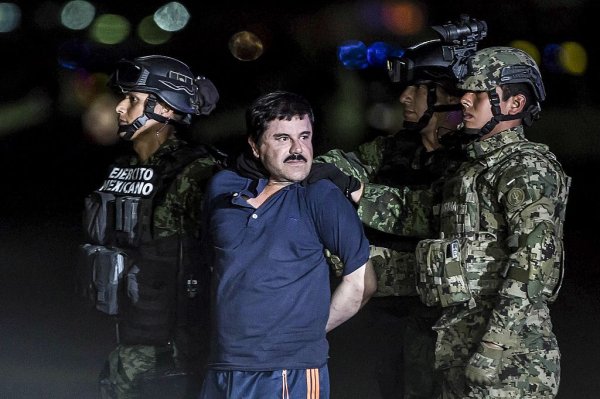 El Chapo Sentenced to Life in Prison in the U.S.
Next Up: Editor's Pick