Anna 'Delvey' Sorokin Was My Friend. Here's How I Helped Bring the Fake Heiress to Justice

Ideas
By Rachel DeLoache Williams
Williams is the author of My Friend Anna: The True Story of a Fake Heiress.

In 2016, Rachel DeLoache Williams, then a 28-year-old photo editor at Vanity Fair, struck up a friendship with Anna “Delvey,” a woman claiming to be a German heiress but soon known to the world as the “Soho grifter.” “Delvey,” actually named Anna Sorokin, introduced Williams to her version of New York City, one studded with spontaneous dinners at high-end restaurants, private training sessions and countless spa treatments. But after Williams agreed to accompany Sorokin on a trip to Morocco, where she was unexpectedly made responsible for bills totaling more than $60,000, she soon began to wonder if her friend was a con artist. Williams testified at the April 2019 trial of Sorokin, a Russian immigrant who was found guilty by a jury in New York City of grand larceny and theft of services for stealing more than $200,000 from banks, hotels and others. (Sorokin was found not guilty of the charges specific to Williams’ case.) In her forthcoming book, My Friend Anna, Williams reveals the role she played in helping law enforcement officials capture Sorokin, who was sentenced to four to 12 years in prison.

New York Assistant District Attorney Catherine McCaw and New York Police Department Officer Michael McCaffrey called me the day Anna was due to appear in court on misdemeanor theft of services charges. “She didn’t show up,” said ADA McCaw. “If you were to text Anna, do you think she’d respond?”

My heart snagged on a beat as I paused to reconsider the likelihood. “Yes,” I told her. It wouldn’t be hard, I reassured myself as I hung up the phone. What was the worst that could happen?

It was the first text I had sent to Anna in almost a month. The tone was like that of so many texts that had come before, but now the purpose narrowed, as did the feeling of who was in control. My goal was to re-establish contact, and uncover her location. I sent the message at half past two: Hey Anna. I’ve been thinking about you today, as I know you had that court date. I wondered how it’s gone for you. In thinking back through everything, I can tell you must have gotten into some sort of situation that I don’t understand. I can’t imagine you intended for things to turn out the way they have. It seems like you must have gotten into trouble somehow. I’m sorry that you didn’t feel like you could tell me the full story — and I’m sorry you’re in this mess, however it happened.

I meant what I said.

Anna said nothing. News of her skipped court date appeared in the New York Post: “Wannabe socialite skips court, now faces arrest,” which meant it was now public knowledge that she was wanted by the police. She must have known that, too.

Her silence lasted until almost five the next day.

I’m in a hospital since Monday, her text said. Bad reception.

I responded immediately with a barrage of questions: What??! Are you ok? Are you in NYC? Should I come by? I remember you hadn’t been feeling well. What happened?

But she was done with answers for the day.

I sent everything to Officer McCaffrey. He was receptive but wanted to be sure I wasn’t overextending myself emotionally, given that I was a victim in the case. Yes, I was nervous, but I was within my comfort zone. And, besides, if I didn’t do this, who else could?

When I woke up the next morning, I saw Anna’s next text. In CA, it read. Broad. Then again, progress was progress. Officer McCaffrey suggested I ask for an address to send flowers, but I was afraid Anna would see through that. Instead, remembering how badly she had once wanted to see the Mirage installation near Palm Springs, I took a roundabout approach: Are you out of the hospital now, and ok? Did you finally go to see Doug Aitken’s glass house?

After that, I waited.

I’m in Malibu for now, she said.

Malibu. Where would Anna stay in Malibu? I was driven to finish the puzzle, and its final pieces were coming together faster than I even realized. On Monday morning, the week before I would be traveling to Los Angeles for a work trip, Anna and I continued our conversation.

Where are you staying? Are you going to be there for the next week? Or are you coming back to NY sooner? I asked, letting her know that I would arrive on Sunday.

I think I will still be in Malibu, she answered.

I wish my Soho House membership included the one in Malibu, I said. I kept the conversation light.

Then, she said: Let’s try to get together in LA next week.

Momentum was building, and yet, as the investigation moved toward its conclusion, I was uneasy. Why did I have to be the one to betray her? And would she know that it was me?

When Anna called that afternoon, I answered spontaneously. Her tone was casual, unaffected by the dramatic tension of our recent past. It was astonishing how quickly we slid into our old dynamic: two friends catching up.

“I’m in rehab,” she confided. She was supposed to be there for 30 days, she explained, and she had been there for two weeks already.

“I’m glad you’re getting help,” I replied. I didn’t ask what for. “Do you get to go to the beach much?” I asked, homing in on her location.

“Yeah,” she confirmed, “they offer beach walks.” The center was just across the Pacific Coast Highway.

How else did she pass the time, I asked — were there tennis courts on the property?

There were, she answered, but lately she’d taken up golf. The facility had a relationship with a country club in Calabasas.

And whom did she play with, I pressed. She had made a few friends, she told me. Anna had entered an enclosed center that catered to the wealthiest people in their most vulnerable state — of course she had made a few friends. After less than 10 minutes, the call dropped, and Anna texted to say that she was off to her next activity. I studied my notes from the conversation and began to do my research.

A fair number of luxury rehab centers dotted the stretch of the Pacific Coast Highway near Malibu, but Officer McCaffrey and I focused on two, Promises and Passages, both of which closely resembled Anna’s descriptions. Costing upward of $60,000 per month, the latter billed itself as the world’s most luxurious addiction rehab center — and as such, for Anna, it seemed the likeliest choice. Though it felt like we were getting close, due to health care privacy regulations it wasn’t so easy to check.

On October 1st, I landed in LA and received a message from Anna asking if I’d arrived. Yes, I told her.

Nice, where are you staying?

The Four Seasons, I answered, but haven’t been to the hotel yet. You still in your place? I asked. It’s not Passages is it?

Yes I am, she replied. Pls don’t tell anyone though.

That place is supposed to be the best, I volunteered.

She asked me to visit, but I demurred. I suggested lunch on October 3.

The day before our lunch date, I called Officer McCaffrey. It was the eleventh hour and I had doubts, not about whether Anna would show up to meet me — I was sure that she would — but about my willingness to proceed. What did I care if Anna got arrested? Whether she did or she didn’t, the damage was already done. It wasn’t going to reverse time, eliminate my stress or restore my finances. Vengeance had never been my motive. For a long time Anna had scared me, but closer up she seemed less threatening.

“Is this the only way she makes her money?” I asked Officer McCaffrey. As far as he knew, deceit was her sole source of income.

How much time do you have for lunch tomorrow? Anna asked later.

One and a half hours, I told her.

Ok noon it is, she wrote back. You choose the spot. I suggested a restaurant called Joan’s on Third.

Once upon a time, not long ago, I had been living my life and doing just fine. Anna’s presence in my world had occurred suddenly and quickly expanded. Her influence spread undetected. While she bought me dinners and invited me on vacation, I deluded myself into thinking that, as reciprocity, my understanding, time and attention would be enough. Meanwhile, under the guise of friendship, she tethered herself to my core. With every hour we spent together, her power grew. Where I felt connection, she felt control.

The text from Officer McCaffrey arrived at 9:18 a.m. on October 3rd. Call me, it read. I ducked around the corner, cell phone to my ear, bracing myself. “They got her,” he said. Anna was arrested by the Los Angeles Police Department as she left Passages that morning. She was in custody, on her way to wherever it is that criminals who are arrested in Malibu are taken for booking. At noon, the very minute I was scheduled to arrive at Joan’s on Third, I was of course still on my work site. I sent a series of messages to Anna:

Me: Hey, I’m running like 10mins late — almost there

Me: Are you close?

Me: I’m sorry I had to leave. Maybe you’re at the wrong location???

Me: Text me later when you get back on WiFi and we can find another time to meet.

I never went to Joan’s on Third for lunch, so why bother pretending that I had? Was I afraid that she would discover my involvement in her arrest? Most definitely. But that wasn’t the only reason.

As Anna had done with me, I wanted her to believe my lie. 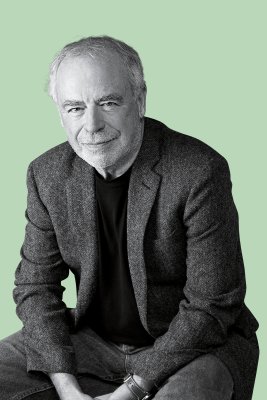 Richard Russo on Misogyny and Why War Is Never Far Away
Next Up: Editor's Pick