Several dozen members of the National Radical Camp demonstrate against immigration in Warsaw, Poland on Nov. 24, 2018.
Jaap Arriens—NurPhoto/Getty Images
Ideas
By Jacob Davey and Julia Ebner
Davey is a Research Manager at ISD where he leads on research into the far-right and hate crime. His work focusses on mapping far-right extremism and the development of new tools for tracking hate speech globally. In this role Jacob has advised national and local policy makers on right wing extremism.
Ebner is a Senior Research Fellow at ISD, specialising in far-right extremism, reciprocal radicalisation and European terrorism prevention initiatives. Julia is the author of ‘The Rage: The Vicious Circle of Islamist and Far-Right Extremism’ as well as several peer-reviewed articles, book chapters and policy briefings.

“We are being replaced,” the Belgian politician Dries van Langenhove repeatedly posted on social media this Spring. Despite his use of words echoing the rhetoric found in two recent terrorist manifestos, his far-right party Vlaams Belang (“Flemish Interest”) made historic gains in Belgium’s 2019 triple election.

Popular support for politicians who build their campaigns around anti-migrant and anti-Muslim themes have surged across the Western world. So have hate-speech, hate crimes and terror attacks against minority communities, as data from the US, the UK and Germany show. Just over the last few months, the idea that white populations are being systematically replaced by non-whites has been referenced in major terrorist attacks in Christchurch, New Zealand and San Diego, California.

Our new research has found that the theory that became known as the “great replacement” has gained significant traction across social media.

The so-called ‘Great Replacement’ theory argues that white populations are being replaced at an ethnic and cultural level through migration and the growth of minority communities. Certain ethnic and religious groups – in particular Muslims – are typically singled out as being culturally incompatible with the lives of majority groups in Western countries and thus a particular threat.

Conversation around “the great replacement” is steadily increasing, with the number of tweets mentioning the theory nearly tripling in four years from just over 120,000 in 2014 to just over 330,000 in 2018. English-speaking countries now account for 33 percent of related online discussions.

How could something that was a fringe idea in France in 2014 morph into a globally propagated concept? Our monitoring of extremist groups across the world suggests that European Identitarian and US alt-right networks have skillfully employed a communications playbook that draws on tried-and-tested tactics including the use of memes and video content to promote the “great replacement” theory across social media platforms. Ideological legitimacy is added to these through pseudo-scientific studies into race and intelligence, as well as the use of official demographic data which is often twisted and misread.

To reach selected target audiences, campaigns are tailored to match the grievances of different communities – reaching from anti-LGBT and anti-abortion narratives to white identity and anti-establishment messages. In the US, the “It’s okay to be white” campaign launched by the alt-right in 2017 illustrated how this is sometimes done in an unbranded and anonymous fashion. Such “Trojan horse” campaigns can be especially effective in getting amplification from more mainstream influencers. Ultimately, “It’s okay to be white” propaganda was not just spread by extreme-right activists in the form of campus stickers and Twitter hashtags, but also received a boost from Tucker Carlson on Fox News.

Our analysis shows that theories such as the “great replacement” and “white genocide” have effectively made their ways into societal and political discourse. In the past year alone, politicians from across Europe have explicitly mentioned the theory in speeches, interviews and on social media. In a number of other incidents politicians have used fiery rhetoric to discuss migration in a way which closely mirrors the language employed by extremists. President Donald Trump was among the ten most influential figures referenced in English-language Twitter conversations surrounding the “great replacement” theory.

We observed a strong interplay between the slick social media campaigns launched by extremist groups, the hyper-biased reporting by alternative media outlets and far-right blogs, and the anti-immigration messaging of political actors and commentators. For example, calls for “remigration” – a euphemism for the mass deportation of people with non-European ancestry – initially emerged in extreme-right circles but are now echoed in parliaments and in the European election manifestos of far-right populist parties.

Centrist politicians, commentators and researchers have been unsuccessful in reclaiming the debate around migration-related topics in recent years. Their tendency of staying away from contentious issues such as ethno-cultural transformation processes has made it easy for extremist activists and far-right populist politicians to promote their talking points.

A lack of willingness to openly discuss and acknowledge common concerns around the societal changes wrought by migration has left a vacuum, which extremists fill to their advantage. They have tapped into anxieties that remained unaddressed by the moderate middle, and therefore monopolize the debate as a result. The far right has set off a vicious circle of disinformation by filling the information and communication gap on topics such as demographic change with emotive, speculative and hysterical content instead of facts.

These trends are deeply concerning. But speaking about just how alarming they are won’t do much to resolve the underlying problems. Instead, today’s anti-migration backlash should prompt all those who have stood up for open, liberal and generous societies to ask the obvious, albeit deeply uncomfortable, question: Is the battle on migration policy lost?

We cannot bury our head in the sand – migration to the West will continue, especially as climate change continues to hit developing countries in the years to come. The political center needs to demonstrate leadership in regards to the history, dynamics and consequences of migration, and actively push back against voices which promote the theory, either through dog-whistle tactics, or explicit endorsement.

We need to proactively expose the one-sided, ill-informed and historically myopic nature of the far-right’s assessment of migration. This could also be done through the introduction of migration-focused courses in schools, alongside digital literacy skills, so that students can brace themselves from the distortion and manipulation tactics employed by extremists.

Ultimately, our observations suggest that extremist rhetoric tends to revolve around concerns of ethnic makeup. The “great replacement” theory doesn’t refer to threats to jobs, but rather the skin color of the population. National identity should not be tied to ethnicity and we need politicians and frontline practitioners to champion this. 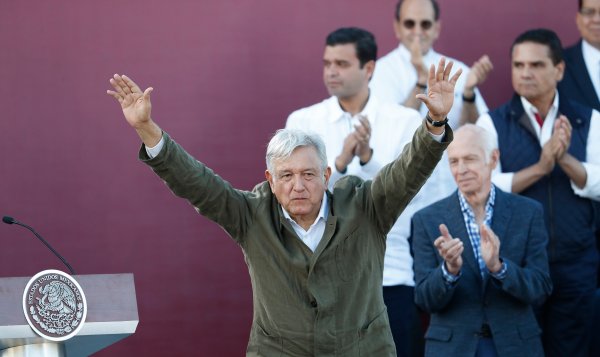 The Quick Read About… Mexico’s Recent Political Drama
Next Up: Editor's Pick