Surgeons announced on Monday that they have separated conjoined twin sisters after multiple surgeries that took more than 50 hours to complete.

Two-year-old Safa and Marwa Ullah underwent three surgeries carried out between October 2018 and February this year at Great Ormond Street Hospital in London, according to the Guardian.

The sisters, who hail from Charsadda in Pakistan, were born with their skulls and blood vessels joined together.

“We are extremely excited about the future,” Zainab Bibi, the girl’s mother, said according to the Guardian. Their father died of a heart attack before they were born.

Doctors used the latest technology to complete the procedures, including virtual reality to create exact replicas of the girls’ skulls, and 3D printing to create models to practice on, according to the Guardian.

The surgeries, which were paid for by a private donor, were not without complications. The Guardian reports that one of the twins suffered a stroke during one of the surgeries. In the final operation, doctors built the girls new skulls using their own bones.

“We are delighted we have been able to help Safa and Marwa and their family,” neurosurgeon Noor Ul Owase Jeelani and craniofacial surgeon Prof David Dunaway said in a statement, according to the Guardian.

Great Ormond Street Hospital posted a photo on Twitter of the twins leaving the facility on July 1.

According to a University of Illinois at Chicago and Cook County Hospital study, twins joined at the head are found in only one in every 2.5 million births and account for just 2 to 6% of all conjoined twins. 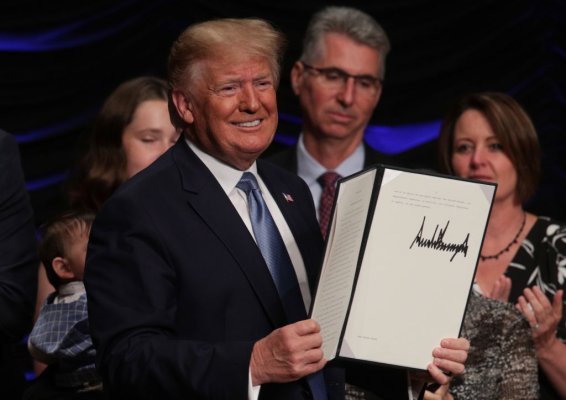 How Trump's Executive Order Could Save Lives by Transforming How the U.S. Treats Kidney Disease
Next Up: Editor's Pick