President Donald Trump has faced several setbacks on his immigration agenda in recent weeks. The Supreme Court blocked an effort to ask respondents if they are U.S. citizens in the 2020 Census. Massive immigration raids he promised over the weekend failed to materialize in a significant way. And he backed down on threats to levy tariffs against Mexico and close the southern border if it didn’t do more to stop the flow of migrants.

But over the weekend, he reset the topic with a series of racist tweets attacking four freshman Democrats, followed by an impromptu press conference defending himself.

“These are people that hate our country. They hate our country. They hate it, I think with a passion,” Trump said Monday, standing at a podium decorated with the Seal of the President of the United States, in front of the South Portico of the White House, during an even designed to bring attention to companies that manufacture goods in the United States. “They are free to leave if they want,” he said of the elected lawmakers.

The president’s remarks showcased a combative approach that he appears to be taking to immigration as he mounts his re-election campaign. Trump begins by threatening a dramatic shift in a particular policy, often testing the limits of presidential power and decorum. Even when followed by a retreat, each promise starts up a news cycle that he believes energizes his core supporters. And a losing fight is then accompanied by further rhetorical pushes.

Trump’s divisive rhetoric has put him in a league with American demagogues like Sen. Joseph McCarthy in the 1950s and Father Charles Coughlin in the 1930s, said Timothy Naftali, a historian at New York University and former director of the Richard Nixon Presidential Library and Museum. “His goal is to divide the Democratic Party and his goal is to win, narrowly, in the Electoral College,” Naftali said.

“I suspect racism is at the heart of this. By now it is an unmistakable trend. He attacks people of color, and it is usually women of color. By his own public actions, he is both a racist and a misogynist,” said Naftali.

“We don’t leave the things that we love,” said Rep. Alexandria Ocasio-Cortez. “We are focused on making it better,” Ocasio-Cortez said. Rep. Ayanna Pressley said she and others in Congress would not be sidetracked by Trump’s barbs and would continue to work to stop “hateful” policies being rolled out by the administration. “I encourage the American people and all of us in this room and beyond to not take the bait,” Pressley said. “This is a disruptive distraction from the issues of concern and consequences to the American people.” Rep. Ilhan Omar described Trump’s claim on Monday that she loves Al Qaeda and hates Jews as “ridiculous,” adding: “This is his plan to pit us against each other.”

As Trump responded to the fallout from his tweets, his staff pressed ahead on further policy ideas. This week, the Trump Administration is set to begin enacting sweeping new changes to U.S. asylum practices, promising to not consider asylum claims from people who passed through countries where they were eligible to request protection. If enacted, the change would mostly impact Central American migrants fleeing criminal violence and economic hardships at home, who must travel through Mexico to get to the U.S. The American Civil Liberties Union and other organizations said they would immediately challenge the move in court.

“The Trump Administration is trying to unilaterally reverse our country’s legal and moral commitment to protect those fleeing danger,” said Lee Gelernt, deputy director of the Immigrants’ Rights Project of the American Civil Liberties Union. “This new rule is patently unlawful and we will sue swiftly.”

The steps the Trump Administration has tried to take to handle the large number of people crossing the border and claiming asylum hasn’t worked, says John Sandweg, who served as acting director of Immigration and Customs Enforcement under President Obama. “I don’t care where you stand politically, this has been mismanaged,” says Sandweg. “What they’ve done has not been effective.”

The Administration has spent money on replacing border barriers and adding detention space but has not addressed the lengthy backlogs in immigration courts by hiring large numbers of new immigration judges, Sandweg says. “It’s almost as if they want the crisis to continue,” says Sandweg, “as a way to get Congress to breakdown and make significant changes to the asylum laws.”

Trump’s critics say that even when the policies haven’t been implemented, the underlying message they conveyed has been received. That was the case with the citizenship question on the Census, which critics argued would lead to a lower response rate from households with undocumented immigrants.

“Even with the court order blocking the question, we’ve now dealt with over a year of fear mongering about the census that’s all based on the citizenship question,” said Thomas Wolf, counsel with the Democracy Program at the Brennan Center for Justice and whose work focuses on the census. “When you have members of the Administration tweeting and hitting the airwaves, talking about the possibility of a citizenship question, people will still be scared after the question is blocked again.” 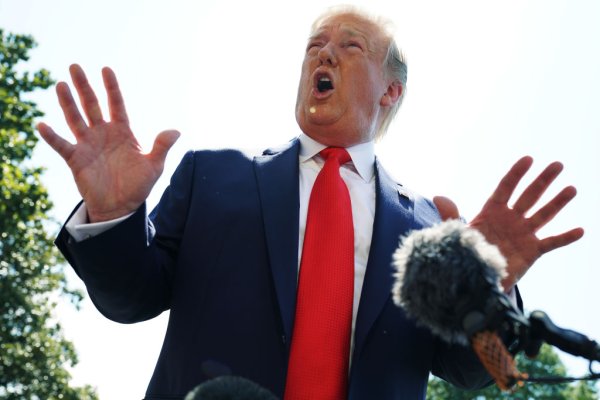 President Trump Invited a Cartoonist Known for 'Anti-Semitic' Images to a White House Social Media Summit
Next Up: Editor's Pick