Inside the Progressive Grassroots Driving 2020 Democrats to the Left

When activists gathered in Philadelphia this week for the annual Netroots Nation convention, they represented the progressive grassroots that is driving the 2020 Democratic presidential field to the left.

On stage during the presidential forum on Saturday, Warren reversed President Donald Trump’s standard argument about immigrants and crime, promising to empower the Department of Justice to investigate crimes committed by the government against immigrants.

“Donald Trump may be willing to look the other way, but President Elizabeth Warren will not,” she said to loud applause.

While Warren — who has attended Netroots for years and was on home turf — received the warmest reception, the other candidates were also cheered for many of their progressive arguments and asked to address issues progressives care about. Gillibrand discussed the “enormous amounts of white privilege” she has received and pledged to lift the voices of people of color, Castro reiterated his promise to include the trans community “when it comes to reproductive justice in America” and Inslee emphasized the importance of addressing climate change, his signature issue.

“Finally I think there’s a growing realization [among candidates] that this is actually where the American mainstream is,” Daily Kos founder Markos Moulitsas told TIME on Saturday. “They’re all one-upping themselves trying to prove that they are with the party base on all of these key issues, and we need a candidate that reflects those values because we need everybody engaged, not just because of the White House … but we need to win the Senate, and that’s a really tough map … we have to keep the House, we have to keep governorships and state legislatures … so many things are on the line this election.”

The influence of progressive activists like those at Netroots Nation can be seen even in the 2020 candidates who weren’t on stage, from the broader support for Medicare for All, more vocal support for reproductive rights and support for including undocumented immigrants in government health insurance programs.

It’s clear that the energy here was strong, with more than 4,000 registered attendees making it the largest gathering since Netroots Nation began. The crowd was energized as well, as when California Rep. Barbara Lee, who drew applause when she talked about Democrats winning back the Senate and electing a Democratic President, “whomever she may be.” (Lee has endorsed a fellow Californian, Sen. Kamala Harris.)

Attendees at Netroots Nations had sessions available to them on how to expand their movements, the importance of winning elections on the state level and how to use new technology while campaigning. In the morning, yoga was available, and scheduled after-hours entertainment included trivia. The primary hovered over the conference: people wore T-shirts and buttons for candidates they liked, and there was even a poll being conducted for who would be the next candidate to drop out.

“To have several of them really taking up the mantle of the progressive cause, that’s new. That’s new for me, and I’ve been in politics a long time,” Aimee Allison, found of She the People, told TIME about the presidential candidates.

While Vermont Sen. Bernie Sanders was not in attendance, his presence was felt. Many people here in Philadelphia for the conference felt that he’d opened the gates in his 2016 bid for other candidates in this cycle to be unapologetically progressive.

“Finally things that people were saying that Bernie was way out on the fringe last time, now they’re fighting over who is closer to his message,” said Hillary Keyes, an activist from Boca Raton, Fla., a Sanders supporter who wore a lanyard strung with Sanders buttons, earrings with his face on them, and a manicure that read “BERN” across the nails with his glasses on the thumbnail.

There was also a widely held sentiment among attendees that the official Democratic Party was not progressive enough and that they’d moved beyond it. And several people were also critical of what they called the “mythical” centrist voter, and argued that progressive values don’t have to mean choosing between the base and appealing to voters more broadly.

Democratic Sen. Sherrod Brown of Ohio, who passed on a presidential run, addressed the audience on Saturday and argued that it’s not a matter of choosing between standing for progressive ideas and winning elections. “That is a false choice. The electibility myth is in fact a myth,” Brown said.

And while the argument for a liberal Democratic Party was in full display at Netroots, in the broader Democratic electorate, there is still an open debate over what is the path forward to defeating Trump. Candidates such as former Vice President Joe Biden, Minnesota Sen. Amy Klobuchar and former Maryland Rep. John Delaney are trying to carve out a centrist path to the nomination.

But it’s clear that in the primary, the progressives are the voices that are being heard loudest.

“It’s a microcosm of the fact that the left wing is flexing its muscles a little more in the political space,” said Michael Piel, a self-described progressive Washington resident who attended the conference. “It’s changed the debate in a lot of ways where moderate positions which used to be seen as the smarter way to go are being somewhat rejected by people right now, and you can feel that in this conference for sure.

“I want the strong progressive voices to be a central part of the party and part of the movement, but politics is always the art of the possible, and I don’t see a way where a lot of the things we talk about here get done without being able to articulate how to work with other people.” 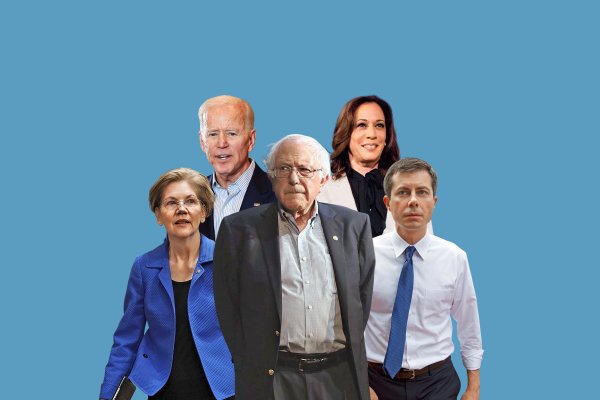 I've Helped Presidential Candidates Prepare for Debates. Here's What I'd Advise This Year's Contenders.
Next Up: Editor's Pick