Brad Pitt has been working in Hollywood for a long time. According to IMDB.com his first role was an uncredited part as a beach bum in Hunk in 1987, followed by roles in Growing Pains and Glory Days before his breakout role in Thelma & Louise in 1991. This is all to say that he has a great deal of experience on the media circuit, making the rounds of interviews, photo shoots, and press conferences that come with promoting each of his new films. After so many years, he feels very comfortable around the media and has no qualms about goofing around on set and shaking up his co-star’s photo shoots.

Case in point, at a recent photo shoot for his forthcoming film, Quentin Tarantino’s Once Upon A Time in Hollywood, photos have come out showing Pitt hilariously photobombing his co-star, Margot Robbie. In the images, it’s clear that Robbie is ready for her close up, but as the photographer snaps off some frames, Pitt comes leaping through, looking very spry as his disrupts the shoot. For her part, Robbie didn’t seem to mind the disruption as she can bee seen hamming it up and smiling broadly in the background.

His antics were undoubtedly no surprise to Robbie, as Pitt, along with George Clooney, has a bit of a reputation as a prankster. According to The Telegraph, on the set of Ocean’s Twelve, Pitt sent a memo to the crew suggesting that they never make eye contact with Clooney and if they did speak to him, to only call him by his character name, Danny Ocean. Don’t worry, Clooney got his revenge, by plastering Pitt’s car with bumper stickers that Pitt would probably not have chosen. 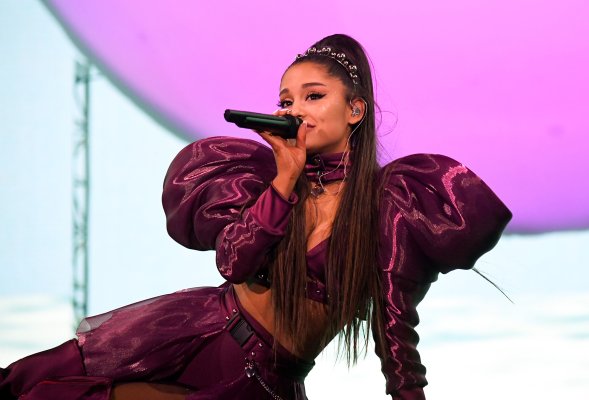 The Real Star of Ariana Grande’s Vogue Cover Shoot Was Her Stylish Dog
Next Up: Editor's Pick