The NBA Is Officially Ridiculous

Russell Westbrook of the Oklahoma City Thunder goes up for a shot defended by James Harden of the Houston Rockets in Houston, TX on Feb. 9, 2019.
Tim Warner—Getty Images
By Sean Gregory

All hail pro basketball, the year-round usurper of news.

The latest NBA off-season stunner dropped on what was supposed to be a quiet Thursday sports night during baseball’s All-Star break (only one game, between the Houston Astros and the Texas Rangers, was on the schedule. Who won? Who cares?) ESPN’s Adrian Wojnarowski broke the news that 2017 NBA MVP Russell Westbrook, of the Oklahoma City Thunder, was being traded to the Houston Rockets, where he’ll pair up with 2018 NBA MVP James Harden to form the latest NBA super-team, in Texas.

This summer’s free agency has created four new NBA power tandems, at least on paper: Kevin Durant and Kyrie Irving, lately of the Golden State Warriors and Boston Celtics, respectively, joined forces on the Brooklyn Nets. (Though Brooklyn will have to exercise some slight patience: Durant, who injured his Achilles tendon in the NBA Finals, likely won’t play next season.) Anthony Davis, the game-changing big man from the New Orleans Pelicans, finally forced his way to the Los Angles Lakers via trade: He and LeBron James will strive to return the Lakers, who’ve become a case study in mismanagement, to championship glory.

NBA Finals MVP Kawhi Leonard ditched Toronto for Southern California. He signed with the Los Angeles Clippers, who also acquired Paul George, an MVP finalist this past season, in a trade to give Leonard his running mate. And now the Rockets, with Westbrook and Harden. Not too long ago, the teams like the Boston Celtics (Ray Allen, Kevin Garnett, Paul Pierce), the Miami Heat (LeBron James, Dwyane Wade, Chris Bosh) and the Golden State Warriors (Stephen Curry, Kevin Durant, Klay Thompson) formed “Big Threes” via trades and free agency signing to acquire NBA titles.

Consider the state of the NBA just seven days ago. Way back then, fans eagerly awaited Leonard’s decision on his future; reports indicated that he’d either sign a deal to stay in Toronto or join James and Davis with the Lakers. No one anticipated what came next: On Saturday morning in the eastern U.S., fans woke up to the news that Leonard not only signed with the Los Angeles Clippers, but George, who still had two years left on his contract with the Oklahoma City Thunder but demanded a trade to the Clippers, was coming with him. The Thunder received a slew of draft picks in the trade, and it quickly became clear that another domino would fall: Oklahoma City would try to move Westbrook, the first player since Oscar Robertson to average a triple double — double digits in points, rebounds, and assists — in a season, a feat he’s pulled off for three straight years running. The Thunder were ready to start over.

Places like Miami seemed like a destination for Westbrook. But the Rockets, already a championship contender simply because of the presence of Harden, the NBA’s scoring leader the last two seasons, swooped in by pawning off Chris Paul’s contract, which has three years and $124 million remaining on it, on OKC. The Thunder acquired even more future first round draft picks in the deal with Houston. The Rockets become even more dangerous with Westbrook, who played with Harden from 2009-2012, when they were both ascendant young players with the Thunder.

Some hoops executives have griped that the NBA suffers from a bout of coastal elitism. Players have engineered deals to team up in the Bay Area and Southern California, as well as in New York and Miami. That complaint doesn’t really hold, with all the stars now in Texas (though Houston is the fourth largest city in the U.S.; players seem to favor a big market, whether it’s on the Atlantic or Pacific coast, or southeast Texas).

Small-market NBA squads aren’t the only entities feeling the effects of basketball’s seismic shifts. At this week’s baseball All-Star game in Cleveland, even the world’s best baseball players recognized that all the dizzying NBA player movement was overshadowing their sport. “Everything that happens now, it’s a headline,” MLB Players Association executive director Tony Clark said in the Wall Street Journal. “I would love our guys to find themselves in the same place.”

For many sports fans, Wojnarowski was more important than any All-Star player on the field in Cleveland. Because no one there was going to tell you where Russell Westbrook got traded.

This onslaught of chess moves is a product of unprecedented player empowerment in the NBA. Players like George and Davis, under contract in what they considered less than ideal circumstances, leveraged their clout to force their way to Los Angeles. At the NBA Summer League in Las Vegas this week, commissioner Adam Silver called the habit of superstars forcing trades “disheartening.” But such power plays won’t fade any time soon. And the NBA ultimately benefits from all the chatter — and anticipation. The first Lakers-Clippers game, for example, is going to be a circus. Which one of these tandems, if any, will hold the championship trophy?

We just have to wait for one little thing: the teams to play the actual games. That’s not happening until October, leaving plenty of time for Wojranowski to deliver some other stunner. And to steal the oxygen from other sports, once again. 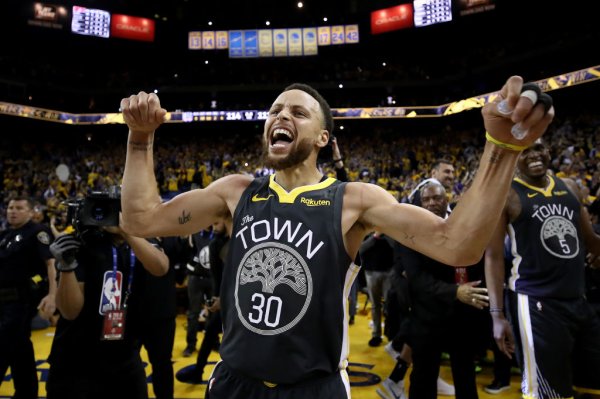 The Golden State Warriors Revolutionized the NBA. Now They Plan to Keep the Dynasty Dream Alive
Next Up: Editor's Pick