Witty Banter Carries Sword of Trust to the Hilt

Lynn Shelton, director of movies like Laggies and Your Sister’s Sister, has a knack for locating the approaching turns in characters’ lives; then she stands back, observing quietly but astutely as they figure out how to round them. In her wily, laid-back comedy Sword of Trust, a young woman, Jillian Bell’s Cynthia, inherits a Civil War–era sword from her grandfather, an item with a possibly unsavory past that she has no desire to own. With her high-strung partner Mary (Michaela Watkins), she heads off to a pawn shop. The mildly cantankerous owner, Mel (played by comedian and podcaster Marc Maron), hems and haws as he examines the hoary old weapon. He passes on it–only to have his hapless shop assistant Nathaniel (Jon Bass) inform him, after some random Googling, that this grim artifact could fetch some $40,000 from a redneck cult looking to prove that the South actually won the war.

Mel and the two women, with Nathaniel tagging along, broker a deal to sell the sword together and split the profits, though their own personal histories will end up having much more meaning than the strange antique in their possession. That’s because Shelton–who co-wrote the script with Mike O’Brien–cares more about interpersonal dynamics than any silly old sword, especially one with racist connotations.

The movie’s dazzling centerpiece takes place in, of all places, the back of a truck: The foursome have been stuck there by a skinny, enigmatic emissary named Hog Jaws (Toby Huss, half menacing, half amusing), assigned to transport them and their “high-quality prover item,” as one character calls it, from Alabama to Tennessee, where the potential buyer awaits. Inside this stark, carpeted box, Mary and Cynthia spill their secrets, about wanting a child but hoping to pursue some of their dreams first. (Cynthia wants to open an escape room.) And with slow-burning conviction, Mel tells the story of an old flame (played, in a brief but potent appearance, by Shelton herself), a woman he had to abandon after she was undone by addiction, though he’s now realizing that she may genuinely need his help. Sword of Trust is a modest, wobbly picture, and it falls apart as it rambles toward its ending. Yet it never feels like a waste of time. Sometimes being invited along for the ride is reward enough. 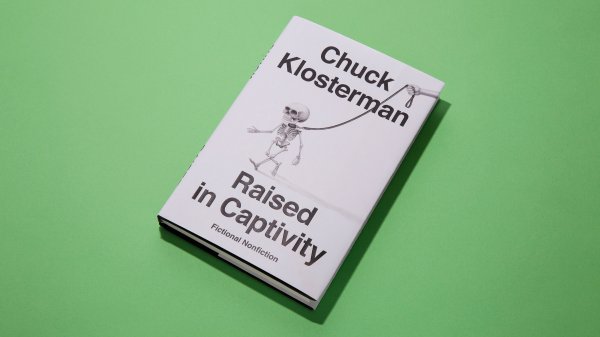 A Puma in the Airplane Bathroom, a Wikipedia Page Deleter and More in Chuck Klosterman's Latest
Next Up: Editor's Pick