Barry Weakens to a Tropical Depression as It Moves Through the South. Here's the Latest on Its Path and Forecast

Barry has been downgraded from a tropical storm to a tropical depression as it continues to move through Louisiana, into Texas and Arkansas, causing storm surge, heavy rain and wind.

The storm made landfall early Saturday afternoon near Intracoastal City, La., which is about 100 miles west of New Orleans. It currently has sustained winds of 35 miles per hour. It was briefly a Category 1 hurricane on Saturday morning, but weakened and is now a tropical depression. It continues to drench the South in heavy rains and dangerous storm surge.

The National Hurricane Center has discontinued the hurricane watch for the Louisiana coast west of Intracoastal City and the tropical storm watch has been discontinued east of the Mississippi River. However, as of Sunday morning tornadoes still remain possible in portions of Louisiana, Mississippi, western Alabama and eastern Arkansas.

Experts warn that the water the storm brings is potentially more dangerous than the wind alone. About 3 to 6 additional inches of rain are expected, with as much as 10 inches possible.

What path is the storm expected to take?

Barry is currently heading north at around 9 mph and is expected to continue in that direction through Monday.

Barry is expected to produce up to 6 inches of rain across portions of the lower Mississippi Valley through early next week, with some areas receiving up to 10 inches.

As of Sunday evening, all tropical storm warnings have been discontinued.

“You have to be careful with that,” he emphasized. “[In] the last three years 83% of fatalities [from] these tropical systems has been inland flooding. Listen to local officials, when you start getting these road closures, don’t move the barricades… don’t drive into that water. Let’s try to prevent these fatalities.”

President Donald Trump has declared a federal emergency in Louisiana, which authorizes the Department of Homeland Security and Federal Emergency Management Agency to coordinate all disaster relief efforts, ahead of Barry’s expected landfall. It also gives the state access to federal emergency resources ahead of the storm’s approach.

The Mississippi River at New Orleans is forecast to crest at 19 feet Saturday evening, the highest level in nearly 70 years, according to the National Weather Service. As the storm nears, it could worsen ongoing flooding in New Orleans and the surrounding area.

The National Hurricane Center predicted storm surges of up to 5 feet at Lake Pontchartrain outside New Orleans and issued hurricane watches and warnings along Louisiana’s Gulf Coast.

What are the flooding risks?

There are 295 levee systems constructed throughout Louisiana, protecting much of the coastline, New Orleans, Lake Pontchartrain and north along the Mississippi River, forming 3,179 miles of levees.

After levees failed to protect New Orlean’s during Hurricane Katrina in 2005, billions of dollars was spent to make adjustments like adding height, planting vegetation as reinforcement and adding barriers to Lake Pontchartrain, along which every flood gate has been closed. Tropical Storm Barry will be the first test to see if the levee adjustments hold up.

A cyclist rides past a flood gate that has been closed to keep the Mississippi River from inundating the French Quarter with storm surge from Hurricane Barry on July 12, 2019 in New Orleans, Louisiana.
Scott Olson—Getty Images

According to the Associated Press, Gov. Edward is not worried about rivers rising higher than the levees, and has said the system is “stronger than ever.” But said changes in the storm’s path and intensity could change that, and “you never know what Mother Nature is going to serve until she has served it,” he cautioned Friday.

What is predicted in New Orleans?

New Orleans, which has already been drenched by up to 9 inches of rain from a previous storm, faces more heavy rainfall and potential flash flooding.

The National Weather Service had previously issued a flood warning and a tropical storm warning for the city, as well as a storm surge watch and a flash flood watch. Residents prepared for the worst, as the forecast called for several rounds of showers and storms through the weekend that were expected to bring 10 to 20 inches of rain, which could lead to flash flooding.

The National Hurricane Center said the rapid rise in small streams and creeks in the area will result in flooding on some rivers and rapid ponding of water that may overwhelm local drainage capacities due to excessive rainfall. The AP also reports Mayor Cantrell has said the city’s pumping system may not be able to drain water faster than the rain pours down.

As of early Sunday, watches and warnings in the New Orleans area have been cancelled, as the storm center moved to about 190 miles northwest of the city. Forecasters still warned residents of potential life-threatening flooding impacts from the rain.

How are people in the storm’s path getting ready?

“No one should take this storm lightly,” Gov. Edwards told Louisianans in a press conference earlier this week. “This is going to be a significant weather event, and if you haven’t already done so, the time to prepare is now,” he added on Twitter.

“As we know all too well in Louisiana, low intensity does not necessarily mean low impact. Now is the time to check your emergency supplies and get a game plan for your family and pets. I urge the public to continue monitoring local media for weather developments and follow the directions of local officials,” Edwards said in a statement. An emergency order is currently scheduled to be in place until Aug. 8.

State agencies have also announced that they’re mobilizing to prepare for the storm.

The Costal Protection and Restoration Authority said on Twitter that it is coordinating the closure of the state’s floodgates. The Louisiana Department of Transportation and Development also made various preparations for the storm, clearing out debris from ditches and staging barricades near roadways.

Various schools, including Loyola University New Orleans and Tulane University, are closing during the storm.

President Donald Trump approved a federal declaration of emergency Thursday night for Louisiana, which authorizes the Department of Homeland Security and Federal Emergency Management Agency to coordinate all disaster relief efforts, ahead of Barry’s expected landfall.

Airbnb is doing their part to help those displaced by the storm through their “Open Homes Program.” As of Friday afternoon there are currently 82 Airbnb host in the gulf coast area that are opening up their homes for free until July 31 for displaced neighbors and relief workers deployed to help. 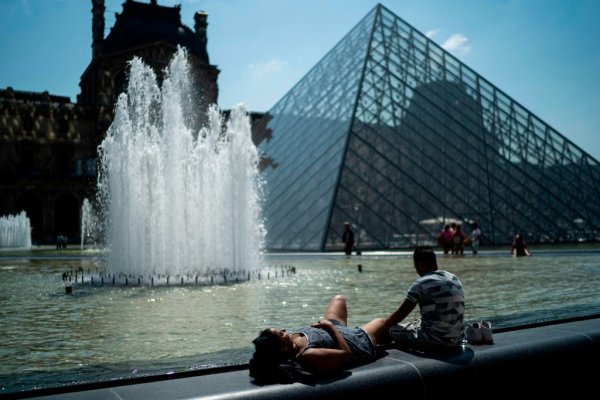 An 'Unprecedented' Early Summer Heatwave Grips Europe as Scientists Warn More Are on the Way
Next Up: Editor's Pick