From Satellites to the Moon and Mars, China Is Quickly Becoming a Space Superpower

Nestled among the crimson dunes of China’s Gobi Desert, a warren of domes and squat white buildings rises from the parched earth. Inside is a research and educational facility for budding astronauts — and the latest manifestation of Beijing’s bid to position itself as a leading space power.

“Mars Base 1,” built by private Chinese company C-Space, is like a space station on Earth, boasting an airlock, greenhouse, gymnasium, living quarters and control room. Solar-powered buggies and lunar probes scour the red dust landscape of northeastern Gansu province, whose barren expanses bear an eerie resemblance to the Red Planet, which China is planning to visit next year.

Visitors experience what life is like on a real space mission, from rearing crops under an ultraviolet glow in soilless science labs to clambering around in bulky space suits. Barley worms are even grown for protein in lieu of rearing animals. “I’m very excited to see this place,” says student Zhang Huan, 12, who’s touring the facility. “If China can be the first to land humans on Mars, it will inspire everyone throughout the country.”

It was perhaps only a matter of time before the Celestial Empire reached for the stars. China’s government has made conquering space a key strategic priority, with the nation’s reported $8 billion space budget second only to the U.S., according to the Space Foundation, an American non-profit.

Chinese scientists were early pioneers of rudimentary rockets back in the year 900, though only launched its first Long March rocket in 1970 on the back of Soviet technology, sending a human into space in 2003. Now, it’s making fast progress. In January, China broke new ground by landing its Chang’e 4 lunar lander on the far side of the moon, which, due to the moon’s synchronous, tidally locked rotation, remains constantly hidden from Earth. There, China’s Jade Rabbit 2 rover was able to transmit data back to Earth via a satellite previously deployed around the moon to establish a radio link. In another first, a cotton seed was germinated onboard the Chang’e 4, which is named after China’s mythical moon goddess. After the mission, Chinese President Xi Jinping praised the “outstanding feats” that had “set a model for the whole [Chinese Communist] Party, the whole armed forces and people of all ethnic groups in China.”

Such backing from the top underscores the scale of China’s ambitions. China already has the largest filled-aperture radio telescope in the world, which measures just over 1,640 feet across. Other than visiting Mars, China plans to send probes to asteroids, Jupiter and even Uranus. It also aims to build a scientific research station in the moon’s southern polar region, as well as establish its own sophisticated large-scale space station within 10 years. “They have a strategic, long-term set of goals and work deliberately and systematically to achieve those goals,” says Kathy Laurini, who served as NASA’s senior advisor for Exploration and Space Operations, among other roles, during 36 years with the American space agency.

Satellite launches are a priority, too. China had 38 launches last year, more than any other country, as it attempts to catch up with the West’s satellite infrastructure. And last month, China launched a rocket from a mobile platform in the Yellow Sea for the first time, sending five commercial satellites and two others containing experimental technology into orbit. The feat meant China is only the third country after the U.S. and Russia to master sea launches.

The speed at which China is surpassing each technological hurdle spotlights how the Beijing government views space as vital for boosting the economy and promoting high-end industry and spill-off technologies. “They see space as a very important driver for growth and competitiveness going forward,” says Andrew Jones, a journalist specializing in China’s space program.

Still, space is never smooth sailing. The past two launch attempts of China’s Long March 5 rocket needed to be aborted because of oxygen supply malfunctions, according to officials Unless those glitches are quickly ironed out, China may loose the 2020 launch window for its Mars mission. (The best time for Mars missions come around every 26 months, when Earth is closest to the Red Planet.) Of course, problems are not uncommon at the cutting edge. After all, NASA’s InSight mission to Mars missed its own 2016 launch window, while ExoMars, another Mars mission, missed its opportunity in 2018. “It happens,” says Laurini. “Mars is hard.”

Less challenging, though potentially more rewarding, is China’s commercial space industry. A bevy of private firms are launching satellites and exploring other money-making applications for space travel. As launches in China are only permissible at military sites, these private entities must work closely with and be green-lit by the state. China, like the U.S. and Russia, now has a private company capable of independently developing liquid-fueled engines, which are reusable and thus more cost-effective than simpler solid-fuel alternatives.

The commercial space industry has been transformed in recent years by the explosion of firms backed by celebrity entrepreneurs, including Jeff Bezos’ Blue Origin, Richard Branson’s Virgin Galactic and Elon Musk’s SpaceX — the latter alone boasting some 65% of the entire $3 billion global satellite launch market in 2018. The number of satellites in space increased 50% from 2013 to 2017 to 1,738, according to a Satellite Industry Association report cited by Bloomberg, with Blue Origin and Virgin Galactic eagerly eyeing expansion into space tourism.

China’s State Council first mentioned the development of a private space industry in 2014, pledging to “encourage private capital’s participation in China’s construction of civilian space infrastructure.” Since then, military-civilian partnerships have flourished, and private firms have been allowed to launch from military bases.

There’s every chance that China, as the ultimate disruptor, will do to the commercial space industry what it has already managed with manufacturing: cut costs, boost efficiency and storm into a lead. Launching miniature satellites, which typically weigh less than 220 lbs., will become a $15 billion industry by 2027, according to Euroconsult, a space industry consulting firm.

One firm looking to capitalize is Beijing-based startup i-Space, which is preparing for its third launch in coming weeks. Like most of the $500 million-valued firm’s employees, CEO Jingqi Cai came from China’s state space industry. She sees no limit to what the Chinese commercial space industry can achieve. “I don’t know any country in the world which can do things as fast as in China,” says Cai.

Still, the ability of China’s commercial space firms to compete is curtailed by strict International Traffic in Arms Regulations (ITAR) rules, which prohibit satellites containing American components from being launched by China. In response, China is offering holistic “turnkey” solutions: building U.S. component-free satellites for clients, handling the launch and offering ground station support. Although China’s share of the commercial market remains small at around 5-10%, say analysts, it is growing with launch of communications and surveillance satellites for nations like Brazil, Venezuela, Laos, Nigeria and Algeria. In addition, European satellite manufacturers have begun designing devices labeled as “ITAR-free” for this reason.

The likelihood is that China’s space exploration and commercial programs will advance in tandem. For i-Space chief engineer Yi Wei, launching satellites is simple compared to his previous job designing escape pods for China’s state-run human space program. “In comparison, I feel no pressure here at all,” he says.

Next, i-Space, like many other private Chinese firms, has its eyes on conquering space tourism. Although admittedly far behind U.S. competitors like SpaceX, Jingqi says her firm plans to launch manned spaceflights within five years. Once they do, with prices no doubt lower than their American and European competitors, Jingqi plans to take her daughter up on the firm’s maiden flight. Still, she laughs: “I really hope I can get a discount!”

—With reporting and video by Zhang Chi/Gansu 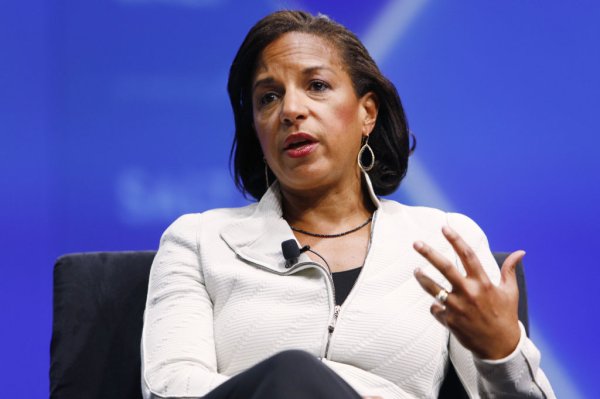 'You Are a Racist Disgrace.' Former National Security Advisor Susan Rice Chides 'Ignorant' Diplomat on Twitter
Next Up: Editor's Pick