A man was swept over Niagara Falls early Tuesday morning, and survived.

Niagara Parks Police in Ontario, Canada, responded to a man they described as being “in crisis” in the early hours of the morning, only to find him climbing over the retaining wall, a stone barrier that separates the waterfall from its visitors. The man was quickly swept over Horseshoe Falls, but was later found sitting on rocks in the Lower Niagara River at the falls’ base without any life-threatening injuries, according to tweets from the police department. He was taken to the hospital for treatment.

The man’s identity has not been released. Reached for a statement, Niagara Parks Police told TIME that they would not be releasing any more information.

Horseshoe Falls, which lies between the U.S.-Canada border, is the largest of the three waterfalls that make up Niagara, standing at 167 ft. (or roughly 15.5 stories) high, with upstream rapids that reach 25mph. The whirlpool rapids at the bottom of the fall can reach 30mph.

Niagara Falls Mayor Jim Diodati told The Buffalo News he thinks that the record-setting high water levels from the nearby lakes might have helped the man survive his fall. Niagara Falls is responsible for draining Lake Erie, and into Lake Ontario; The Washington Post reports that many areas in the Great Lakes region have experienced 150 to 200% of their yearly precipitation rates this year, causing flooding.

The incident occurred on the 59th anniversary of 7-year-old Roger Woodward surviving a fall from Horseshoe Falls with only a lifejacket on. with his sister and a family friend, Woodward was involved in a boating accident just upstream from the falls on July 9, 1960, and he was swept over. His sister was able to be rescued before she went over, but their family friend died. There are only a few other known survivors of Niagara Falls who went over without any protection including an unidentified man in 2012, a Canadian man in 2009, and Kirk Jones in 2003. Jones, whose body was found in Niagara River in 2017, is thought to have died after attempting to go over the falls again in an inflatable ball. 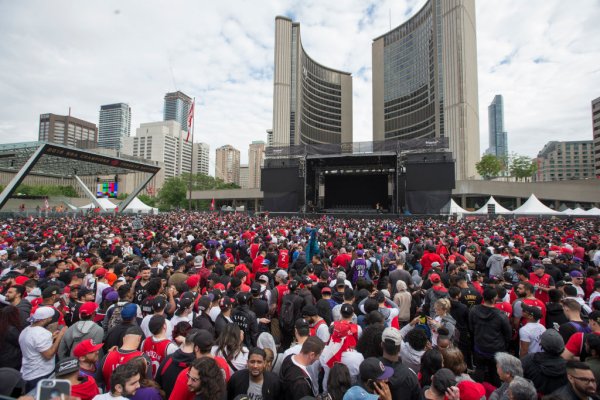 4 People Shot During Raptors Parade in Toronto
Next Up: Editor's Pick