With a half-Earth in the background, the Lunar Module ascent stage with Astronauts Neil Armstrong and Edwin Aldrin Jr. approaches for a rendezvous with the Apollo Command Module manned by Michael Collins, during the Apollo 11 mission in 1969.
NASA/Getty Images
By Oliver Morton

As the ancient planet Theia struck its glancing blow into Tellus, the planet that would become Earth, part of its mantle sloughed off into that of the planet it had struck, but some drove on past, pushing a layer of Tellurian mantle ahead of it like mud on the blade of a bulldozer. Still traveling with more than half of Theia’s original speed, blade and burden rose together back out into space. Much fell back. Much did not. Some escaped completely to form a short-lived ring around the Sun. But a lot stayed in orbit around the wrecked, reforming planet below. It was from that fiery orbital aftermath that the Moon was to grow.

What could have led to a scenario so extravagant becoming the most widely accepted account of the Moon’s origin — albeit one which still has some big questions to answer?

Its rise, which dates back to the 1970s and 1980s, was mostly due to the knowledge brought back from Apollo. Oxygen comes in three different isotopes. Apollo samples quickly showed that the ratios between these three isotopes in rocks from the Moon were very like those in rocks from the Earth — and unlike those of asteroids or of rocks from Mars.

Identical isotope ratios seemed to mean that the rocks of the Earth and Moon came from the same source. Analysis of the Apollo samples also revealed that moonrocks were very low in volatile compounds — water, carbon monoxide, nitrogen, sulphur and other light elements. Data from the seismographs the astronauts installed on the surface and from measurements of the Moon’s gravity field made in orbit showed that it had only a very small iron core, if it has one at all. But if it formed from the same stuff as the Earth had formed — and thus presumably by the same mechanism — how could that be? Why would it have so few of the volatiles with which the Earth was well stocked? Why had it not formed a big strapping core like the Earth’s? Mars and Venus have done so. Mercury, the smallest but densest planet, has a core that takes up more than half its volume.

In short, in terms of its make-up, the Moon didn’t really look like a planet in its own right. It looked like a dollop of the Earth’s mantle which had somehow scooped itself out and placed itself into orbit, no core attached.

The idea of such a fission was first proposed by George Darwin, Charles Darwin’s son. Darwin fils was interested in the drag on the Earth’s rotation caused by the tidal bulges raised by the Moon. Turning beneath a tidal bulge that stays put, driving tides in and out of shallow seas and across great oceans, means that the Earth continually loses energy to friction — a loss which slows the Earth’s rotation and lengthens the leash on which it holds the Moon.

This results from the conservation of angular momentum — a property of bodies, or systems, which depends on how their mass is distributed and how fast they are spinning. Move mass closer to something’s spin axis and, if angular momentum is conserved, it will spin faster; move it farther out and things will slow down.

This principle applies to the Earth-Moon system, tied together as it is by gravity. When the skater’s arm extends, her body spins more slowly. The energy dissipated by the tides thus means both that the Earth’s days are getting longer and that the Moon must have been closer in the past. By calculating the rate of its recession, Darwin found that, some 54m years ago, the two bodies would have been one. From this he derived the idea of a single body, spinning very fast, splitting into two. Long before it was explained by plate tectonics, devotees of Darwin’s idea claimed that the great quasi-circular hole currently filled by the waters of the Pacific marked the divot from which the Moon had been thus ejected. But no one could really explain why the planet would have come asunder in the first place.

The giant-impact theory, as the story of Tellus and Theia is known, seemed to provide an extraterrestrial precipitating event for the Moon’s recession as well as explain everything else that other theories could not. It got a chunk of Earthish mantle, with its telltale oxygen-isotope ratios, into orbit without an iron core. It stretched out and melted that chunk, baking the volatiles out so as to ensure a desiccated end product. It even explained why the Earth-Moon system had a high angular momentum in the first place. Theia’s off-center impact would have applied a massive torque to Tellus, producing a planet that spun very rapidly and the Moon that would, over billions of years of tidal braking, slow it back down.

Put forth after Apollo by, among others, Bill Hartmann — the man who first appreciated the ubiquity of ringed impact basins on the Moon’s surface — and Don Davis, who helped guide Apollo 13 safely back to Earth, the giant-impact theory gained widespread credence in the mid-1980s. Early supercomputer models, some using code written to explore the effects of nuclear weapons, were able to sketch out what might have happened, an endeavor which seemed both sexy and confirmatory. But at the heart of the theory’s success were the twin virtues of a great deal of explanatory power and no serious rivals. The idea of the Moon happening to pass by and being pulled into the Earth’s orbit — the capture hypothesis — could not be made to work, then or now, without immense special pleading. Nor did it explain the similarities between the bodies. Co-accretion, in which the two simply formed close by one another, and this from similar source materials, explained the similarities, but not the differences — the Moon’s lack of volatiles and core. Nor did it explain where all that angular momentum came from. The fission hypothesis lacked any sort of mechanism by which one planet might split in two.

What is more, the giant-impact theory helped explain one of the fundamental discoveries made by the Apollo missions. Whereas the dark plains of the maria were made of basalt, the brighter highlands were made of anorthosite, a rock composed mostly of calcium plagioclase, a mineral from the family called feldspars which are most familiar, I suspect, as the light-colored non-quartz bits of granite kitchen worktops. If you take hot magma made from the Earth’s mantle and let it cool under lowish pressures, calcium plagioclase is the one of the first minerals to crystallize out as a solid.

If formed from the orbital debris of a giant impact, the Moon would have started life covered by an ocean of magma — a hot layer of liquid rock hundreds of kilometers deep. (The post-impact Earth would have had such a magma ocean, too, but maybe only a tenth of the depth and possibly not over all of its surface.) As the ocean cooled minerals began to crystallize out at depth, the first of them plagioclases. Being lighter than the surrounding magma, they would have floated to the top. The magma ocean would thus have grown a crust composed mostly of calcium plagioclase.

Since the Moon, small and quick to cool, never developed any mechanism for recycling its crust, this primordial crust stayed put, except when blasted away by impacts or covered by later, darker basalts. One of the samples of almost-entirely-plagioclase highland rock brought back by the Apollo astronauts was 4.46bn years old — less than 100m years younger than the Earth and the Moon.

For all its explanatory value — not to mention drama — the giant-impact theory has run into problems over the past decade. Few are ready to abandon it, but there is no widespread consensus on how to fix it. And as details have proved troublesome, the general gist has become oddly more acceptable. The discovery of thousands of planets beyond the solar system in the past decade has stretched scientists’ sense of what a planet can be. Some are so hot as to have their atmospheres permanently swollen, some locked so close to their star that one side is always almost melting. One star has a ring of hot rock around it that some have seen as the short-lived by-product of a collision quite as powerful as that of Theia and Tellus. The universe offers a far richer array of planetary possibilities than the bimodal distribution of small rocky inner and large gassy outer objects seen around the Sun today.

Excerpted from The Moon: A History for the Future by Oliver Morton. Copyright © 2019. Available from Economist Books, an imprint of Hachette Book Group, Inc. 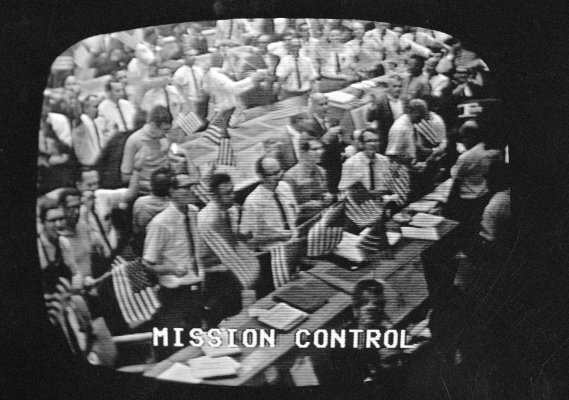 Inside Mission Control During Apollo 11 Moon Landing
Next Up: Editor's Pick