President Trump made a bit of a historical blunder during his Fourth of July “Salute to America” speech Thursday when he said that the Continental Army “took over the airports” from the British during the American Revolutionary War in the 1770s.

During his hour-long speech at the grounds of Lincoln Memorial in Washington D.C., Trump stayed largely off politics.

Trump praised the Americans’ military efforts in the war against Great Britain. “Our army manned the air, it rammed the ramparts, it took over the airports, it did everything it had to do, and at Fort McHenry, under the rockets’ red glare, it had nothing but victory,” he said.

Of course, as many viewers noted, airports––and military airplanes––are a 20th century invention. The first powered flight of an airplane was officially attributed to the Wright brothers, who accomplished their feat in 1903. Trump also praised the Wright brothers earlier in his Independence Day speech.

Other observant listeners picked up on a second historical error in the speech. Trump’s reference to Fort McHenry and “rockets’ red glare”––the Battle of Baltimore at which the words to the “Star-Spangled Banner” were written––took place during the War of 1812, not the Revolutionary War.

Trump explained his statements outside the White House on Friday by noting that the teleprompter he was using to deliver his speech had experienced some technical difficulties. “The teleprompter did go out and it was actually hard to look at anyway because there was rain all over it but despite the rain it was just a fantastic evening,” Trump told reporters.

Numerous memes have popped up on the internet poking fun at the President’s airport comment. In one such meme, the famous painting of Washington crossing the Delaware is superimposed over a photo of an airport baggage claim area titled “The Battle of Baggage Claim (1776).” In another, above a sketch of Paul Revere’s ride is written “One if by land/Two if by sea/ Three if arriving at Terminal C.”

The President has made several history-related errors during his time in office. In 2017, he argued that Andrew Jackson could have prevented the Civil War from happening, when Jackson actually died 16 years before the war started. Referring to the War of 1812 during a tense 2018 phone call with Canadian Prime Minister Justin Trudeau, Trump reportedly said “Didn’t you guys burn down the White House?” However, it was British troops that burned down the White House during the War of 1812, not Canadian forces. 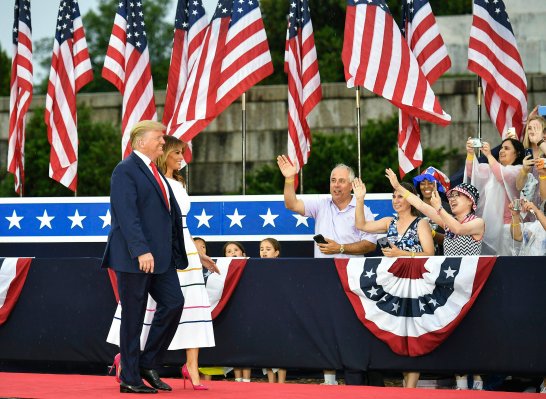