A British Royal Navy ship (L) patrols near supertanker Grace 1 suspected of carrying crude oil to Syria in violation of EU sanctions after it was detained off the coast of Gibraltar on July 4, 2019.
JORGE GUERRERO—AFP/Getty Images
By Verity Ratcliffe, Julian Lee and Arsalan Shahla / Bloomberg

(Bloomberg) — British special forces seized a supertanker off Gibraltar carrying Iranian oil to Syria in violation of European and U.S. sanctions against the war-torn country. Iran responded by declaring the action illegal and summoning the British ambassador to the Foreign Ministry in Tehran to explain the ship’s arrest.

The diplomatic row heightened tensions just as the U.K., France and Germany try to keep the Islamic Republic from walking away from an international deal to prevent Iran developing nuclear weapons. The U.S. quit the pact a year ago, prompting Tehran to make good on an earlier warning that it would exceed the limits on its stockpile of enriched uranium.

While Syrians will feel the immediate impact of halting the crucial oil shipment to the country, the arrested vessel shows the difficulty Iran faces in finding outlets for its crude as President Donald Trump’s administration ramps up sanctions. Iran’s oil production has dropped by 1.5 million barrel a day over the past year, poleaxing the Islamic Republic’s economy.

The Grace 1, able to ship 2 million barrels of crude oil, was intercepted by detachments of Royal Marines and Gibraltarian police, who boarded the tanker from a helicopter and speed boat in the early hours of Thursday morning. The ship is now anchored near Gibraltar, a British overseas territory on Spain’s southern tip that overlooks the strait between the Mediterranean Sea and the Atlantic Ocean.

“We have detained the vessel and its cargo,” said Fabian Picardo, Gibraltar’s chief minister. “This action arose from information giving the Gibraltar government reasonable grounds to believe that the vessel, Grace 1, was acting in breach of European Union sanctions against Syria.”

Gibraltar didn’t say where the crude came from, but ship tracking data compiled by Bloomberg showed the vessel loaded at Iran’s Kharg Island oil terminal in mid-April. Several weeks later, the ship began a journey around the bottom of Africa, passing Cape Town in early June, rather than taking the more direct route through the Suez Canal.

Iran’s decision to lodge a diplomatic complaint shows Tehran isn’t attempting to disavow the cargo’s origin. Seyyed Abbas Mousavi, a spokesman for Iran’s foreign ministry, said on state TV that Britain’s move was “a kind of extraterritorial sanction” that could “escalate tension in the region.”

Britain’s Foreign Office confirmed that its ambassador had been summoned. Earlier in the day, Theresa May’s spokesman had offered London’s full support for Gibraltar’s actions. “We welcome this firm action to enforce EU sanctions against the Syrian regime,” the prime minister’s spokesman, James Slack, told reporters in London. “This sends a clear message that violation of the sanctions is unacceptable.”

The row comes at a difficult time in Anglo-Iranian relations. Last month, London joined Washington in blaming Iran for attacks on two tankers in the Gulf of Oman. The U.K. is also campaigning for the release of Nazanin Zaghari-Ratcliffe, a British woman imprisoned in Iran after being accused of spying.

The Grace 1’s voyage to the Mediterranean was circuitous, providing plenty of time to plan today’s action. The distance from Iran to Syria, sailing around Africa, is about 23,300 kilometers (14,500 miles), compared with just 6,600 kilometers via the Red Sea and Suez Canal. A ship the size of the Grace 1, known as a Very Large Crude Carrier, or VLCC, can’t pass through the canal fully loaded.

VLCCs have the option of transiting the canal by discharging half their cargo, sending the oil through the Sumed Pipeline, and pick it up again in the Mediterranean, but the pipeline’s owners have refused to accept Iranian crude since 2012.

Iran has regularly supplied Syria with crude oil since the country descended into civil war in 2011. Iran backs the government headed by President Bashar Al-Assad, which has been sanctioned for most of this decade due to its bloody crackdown on the country’s civilians. Syria receives Iranian crude despite the embargo. It imported at least 32,000 barrels a day in 2018 and 66,000 in 2017, according to tanker tracking data compiled by Bloomberg.

Gibraltar said Grace 1 was destined for the Baniyas refinery, which is owned by the Syrian government and is subject to both U.S. and EU sanctions. Three of the facility’s underwater oil pipelines were allegedly sabotaged with mines in June, according to Syrian TV, potentially complicating the unloading of cargoes there. 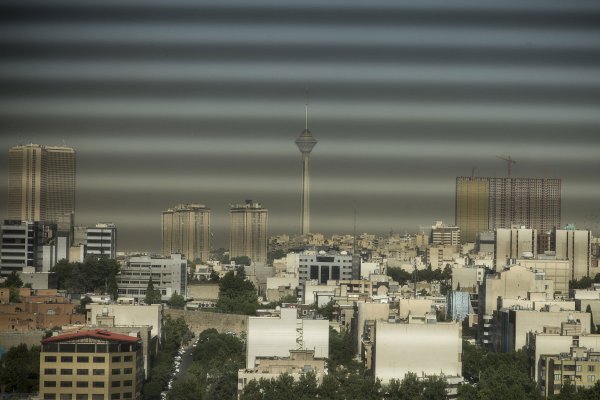 The U.S. and Iran Are Already at War Online
Next Up: Editor's Pick