Who Is Ursula von der Leyen, the First Woman To Become President of the European Commission?

Ursula von der Leyen is the first woman in history to become the E.U.’s Commission President, following a vote in the European Parliament this afternoon.

She is the second woman to be appointed for one of the EU’s top jobs. Christine Lagarde, the managing director of the International Monetary Fund, will replace the Italian Mario Draghi as President of the European Central Bank and will become the first woman in history in the role.

Von der Leyen is a centrist and a loyal ally of Angela Merkel and her nomination was seen as a victory for the German chancellor. She’s less well known internationally than Lagarde and was seen as a surprise nomination. This is her first E.U. position but the role, one of Europe’s most powerful, would put her front and center in trade deals as well as proposing and enforcing E.U. rules.

In her speech taking up the role, she championed gender equality. “We represent half of our population. We want our fair share,” she told MEPs. On climate change, she said the EU’s target of cutting carbon emissions by 40% by 2030 was not enough. It should be 50%, if not 55%, she said.

On Brexit, she said: “I stand ready for a further extension of the [UK] withdrawal date, should more time be required for a good reason.” The UK is scheduled to leave the EU on 31 October.

Who is Ursula von der Leyen?

The 60-year-old gynecologist only started her political career in her early 40s. As well as Germany, she has lived in Belgium, the U.K. and the U.S., and speaks fluent French and English. She alternated between three languages throughout her speech as she set out her agenda.

Van der Leyen has not held an E.U. job before, but Brussels is a very familiar place for her. As the daughter of a European Commissioner (back when the E.U. was the European Economic Community), she was born in the Belgian capital and spent most of her childhood there.

She studied economics at two German universities and at the London School of Economics but never graduated. Instead she went on to study medicine in Hanover, and later earned a masters degree in public health. She lived in California for a few years while her husband, a professor of medicine, joined the faculty at Stanford University.

In 1990 she joined Angela Merkel’s Christian Democratic Union party (CDU). After climbing through the ranks in the regional government of Lower Saxony, she joined the cabinet of Merkel’s first government in 2005 as minister for Family, Seniors, Women and Youth. During that time, Von der Leyen, a mother of seven, improved maternity and paternity pay rights.

She continued to work with the German chancellor throughout her almost 14-year leadership. In 2009 Van der Leyen moved to the Labor Ministry, before becoming the first female defense minister in 2014.

What will her responsibilities be as European Commission president?

Von der Leyen is the bloc’s 13th commission president, a position she will hold for the next five years. The job, one of the most powerful in Europe, involves leading the Union’s most important institution, made up of 28 commissioners, to set the bloc’s policy agenda. As the E.U.’s executive branch, the Commission is sometimes dubbed the civil service, or the government of the E.U.

One of Van der Leyen’s top challenges as commission president will be overseeing Brexit. As a European integrationist she has previously lamented the U.K.’s decision to leave the E.U. In an interview with Berliner Morgenpost last year she said Brexit “is a loss for everyone”.

As the Commission President, Von der Leyen will also represent the Commission at G7 and G20 summits. Much like Merkel, her relationship with Donald Trump is likely to be difficult. In an interview with Der Spiegel last year she implied Trump was intimidated by Merkel because she is a powerful woman. “A woman like Angela Merkel, a globally admired head of government with many years of experience has probably not features in his world view before,” she said.

Her predecessor, the Luxembourg national Jean-Claude Juncker, was able to overcome his differences with Donald Trump, and said he “liked him as a person”.

Is everyone happy with her nomination?

Von der Leyen was a surprise choice for the position. It was the President of France, Emmanuel Macron, who first suggested she lead the Commission, after several other candidates, including Dutch social democrat Franz Timmermans who had appeared to be the favorite, were rejected.

After her nomination on 2 July, Angela Merkel said Von der Leyen had received “strong backing from EU leaders.” Her reputation in Germany, however, is not as good as it is abroad. She has been criticized for her role as defense minister, which she left on Monday, with a member of her own party saying: “It’s good for the army that she is going.”

Former European Parliament president Martin Schulz, criticized Von der Leyen on Twitter, saying she is “the weakest minister in the government,” but that “apparently such a performance suffices to become head of the Commission.” Others opposed her on the grounds that she was not one of the lead candidates who campaigned ahead of the European elections in May. 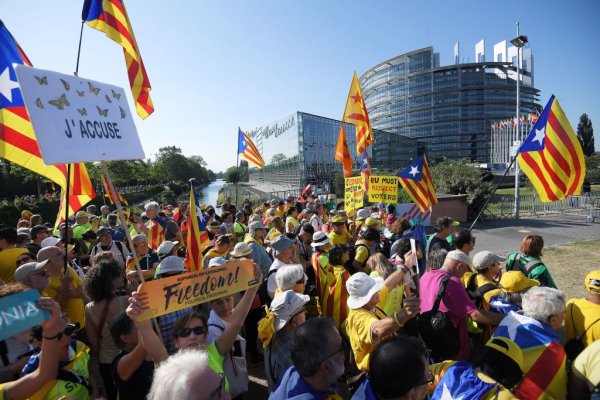 European Parliament Opens Amid Protests From Anti-EU and Separatist Groups
Next Up: Editor's Pick