Ideas
By Elliot Ackerman
Ackerman is the author of the forthcoming novel Red Dress in Black and White. He is also the author of the memoir Places and Names: On War, Revolution, and Returning and three novels. He served five tours of duty in Iraq and Afghanistan, received the Silver Star, the Bronze Star for Valor, and the Purple Heart.

In 1777, the first Fourth of July commemoration was celebrated in Philadelphia with bonfires, bells, and fireworks. The next year, 1778, General George Washington celebrated with a thirteen-gun-salute, one for each of the colonies, along with a double ration of rum for his troops. In 1779 the holiday fell on a Sunday, so it wasn’t celebrated until July 5th. In 1870, the U.S. Congress made Independence Day an unpaid holiday for federal employees, and in 1938 Congress changed Independence Day to a paid federal holiday.

In 2019, it seems President Trump would like to celebrate with a grandiose military parade. And a lot of people are upset about it. They are upset because of the cost. Because of the spectacle. Because these critics anticipate—as is likely—that Trump will politicize the event in an inappropriate, even tawdry way. He’s already expressed his intention to stand on that hallowed ground in front of the Lincoln Memorial, where Martin Luther King Jr. gave his “I Have A Dream” speech, and deliver a speech of his own. Then flanked by all four of the service chiefs (who would surely rather be with their families at a backyard barbecue), he’s planned a massive military review, replete with supersonic fighter jets screeching past overhead and each service’s anthem blaring from the loudspeakers. That’s the event he’s selling. I’d bet about half the country loves the idea and about half the country hates it. Such a celebration is, like him, a polarizing prospect. And it is the perfect manifestation of our time.

Trump’s critics are, of course, widely airing their objections to the event. And I cannot say that I disagree with their objections—that the cost is extravagant, that fetishization of our military is different than support for it, and that the strain the parade places on the D.C. government and the National Park Service is too great—but the Fourth of July has been celebrated in many different ways over the years. Trump’s the President. If he wants to do it this way, it’s his prerogative. To his most vocal critics, I’d say: If you really want to hurt Trump, ignore him and then vote him out. On a day when we celebrate all we’re capable of as Americans, ignoring Trump’s petty provocations seems to be one achievement of which we’re incapable.

But Thursday is Independence Day, and most of us will be celebrating one way or another our nation’s 243rd birthday. It’s a day that means a lot of different things to different people, and that’s okay. E pluribus unum is an apt motto for a country that has never agreed on much of anything and, perhaps, it is in our disagreement—our passionate disagreement—on how to celebrate the day that we honor our nation the most.

So, if M-1A1 Abrams tanks, the Blue Angels, and a concert on the National Mall hosted by none other than John Stamos don’t intrigue you, might I suggest participating in—or even organizing—another great American Independence Day tradition: a Horribles Parade. Begun in 1851 in Lowell, Massachusetts, at a Horribles Parade normal citizens dress up and lampoon national leaders from presidents, to senators, to governors and generals. It’s a way to celebrate our independence from the tyranny of our political class. The costumes are often gaudy, the celebrations ribald, and of a heightened vulgarity that even Trump might appreciate.

If you wanted to go even further than that, and really assert your independence, and also have a laugh at the expense of the political class who do so much to polarize us, you could do something far more low-key but every bit as subversive. You could keep your television tuned to the Weather Channel. That’s because, on Thursday, the forecast isn’t so good. They’re already saying that Trump’s parade is going to be a rainout. 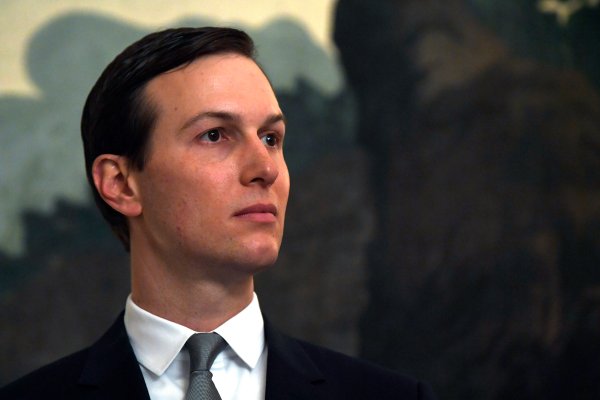 The Quick Read About… Jared Kushner’s Bahrain Workshop
Next Up: Editor's Pick