The American Medical Association is suing North Dakota to block two abortion-related laws, the latest signal the doctors’ group is shifting to a more aggressive stance as the Donald Trump administration and state conservatives ratchet up efforts to eliminate legal abortion.

The group, which represents all types of physicians in the U.S., has tended to stay on the sidelines of many controversial social issues, which, until recently, included abortion and contraception. Instead, it has focused on legislation affecting the practice and finances of large swaths of its membership.

But, says AMA President Patrice Harris, the organization feels that, in light of new state laws in the U.S. that would force doctors who perform abortions to lie to patients—put “physicians in a place where we are required by law to commit an ethical violation”—it has no choice but to take a stand. One of these laws, set to take effect Aug. 1, requires physicians in North Dakota to tell patients that medication abortions—a procedure involving two drugs taken at different times—can be reversed. The AMA said that is “a patently false and unproven claim unsupported by scientific evidence.” North Dakota is one of several states to pass such a measure.

The AMA, along with the last remaining abortion clinic in North Dakota, is also challenging an existing state law requiring doctors to tell pregnant women that an abortion terminates “the life of a whole, separate, unique, living human being.” The AMA argues in a statement on the lawsuit that law “unconstitutionally forces physicians to act as the mouthpiece of the state.”

It’s the second time this year the AMA has taken legal action on an abortion-related issue. In March, the group filed a lawsuit in Oregon in response to the Trump administration’s new rules for the federal family planning program. Those rules would, among other things, ban doctors and other health professionals from referring pregnant patients for abortions.

“The Administration is putting physicians in an untenable situation, prohibiting us from having open, frank conversations with our patients about all their health care options—a violation of patients’ rights under the [AMA’s] Code of Medical Ethics,” wrote then-AMA President Barbara McAneny.

It’s an unusually assertive stance for a group that has taken multiple positions on abortion-related issues over the years.

Mary Ziegler, a law professor at Florida State University who has written several books about abortion, says the AMA’s history on abortion is complicated. In general, she says, the AMA “didn’t want to get into the issue because of the political fallout and because historically there have been doctors in the AMA on both sides of the issue.”

In its earliest days, the AMA led the fight to outlaw abortion in the late 1800s, as doctors wanted to assert their professionalism and clear the field of “untrained” practitioners like midwives.

Abortion was not an issue for the group in the first half of the 20th century. The AMA became best known for successful fights to fend off national health insurance. Leading up to Roe v. Wade, the 1973 Supreme Court decision that legalized abortion nationwide, the AMA reentered the fray, and appeared to soften its opposition. In 1970, the AMA board called for abortion decisions to be between “a woman and her doctor.”

But the organization declined to submit a friend-of-the-court brief to the high court during its consideration of Roe. Then, in 1997, in a surprise move, the AMA endorsed a GOP-backed measure to ban what opponents called “partial-birth abortions,” a little-used procedure that anti-abortion forces likened to infanticide.

In recent years, the AMA has taken mostly a back seat on abortion issues, even ones that directly addressed physician autonomy, leaving the policy lead to specialty groups like the American College of Obstetricians and Gynecologists, which has consistently defended doctors’ rights to practice medicine as they see fit when it comes to abortion issues.

Ziegler said it is not entirely clear why the AMA has suddenly become more outspoken on women’s reproductive issues. One reason could be that the organization’s membership is skewing younger and less conservative. This year, for the first time, the AMA’s top elected officials are all women.

One reason the organization may be moving on the issue now could be shifting public opinion on abortion. In 1997, the abortion procedure ban that the AMA endorsed “polled well and allowed abortion opponents to paint the other side as extremist,” Ziegler says.

Exactly the opposite is true today, she says: most public opinion polls show a majority of Americans want abortion to remain legal in many or most cases.

Molly Duane, a lawyer from the abortion-rights legal advocacy group Center for Reproductive Rights, who is arguing the case for the AMA and North Dakota’s sole remaining abortion clinic, says the laws they’re challenging are “something all doctors should be alarmed by.… This is an unprecedented act of invading the physician-patient relationship and forcing words into the mouths of physicians.” 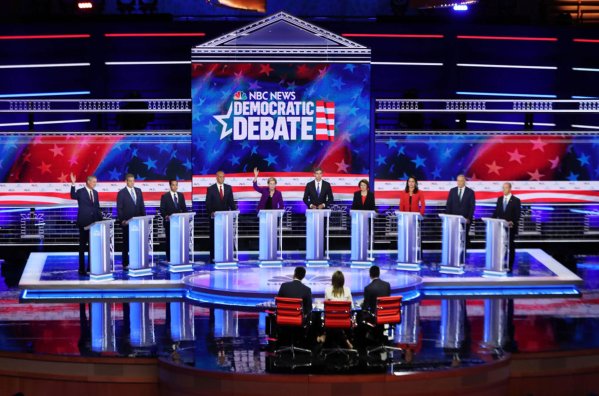 What the 2020 Democrats Can Learn From One of the Most Crowded Primary Fields in History
Next Up: Editor's Pick