Apple’s Mac Pro Was its Last Big 'Made in America' Product. Now it's Moving to China

Apple will manufacture its new Mac Pro computer in China, moving production of what had been its only major device assembled in the U.S., the Wall Street Journal reported.

The company will use Quanta Computer Inc. to make the $6,000 desktop computer and is ramping up production at a factory near Shanghai, the Journal reported Friday, citing people familiar with the matter.

The news comes as China and the U.S. are embroiled in a trade war, with the Trump administration having imposed billions of dollars in tariffs on Chinese-made goods, and threatening more tariffs that would hit Apple products. Chinese President Xi Jinping and U.S. President Donald Trump are scheduled to discuss the tariffs at a highly-anticipated meeting during the Group of 20 summit in Japan on Saturday. Trump has called out Apple specifically in the past asking it to move more of its production from China to the U.S.

“Like all of our products, the new Mac Pro is designed and engineered in California and includes components from several countries including the United States,” Apple said in a statement. “We’re proud to support manufacturing facilities in 30 US states and last year we spent $60 billion with over 9,000 suppliers across the US. Our investment and innovation supports 2 million American jobs. Final assembly is only one part of the manufacturing process.”

By producing the Mac Pro at Quanta’s facility, which is close to other Apple suppliers around Asia, it will allow Apple to take advantage of lower shipping costs than if it shipped components to the U.S., the Journal said.

For the last Mac Pro introduced in 2013, Apple Chief Executive Officer Tim Cook made a show of manufacturing the computer in Austin, Texas, as part of the company’s $100 million Made-in-the-USA push. Late last year Apple announced it would invest $1 billion to expand its operations there with a new employee campus.

But the Mac Pro caused production headaches, which slowed production and constrained Apple’s ability to make enough computers to meet demand. Three years later, some Apple engineers raised the possibility of moving production back to Asia, where it is cheaper and manufacturers have the required skills for ambitious products, a person familiar with the discussions told Bloomberg at the time.

The Mac Pro is Apple’s lowest-volume product, however the decision on where to make it comes at a particularly sensitive time. For more than a year, Apple avoided major damage from the U.S. trade war with China, thanks in part to a White House charm offensive by Cook. But the recent round of tariffs proposed by the U.S. includes mobile phones, such as the iPhone, Apple’s most-important product that is made almost entirely in China. Laptops and tablets may also be encumbered with the 25% import levy.

Cook urged the Trump administration not to proceed with the latest round of tariffs, saying it would reduce the company’s contribution to the U.S. economy.

Apple spent decades building one of the largest supply chains in the world. The company designs and sells most of its products in the U.S., but imports them from China after assembly. That makes it one of the most exposed companies to tariffs. The company may also be evaluating moving some production out of China to elsewhere in Asia, according to a recent Nikkei report. 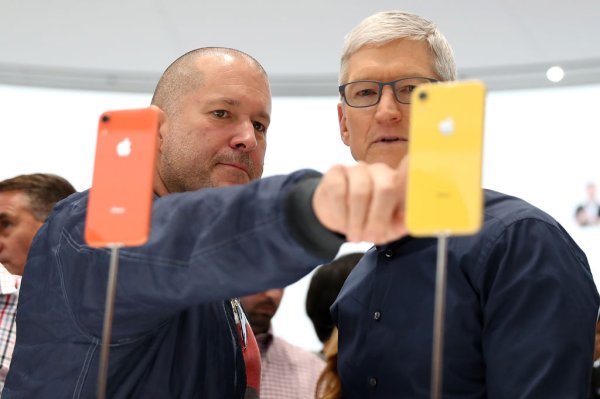 Apple Designer Jony Ive Is Leaving the Company
Next Up: Editor's Pick