President Donald Trump took a moment between meetings with world leaders in Japan to check in on the Democratic debate and lob a Twitter attack at his rivals. “All Democrats just raised their hands for giving millions of illegal aliens unlimited healthcare. How about taking care of American Citizens first!? That’s the end of that race!” Trump tweeted between meetings with Indian Prime Minister Narendra Modi and German Chancellor Angela Merkel.

When he arrived to see Merkel, Trump said he “just passed a television set” on his way to the meeting.

Trump was mostly a backdrop for Wednesday’s debate where his name was barely mentioned. But Thursday, he was a central topic from the start, and nearly every candidate disparaged his policies on taxes, health care and immigration. Senator Bernie Sanders called the president a pathological liar and a racist.

Trump’s campaign is looking to highlight issues raised in the debates that they think will play poorly with swing voters, like eliminating private insurance, repealing the tax cuts, and offering health care to undocumented immigrants. 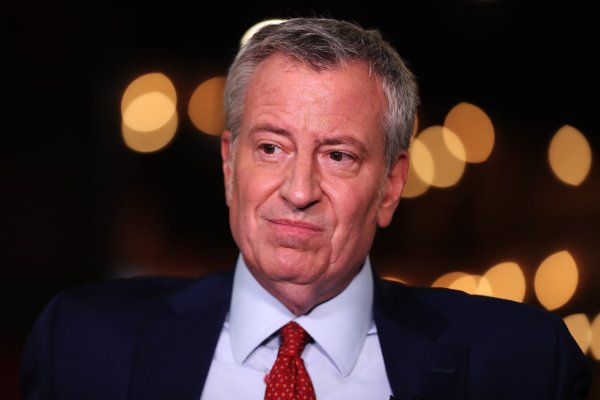 Bill de Blasio Tried His Hand at Spanish. He Ended Up in Hot Agua
Next Up: Editor's Pick