The Dalai Lama says U.S President Donald Trump has a “lack of moral principle” and should take global responsibility instead of putting America first.

Speaking with the BBC ahead of his 84th birthday, the Tibetan spiritual leader said Trump was “emotional” and “a little bit too complicated.”

He told the BBC that “One day [Trump] says something, another day he says something [else],” adding “I think, lack of moral compass.”

The Dalai Lama, who has lived in exile in India since fleeing Tibet during a failed uprising against the Chinese government 60 years ago, also chided Trump’s foreign policy. “When he became president, he expressed America first. That is wrong. America should take global responsibility,” the spiritual leader said.

In a March interview with TIME, the Dalai Lama said that Trump’s “America first” policy made him “uncomfortable.”

The exiled leader’s criticism of Trump, who he said has not requested a meeting with him, is a departure from his cordial relationships with past U.S. presidents. He has been received by every president since meeting George H. W. Bush at the White House in 1991.

The Dalai Lama also had warm encounters with Bill Clinton, George W. Bush and most recently, Barack Obama, whom he had a number of closed-door meetings with and called “a powerful example of what it means to practice compassion.”

Besides speaking on Trump, the Dalai Lama also weighed in on other topics, including Europe’s migrant crisis. “Keep Europe for Europeans,” he said, adding that the E.U. should provide education and training for refugees but that they should then return to “their own land.” 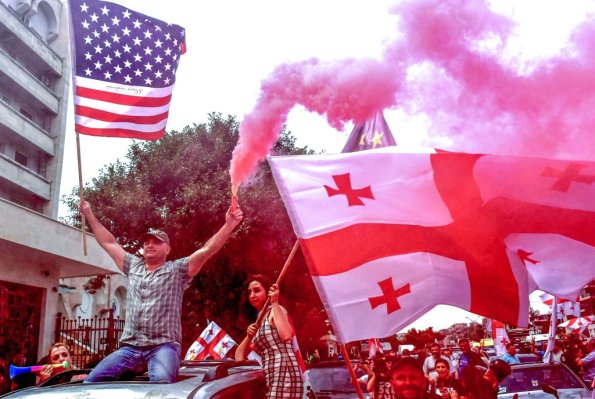 Georgians Have Now Been Protesting Russian Interference for a Week. Here's Why
Next Up: Editor's Pick